Unfinished Business: A Great Find of a 19th Century Card with an Incomplete Print Job

The 1893 Arbuckle Sports and Pastimes set is a really great trade card issue from the 19th century. It won’t satisfy all sports collectors because, while sports are featured on the cards, some in the set aren’t really sports issues. Instead of traditional sports, many of the cards feature various activities or games.

The set features various sports and pastimes that were popular in countries and different parts of the world in the late 19th century. The card for the United States, for example, features baseball. Most of the cards feature sports and activities that originated in those countries and territories.

I recently bought a collection of early trade cards and got a bunch of them as part of it. In sifting through the cards as I prepare to begin pursuit of yet another set, one in particular jumped out pretty quickly at me.

The card for Sweden, shown here, was the card in question. The Swedish card is one of those with little emphasis on sports. It does feature ice skating on the front but the other things depicted are mostly games and non-sports activities with a boating scene, picnicking, and dancing around a Maypole.

The card is very blurry and while that can be a relatively common print error seen on other early cards where quality control was not as high as it is today, it was odd for this set. This set is known for its incredible lithography with razor sharp images. Sure, I’ve seen some off cards in it but the cards are mostly incredible detailed and this one certainly wasn’t that.

Now, as a sake of comparison, here is what the card should look like. 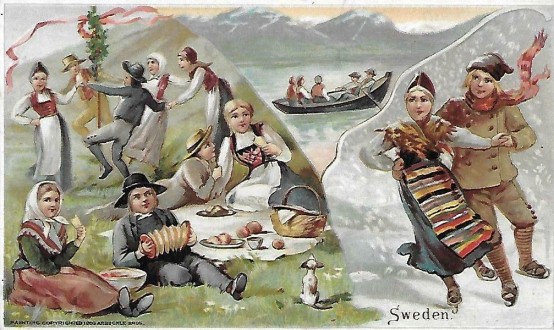 Now, if the card was simply blurry, that would be one thing. Unless it was a crazy level of blurriness, most people would consider the card to be worth less. But the first card is truly unique in that it was an unfinished print job. And we know that not only because of the level of blurriness, but also because the name ‘Sweden’ is completely missing from it entirely.

In the correct card, the Sweden name is shown beneath the ice skating pair. In the unfinished card, that name is completely omitted.

Another interesting fact is that the card appears to have been distributed to someone in the general public. Often, cards with major print errors like this are found hand cut and considered to be scraps. Printers would not have issued those cards to the public but they somehow survived as they could have merely been taken home and kept by a print shop employee or something like that. But this card with the anomaly is not hand cut, has the full back printing, and has regular factory cut edges. It appears as if it was a card that would have been distributed.

If this was part of a sheet, at least a full sheet of them would have been issued. But so far, I haven’t seen other cards from this set with the same error. How many exist today, of course, is not clear. But it’s not something you see everyday and a really great, unexpected find.