When collectors think of the most valuable cards of the 1930s, they typically will think of Babe Ruth and Lou Gehrig cards. Or, of course, the shortprinted 1933 Goudey Nap Lajoie card.

Those thoughts aren’t necessarily incorrect. Babe Ruth, as I wrote here, still ruled the 1930s from a baseball card standpoint, even though he retired halfway into the decade. And Lou Gehrig cards from the decade are usually four-figure cards if in half decent condition. But one very valuable card that is discussed less is Joe DiMaggio’s 1936 World Wide Gum rookie card.

Now, make no mistake — experienced collectors know this card. They know it well.

World Wide Gum, of course, was the equivalent of Goudey in the U.S. Goudey created baseball card sets in America and World Wide Gum produced similar sets for Canada. But while the cards were similar, there were variances. And no difference is more stark, perhaps, than the one seen between the 1936 sets.

Goudey’s 1936 set was sort of a disaster. It included only 25 cards and while there are some stars in it, it is not a massively popular set. The reality is that it is missing several key players and, while that has helped with its affordability, it is really sort of an afterthought.

While World Wide Gum’s sets were generally smaller than Goudey’s in terms of the checklist, an exception to that was in 1936. For some reason, the 1936 World Wide Gum set was massive by comparison with 135 cards. And the most important card in the set was, you guessed it, DiMaggio’s rookie card. 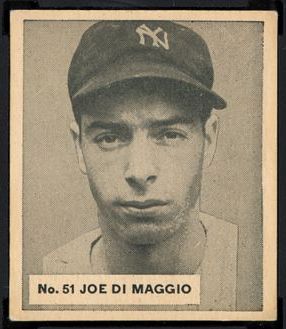 Now, it should be pointed out that the PSA 7 DiMaggio has been a hot point of discussion. It was alleged in 2017 that the card was professionally cleaned and that it was originally graded as an SGC 4. That linked thread did not end in any sort of real conclusion (in terms of the card’s fate) but it should be noted that PSA’s registry no longer shows a PSA-graded 7 DiMaggio to exist.

But I digress — while the card is known by experienced collectors, many others have no idea just how valuable it is. DiMaggio has several other rookie cards from 1936. But the majority of those are more like photos and less like cards, as I wrote in this Sports Collectors Daily article.

That, coincidentally, could play into the reason the card is so sneaky expensive. Those others were parts of sets that were miniatures photos. If you want a true DiMaggio ‘card’ in the most traditional sense, the only one that really exists is his World Wide Gum card.

DiMaggio does have earlier cards, it should be pointed out. He’s in 1934 and 1935 Zee-Nut sets, for example, and those are no doubt ‘cards.’ But they are also minor league issues and pre-dated his major league debut, making them not rookie cards to a great many collectors.

But, in addition to DiMaggio’s superstar status, the 1936 World Wide Gum card is also valuable for its rarity, of course. PSA, for example, has graded only a little more than 2,000 cards. You get an idea of how few that is given there are 135 in the set.

DiMaggio’s card has been graded by PSA only a total of 31 times (not including the PSA 7 that no longer shows up). SGC has graded 22 of them while Beckett has graded two. Add it all up and you’ve got 55 across all three grading companies. Even that number may be high given that cards may have been cracked from cases and reslabbed with different companies.

The price for the card may seem high. It feels high to me, anyway. 55 is a low number but there are certainly many rarer cards out there. But lots of cards are priced healthy. And considering this one happens to be a rookie card of one of the best players of all-time in a very tough set, that makes the high price a bit more understandable.