Many collectors know that children collecting the earliest trading cards played a variety of games with them. The games were often seen as a form of gambling because they usually involved playing for either money or for the cards themselves.

I’ve yet to definitively track down the first of these games to be played. But the earliest one that I’ve seen documented in newspapers across the country is for a game called, Crusoe.

Crusoe was documented in the March 30, 1889 issue of the San Francisco Examiner. It was described as such:

The thing that is intriguing to me is that the game spread presumably across the entire country. Several newspaper articles from all over the place referenced it and 1889 is the year where I found several articles relating to it. The game dates, then, at least back to then, and likely earlier if word of it had traveled across the country.

That last article was from San Francisco. But in June of 1889, The Fall River Daily Herald published a story that was in the New York Sun, talking about the same game being played in New York. It was described exactly as Crusoe, though technically, they just named the game as “Cards.” The New York article also gave more insight on how the cards were ‘pitched’ towards the wall, citing that it wasn’t a pitch but a ‘shoot.’ Cards were ‘shot’ with a knuckle, just as marbles were shot.

That article even mentioned some of the cards being played for, though the manufacturer names were left out. 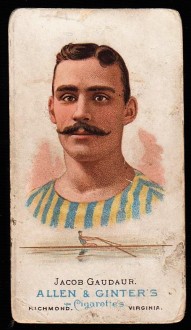 “…the schoolboy has the actresses, the pugilists, the ball players, the striped-shirted oarsmen, the famously ugly beauties.”

Pugilists, ball players, etc. — those could mean just about any set. But the striped-shirted oarsmen reference was interesting to me. See, that seems like it could reference the rowers in the 1888 Allen & Ginter N28 set. Here are a couple of those — E.A. Trickett and Jacob Gaudaur. I immediately thought of these cards when reading that.

Another interesting thing is that the game was not just played by children for cards — it was also played for money. From that aforementioned San Francisco Examiner article:

“When we’s got money we play for coin, but den we got to keep on de lookout for coppers, for dey’d throw us in the cooler for gamblin’, Ketch on? Well, when we ain’t go no stuff we play for pictur’ cards just to keep our hand in.”

The game of Crusoe being played for cards, it should also be mentioned, seemed to be largely for the poor. In addition to that reference of playing for money, other newspaper articles of the time cited that the card game was for those who could not afford to play for money. A September 1890 article in The Indianapolis Journal provided one such mention stating that the use of ‘little picture-cards that come in cigarette boxes’ were used by children not wealthy enough to risk pennies. While I have no doubt that such a popular game was played by children of all social statuses, pitching cards for pennies seemed to be, more often than not, played by children with little money to speak of.

How did they get the cards? Well, as I’ve written in other articles, children basically made nuisances of themselves, pestering cigarette-smoking adults for the cards in the packs. Many certainly even built up large collections without spending a cent. 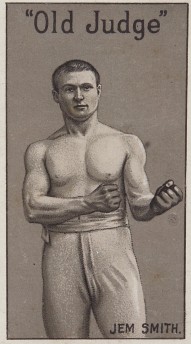 The game seemed harmless enough. Kids flipping cards — who cares, right? Well, I expect most games went off without a hitch. But sometimes, the losers didn’t give up their cards easily. The March 31, 1890 issue of The Brooklyn Citizen cited a story where a boy was badly stabbed and nearly died (he didn’t) over the game. Crusoe was not specifically cited by name but it mentioned a game that was similar to pitching pennies, which sounded a lot like our game.

“… it seems that the boys were gambling with pictures which come in cigarette packages, which they plan in a manner similar to pitching pennies. Komsuski, who was losing, accused Farren of cheating, which he later denied. During the quarrel which followed, Komsuski drew the knife and plunged the blade up to the handle in Farren’s breast.”

That’s Crusoe in a nutshell. But as a final point, the game also got me thinking about card condition.

Cards, of course, have sustained all sorts of damage over the years. But a game like this would immediately damage the cards as they would be tossed in the air with corners hitting what would presumably be hard surfaces of sidewalks/concrete, etc.

I’ve read a lot of discussion from collectors that insist some heavily worn corners are not caused by natural damage. And surely, not all. Some, I imagine, are the result of corners that have been clipped/cut and then worn down over time. But a game like this that was played frequently, surely over many years, with corners repeatedly hitting against hard surfaces also makes heavy corner wear somewhat easy to imagine.