The T218 Champions set is one of the more popular multi-sport sets from the pre-war era. No, it doesn’t come close to the desirability of the 19th Century champions sets or later issues like the 1933 Goudey Sport Kings release because those sets included baseball players. But of the multi-sport releases that does not feature one of the four major American sports, it possibly sits at the top of the heap.

Instead of sports like baseball and football, T218 is mostly headlined by the boxers found in it — most notably, Jack Johnson, who has two cards. But in addition to a slew of less popular track and field athletes, the set is also known for its oddities. There are bowlers, billiards players, swimmers, and aviators, you see. And there’s also a single pedestrian named Edward Payson Weston.

Wait, a pedestrian? Isn’t that just a … 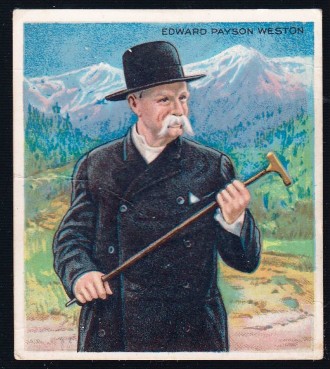 But in Weston’s era, pedestrians were actually competitive walkers. Like, walking was a sport and had champions and everything. And, as lame as it might seem, these were grueling competitions that lasted days or even weeks. Sometimes, these guys walked for months. Consider this — Weston made a trip from New York to San Francisco covering approximately 4,000 miles in 1909 over a period of about 3 1/2 months. In 1910, he went from Los Angeles to New York (approximately 3,600 miles). And if you think he was in the prime of his career at that point, think again. He was 71 when he made that last trip.  Here’s a really great look at Weston and the sport.

But Weston didn’t just walk because he wanted to be competitive. He believed it was essential for a healthy life. As automobiles started being used, he was concerned that people would become unhealthy and lazy. Weston continually promoted walking as something that was absolutely critical. Weston lived a life of fame and was one of the most famous athletes on the planet in the 19th century. He was, somewhat ironically, hit by a cab in 1927 and would never walk again, dying a few days later.

And believe it or not, even though ‘walking’ isn’t a real exciting activity by the standards of today, Weston’s cards in the set are near the top in the set in terms of popularity.

Why, exactly, are the cards so popular? For one thing, they are in the T218 Champions set, again, a fairly popular multi-sport issue. For another, Weston is found on few cards and this is far his most common one. Weston did make his way onto some 19th cabinet cards and later, RPPC postcards. But in terms of traditional trading cards, his T218 is really ‘it.’ Plus, the card’s popularity is helped because competitive walking is such an off the wall topic and, some collectors just like really odd stuff. Add it all up and you’ve got a really interesting card.

So, how much can you expect to pay for a Weston? Well, the cards aren’t hundreds of dollars. The most expensive card in the set is the front view pose of Jack Johnson’s card and even that one can be bought in low-grade condition under $50. But Weston’s cards are worth more than most of the other cards in the set and are on part with the golf cards, which probably rank behind Johnson’s two cards.

Prices can be all over the map. I’ve seen low-grade Westons sell for about $10 and I’ve seen similar ones sell for more than $20. Part of the reason for that is because his cards can be tough to track down and asking prices can sometimes be higher. For example, as of right now, there’s not a single card of Weston on eBay. Meanwhile, as a point of comparison, Charles Weston, a billiards player in the set is a somewhat tough card and has five examples there now.

The Weston T218 card is not an expensive one — but it is undoubtedly one of the most popular cards in the set. 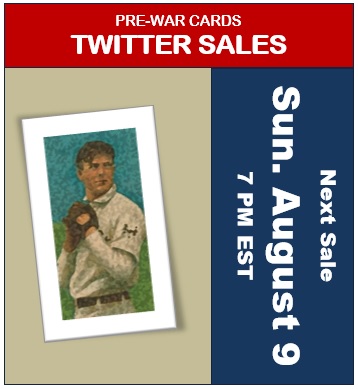