In 1913, Pan Handle Scrap tobacco issued two sets of champions cards with their scrap tobacco products. I’ve never seen much really written on these cards so thought it was worth a review of both.

The most distinctive part of both sets is their unique look. Each set has the same layout with black and white images of the athletes and an orange border. The orange borders are really what make these cards stand out from others in the era with most tobacco card sets at the time featuring white borders.

As I wrote here, some sets certainly did utilize different colored borders. But borders like these orange ones on cards were really uncommon.

So what are these cards? Let’s take a look. Part I will look at the T221 Champion Women Swimmers set and Part II will review the T230 Champions set. 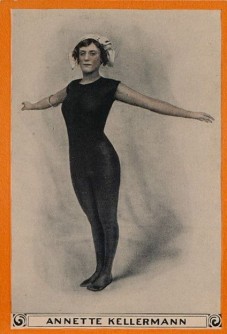 This set was the first of the two classified sets in Jefferson Burdick’s American Card Catalog. The cards, as stated by the title, featured female swimming champions. You might only expect a handful of cards to be here based on that topic but the set was actually quite large with 100 total cards.

Now, if we’re being honest, the names are not too recognizable to people today. I don’t even know that many people could identify, say, ten current swimmers. Even if they could, swimming cards are even less on the radar and given that these were issued more than 100 years ago, um, yeah. Good luck with identifying most of the ladies in this set, even if they were very good athletes.

Burdick describes these cards in his book as ‘large’ and, compared to other tobacco card sets at the time, that’s true. At about 2 1/2″ wide by 3 11/16″ tall, they were significantly larger than most other tobacco issues. In fact, that size is actually slightly larger than today’s standard trading cards.

Backs of the cards varied. The style remained the same but some included a description of specific techniques while others had biographies of the swimmers. Regardless of the make up of the text, all cards had an advertisement for Pan Handle Scrap at the bottom that read, “We believe we have produced in Pan Handle Scrap the finest chew that has ever been offered.”

While the cards were issued free with the scrap tobacco, I haven’t seen any indication of how many cards were included in each package.

While there were 100 cards in the set, there were not actually 100 different swimmers featured. That’s kind of a relief.

Four women were featured on ten different cards for the first 40 in the set — Rose Pitonof, Miss Ideal, Odiva, and Annette Kellermann. That might seem a bit odd but we’ve actually seen similar patterns in other sets. Take, for example, the 1912 Gallaher Sports set. That set also had 100 cards and it was mostly broken out by tens — one sport represented on ten different cards.

The consensus is that the first 40 cards are easier to find than the last 60. That leads us to believe, obviously, the first series was printed in greater numbers.

Anyway, these 40 cards were actually considered the first series while a second series included 60 cards of various other women and poses. We know that these are really two different series’ because coupons were printed, announcing the second series of these cards. The second series included 51 more cards of swimmers (Cards No. 41 through 91 — several women were featured more than once) and five final cards (No. 96 through 100) featuring pictures of life saving poses.

Kellermann is the most recognizable name in the set and that’s probably because she was also an actress. In fact, according to her very fine Wikipedia entry, she was the first major actress to appear nude in a Hollywood film, was one of the first women to wear a one-piece bathing suit, and she had her own fashion line of swimsuits.

Her swimming ability was sort of the result of a disability. Her legs were weak as a child and she wore steel braces. She began swimming to strengthen them and she became a championship swimmer.

Here’s a great look at pictures of all 100 cards in the set. 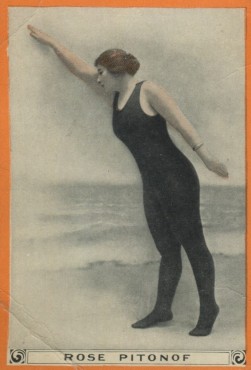 A variation exists in the set for Card No. 7.

Rose Pitonof, a marathon swimmer, is featured on the opening cards in the set, No. 1-10. There are two known variations of her No. 7 card, as shown here.

The fronts on both cards are the same. However, one back has a general description of swimming while the other discusses long distance swimming. Unfortunately, the cards in this set are so difficult to find, making a real projection on which card is rarer seems tough to do.

So, given that, which is the error and which is the correction? Neither back is known to be repeated in the first series but the general description back was also used on No. 89 in the second series, a card for a swimmer named Jessie Sutherland. And given that Pitonof was a marathon swimmer, the long distance back more appropriately belongs on hers.

I don’t know that one of the Pitonof backs should really be considered a mistake, per se. But since the general swimming writeup is found on a different card later in the set, the ‘correct’ Pitonof card, if there can be one, is probably the one featuring the long distance swimming description.

Finally, it should be noted that this set is so rare that it is possible that other variations exist.

These cards are fairly rare. You’ll typically find a few on eBay but they are not seen all that often elsewhere, to be honest.

The pop reports aren’t all that helpful because not many collectors will take the time to get these cards graded. But it’s easy to see from listings on eBay and other outlets that the cards are somewhat difficult to come by.

Rarity, though, doesn’t always correlate to value, as we know, and that’s certainly the case here. Demand for these cards is not too high and low-grade cards typically sell in the $5-$10 range. Kellermann cards can sell for a bit more, though, because of her popularity.