I didn’t have a lot of rare, off the wall pickups this month like I sometimes do. This month really focused on finding some more common types of cards (at least for me) for various purposes.

Still, I like to highlight cards that I pick up and stuff that is common to me might be new to you. So let’s have a look.

First off is a card I got as part of a trade — a Fred Clarke T206 portrait. I had a friend offer this as a trade just out of the blue. It was a nice card but he just didn’t particularly need it. And while I had one in my set, it was kind of a sore spot for me. See, I’d had a graded 2 that I traded away (for something else) and ended up getting a low-grade one instead (left). I’d had that card in my binder and while I don’t mind low-grade cards at all, it just irked me because I’d once had a much nicer one that I let go for a price a bit on the low end.

The card I traded for (right) is just much cleaner. It is almost certainly trimmed but still a much nicer card than what I had before. So this was one of those upgrades I just love. I would have liked to upgrade my Clarke as it was and being able to trade for one as opposed to having to buy it was a bonus.

The reality is that, while I have upgraded many cards in my T206 set (probably around 150), I still have a great many I’d like to upgrade. But the increase of the set’s value over the past few years has made that difficult as I’d simply rather spend my money buying cards I need in other sets as opposed to upgrading this one. So it’s always nice when I can upgrade Hall of Famer cards that I otherwise would probably not be interested in buying. 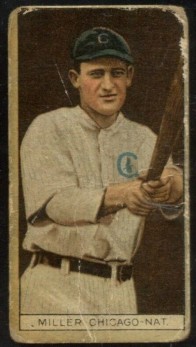 So, what about actual buys? By biggest purchase of the month by far was this T207 Ward Miller.

Now, Miller’s card, along with cards of Irving Lewis and Louis Lowdermilk, collectively represent what is the T207’s Big Three. As I wrote here, the cards aren’t necessarily the rarest. But they are the long-held rarities of the set and, as a result, pretty expensive.

Those three players are all pretty obscure, yet are generally the most valuable cards in the set. Miller is not a known player to many collectors but had the most successful major league career, lasting eight seasons while hitting a respectable .278.

I was able to get the Miller card at what I considered to be a good price and negotiated with a seller on it. It was a card I was very excited to get as it gets me to within two cards of completing the basic 200-card T207 set. That would complete my T205, T206, and T207 run and, well, allow me to breathe a little bit as I’ve been working on these three sets for almost five years now.

The other two cards I need? Of course, Lowdermilk and Lewis.

Speaking of T207 cards, I did not stop with Miller. I always like buying cards that are a bit tougher if I can find them at the right price.

Such was the case with this card of Ben Houser.

Houser is one of those sneaky tough cards in the T207 set. When the set’s rarities are discussed, his card is often not brought up — but it should be.

How tough is the Houser card? While that might be a difficult question to answer, the PSA population report gives us a good idea. Only a handful of cards have been graded less than Houser’s card, which has been graded only 16 times. And even the ones that have been graded fewer times haven’t been graded significantly less. The Houser, like several others in the set, is very tough, folks.

I bought a Houser on eBay for my set a couple of years ago on eBay and have barely seen the card resurface there since. There is one on eBay right now, coincidentally, but it looks like it may have been part of a set break or near set break. It is just one of those cards I bought because I found value in it, given the rarity and despite its condition. 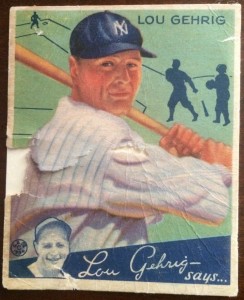 Like the Miller, another big set buy came in the way of this Lou Gehrig 1934 Goudey card.

This is, of course, one of Gehrig’s two cards in the set. While the large portrait shot of Gehrig with the bright yellow background is probably the more well known of the two, this one with a batting pose is a rarer and more valuable one. As Babe Ruth is not in the set, it is the key card and the most valuable one.

Like some other big purchases I make, I was able to find this one on a budget as it is skinned and rebacked with a piece of cardboard. It’s not a great looking card but has a clear front image and, when graded by SGC, will be even more presentable.

Plus, it really fits for my set, which is about 1/4 of the way complete. My focus is really on earlier tobacco and candy card sets but I tentatively began working on a complete Goudey run of their 1933, 1934, 1935, 1936, and 1938 sets. I have completed the 1935 and 1936 sets, which are pretty small but have been slowly working on the others. These are not high priority sets for me even in the slightest but I do try to make progress on them when I can.

So getting this Gehrig out of the way, even though it’s very low-grade, is a nice way to advance that goal without spending a ton of money.

That’s it for the more expensive stuff. Next were a few cheaper buys. 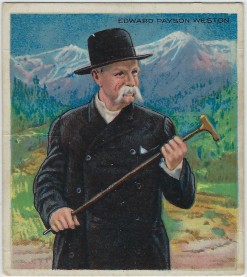 Two of those were a pair of T218 Champions cards of noted pedestrian, Edward Payson Weston.

The T218 set is known for its boxing cards, as well as cards of golfers and some more obscure types of athletes, including bowlers, billiards players, and aviators. Then there’s Weston, who was a noted pedestrian.

Pedestrian athletes were known for their ability in walking. The sport involved covering great distances and while it might sound somewhat silly today, it was an incredibly popular sport in the late 1800s.

Weston’s card is one that has gained in popularity over the years. It is not as popular or valuable as those of Hall of Famer boxer Jack Johnson, but it is becoming one of the more sought after cards in the set. I picked this one up as an upgrade for my first T218 set (I have a complete set and am more than 2/3 of the way through a second). I then found a second one as well and with four of these suckers, now am working on a mini hoard. It’s one of those cards I will always buy if it’s cheap.

Had a very cool pickup in a bunch of 19th century Victorian Die-Cut cards of tennis players.

Many pre-war collectors can tell you about the baseball set of die-cuts from the Raphael Tuck Sons company but hardly any will know about the tennis ones.

Tuck’s name does not appear on these but since they are in the same style as a cricket set also produced by the company, they are almost certainly another Tuck set.

I picked these up as part of a larger lot of die-cuts, which included cricketers and some non-sports subjects. I got them for a steal as they went virtually unnoticed. As I said before, these are not part of a set that many are familiar with. But nice ones can sell in the $20-$30 range and there is demand for them. I managed to land seven of them along with several duplicates.

How many are in the set I cannot say. Tuck created a set of rugby players, that had eight cards, and a set of cricketers that had six. The baseball set of Tuck die-cuts had ten players. The sizes varied and until I see a confirmed checklist on these cards, it’s impossible to say how may exist. But given how many were in other sets, I appear to have this one pretty complete. I’ve still got to research these a bit, though, so if anyone has any ideas, give me a shout. 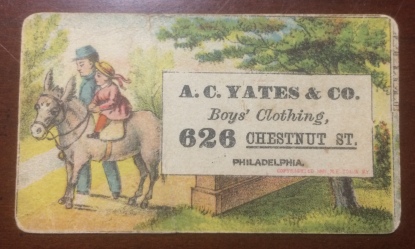 Finally, a really unique card I found was actually a non-sports trade card.

So what makes this one so special? After all, there are tens of thousands of trade cards out there with all sorts of pictures on them. Well, this one is actually part of a set that includes a baseball card.

The 1881 Tobin baseball card is often considered to be a standalone issue. However, that’s not true — it is part of a set with several other non-sports cards, in it.

This is one of those cards. It is about the size of a business card, so smaller than most other trade cards. It features a scene with a man and a young girl, who is riding a horse. It has the same layout as the baseball card from this set, which links them together.

I have the baseball card from this set and had never really thought about pursuing the others. They are not easy to find but with this one in the fold, I will probably start looking a bit harder for them. As of now, there are only two others that I know of in the set.