Are these 1880s Duke Tobacco cards the first to depict card collecting?

Trade cards, cards that basically served as business cards or advertisements, are generally considered to be the first true cards. After that came tobacco cards and that’s when things really began to take off. In addition to serving as stiffeners for cigarette packages, the cards were mostly intended as inserts to help sell tobacco and before long, people were collecting them. As I’ve written about before, that sort of created problems and not all people thought the hobby was an admirable one. But that’s another story for another time.

Tobacco cards became popular in the 1880s with the introduction of cards, such as the Old Judge series. But soon, all sorts of tobacco cards were springing up, including both sports and non-sports issues. And there are at least two early tobacco cards that show the practice of, well, card collecting. 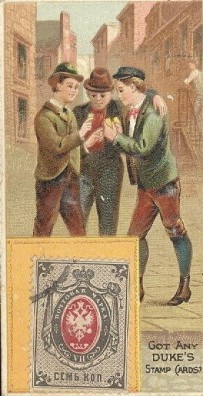 The N85 Duke Postage Stamps set is not one I was too familiar with until only recently. I wrote about it here — these cards for Duke Tobacco were unique because they included a real life postage stamp. As I said in that linked article, I called them a sort of relic card. Issued in 1889, I took a fascination with this set because it had a Pony Express card in it and, well, I love me some Pony Express.

So, my curiosity got the best of me and I had to see more of the cards in the set. The set really focuses on mail delivery in different parts of the world (hence the postage stamps) so it’s not necessarily the most exciting of sets — especially for collectors just into sports cards. But then I stumbled upon this card.

This card in the set is one that does not focus on mail delivery. Instead, it focuses on three children actually collecting the Duke cards. We know that because of the small caption at the bottom entitled, “Got any Duke’s Stamp Cards?” The children are shown holding some of the cards. 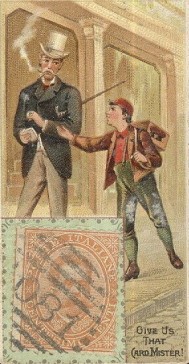 A second similar card exists, too. This one was brought to my attention by a reader and depicts a similar picture of the cards being collected.

As I wrote before, one of the ‘problems’ with early card collecting was that children would often pester adults buying tobacco for their cigarette cards. This card shows exactly that with a youngster pursuing an older man. The title of the card reads, “Give us that card, Mister!”

These are just really cool depictions of early card collecting. And while there are undoubtedly others that show that, these may be the earliest tobacco cards that show actual collecting taking place. Even if they are not technically the first, they are certainly among the earlier instances of it. That makes them somewhat unique and something a lot of card collectors would be interested in, I imagine.

The good news? Despite being more than 130 years old, the cards are pretty cheap. In lower grade, you can find it in the $5-$10 range and even nicer ones aren’t too much more.