A 1950s magazine decided to remake a classic pre-war baseball card and, well …

So, I’ve got nothing against reprints, really. Generally, they are not for me. But I understand the appeal and clearly can empathize with collectors wanting a replica of a very expensive card they may never be able to otherwise afford. As I wrote here, there probably need to be some sort of guidelines for reprints to follow.

Today, modern reprints of pre-war cards are often inexpensive and often are not pursued by serious collectors. And given that some of these reprints can be turned into realistic fakes of early cards, some collectors even wish they didn’t exist. I can understand that side of it, too.

But while modern reprints may not be all that desirable to a lot of collectors, some certainly are. And a 1950s remake of a popular pre-war card featuring Ty Cobb does often garner some interest.

Gentry Magazine was not a publication I was familiar with. In doing some digging, it was a 1950s publication geared towards men. One of the unique qualities of the publication was to include actual items or samples inside of it.

This site has a wonderful history of the publication. But essentially, Gentry was a lavish magazine that spared no expense with the inclusion of all sorts of premiums in its magazines, including fabric samples, booklets, and in at least one case, a baseball card. The magazine usually included a hodgepodge of topics that one might find interesting.

In the Fall 1956 issue of the quarterly publication, Gentry offered a rather unique card, among an assortment of other sections, including fashion, photography, a map of Africa, tiger hunting, and literature. To non-collectors, nothing about the card would have been familiar except the name of the subject, Ty Cobb. But for any of the publications readers that collected early baseball cards, the style would have been overwhelmingly familiar. It was essentially a remake of Cobb’s T202 and T205 cards.

The card is interesting for a few reasons. For one thing, the card features Cobb, one of the most widely collected baseball players in the pre-war era. His popularity in that era, perhaps, is exceeded only by Babe Ruth.

But the card is also popular because of its age. Unlike more modern reprints issued in the 1980s, 1990s, and the 21st century, these cards were issued in 1956 — nearly 65 years ago. They are predictably kind of a hit with vintage collectors because, well, they’re vintage cards.

The cards are clearly done in the style of the T202 Hassan Triple Folder cards from 1912. And that, of course, means that they are done in the same style as the 1911 T205 cards. Using a colorized photograph of Cobb instead of lithography and measuring a larger 2 1/4″ x 4″, it is not identical to the original T205 printing. But the design with the baseball diamond and equipment/banner at the bottom is, of course, practically identical.

In 1911, the American Tobacco Company issued the T205 gold border set. Today, it remains one of the most popular baseball card sets across all eras that was ever produced.

The following year, Hassan distributed a unique style of card consisting of three parts. The middle portion was a black and white picture but the two end panels were basically T205 cards. They measure slightly smaller and have white borders but the images used on them, as well as the design, were the same ones found in T205. Because of that, those two sets are forever linked — even if the actual style or layout of the two cards is drastically different.

This card of Cobb for Gentry Magazine, if nothing else, mimics the T202/T205 design. 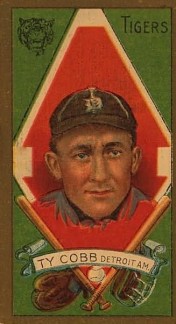 While this card of Cobb utilizes the T202/T205 design, it is important to point out that this is not technically a reprint.

That might surprise some people at first. But if you look at the Gentry card vs. the images of the T202 and T205 cards, you can easily see that they are not the same. And since they aren’t the same images, the Gentry card cannot be a reprint.

Like other American League cards in those sets, Cobb was given a portrait pose with only a headshot. Here’s a picture of Cobb’s T202 panel (left) as well as his gold border T205 card (right) for comparison.

Cobb’s card in the Gentry Magazine issue is also a portrait but includes a bit more of his upper body and is a different picture altogether. And, as stated above, the Gentry card uses a real picture of Cobb while his T202/T205 cards featured lithography prints instead.

This is simply a vintage Cobb card with a T202/T205 design and not a reprint of his original cards in those sets. But the similarity in design, of course, was intended to copy those issues. The magazine itself even indirectly says as much by calling it a Cobb cigarette card.

So, what are my thoughts on the Gentry card?

I mean, it’s not bad. Obviously the design is a complete remake of T202/T205 and, if we’re being honest here, that’s not a terrible way to go. As I said earlier, T205, in particular, is one of the most popular baseball card releases of all time. It’s also better than assigning that design to a then current player from the 1950s like Mickey Mantle or Willie Mays.

Still, as someone that collects old cards and has an affinity for T205, the card just still screams ‘fake.’ There’s the poor print quality and the lily white borders — not to mention the different picture of Cobb that is used. I can’t separate this from a T202/T205 card just because I’m so familiar with those. And for me, that makes it a hard pass.

But again, it doesn’t need to appeal to me. There’s interest in the card because it’s not a super modern reprint — rather, a vintage variation of sorts of an old classic. And I can understand its desirability.

So what more can we say about the card? Specifically, how rare is it and what is it worth?

When trying to determine rarity, I usually start with the population reports of PSA, SGC, and Beckett. And if you go by simply that information, it appears that the card is quite rare. Collectively, the three haven’t even graded a total of ten of them to date.

Straight pop reports are helpful but don’t always tell the whole story. Another good indicator is availability on eBay and they usually have few of the cards. To call the card scarce is probably going a step too far. But the card does appear to be genuinely hard to find — especially considering it’s from the 1950s and not during Cobb’s playing days.

Despite that, prices for it are entirely reasonable. The card usually sells somewhere in the $25-$50 range and even the entire publication can be bought for about $50-$75.

If you’re not enamored with later Cobb cards and want something a bit older without a high price tag, this card is a good option. It’s a clear vintage card that is also a pretty rare one to boot.