Are there some real athletes hidden in this 1920s tobacco card set? 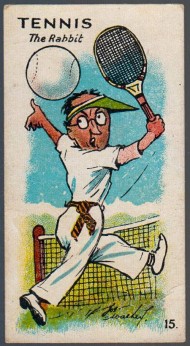 The 1928 Major Drapkin Sporting Snap set includes a total of 40 cards with ten sports represented. Each sport got four cards and the keys are generally the four baseball cards in it. These were tobacco cards but actually also a deck of cards to be used as part of a matching game.

Most of the subjects are considered to be generic ones and unfortunately, there doesn’t seem to be much of a correlation between the baseball cards and real baseball players. But a few of the others could indeed be modeled after real, live athletes.

The most obvious one is tennis Hall of Famer Bunny Austin. Austin was ranked as high as No. 2 in the world and was a two-time Wimbledon finalist. Named Henry Wilfred Austin, he was nicknamed ‘Bunny’ after a comic strip featuring a rabbit named Wilfred. He was generally called ‘Bunny’ or ‘Rabbit.’

Two of the tennis cards in the set feature specific shots — the service (or serve) and the kill. A third depicts an umpire. The fourth, though, shows a player called ‘The Rabbit.’

While Austin is not formally named on the card, this one would appear to be a depiction of him. He was playing tennis at the time, was perhaps the only tennis player using that nickname (certainly, the most famous one), and was a player from the UK, the originating country of this set. Ironically, Austin is pictured wearing pants and he would later become the first men’s player to wear shorts at Wimbledon:

When Austin started playing tennis, men wore long, heavy white flannel trousers, no matter how hot it was. ”Fred Perry and I were playing in the doubles at Longwood, and it was terribly hot,” Austin told The Boston Globe in 1997, referring to a match at the club in Brookline, Mass. ”I came off the court in those sweat-soaked trousers feeling I was carrying an awfully lot of unnecessary weight below my knees.”

Referring to his days as a soccer player, Austin added: ”I wasn’t very big. I’d been a football player in school — Repton and Cambridge — and of course we wore shorts. Best thing for running. Why not for tennis? We went to New York for the singles at Forest Hills, and I bought a pair and wore them. I got a lot of kidding, but the wisdom of it was apparent. The next year, I introduced them at Wimbledon. I expected a fuss there, but there was none. Slowly, others followed. I don’t know why we put up with long flannel trousers for so long.”

Then, there are some less definitive ones.

Two that come to mind are the ‘Winner’ and ‘Loser’ cards in the boxing subset. Again, we’ve got no name on either card. But some collectors have taken to the belief that these cards depict Hall of Famers Gene Tunney and Jack Dempsey.

For one thing, the card of the winner has a similar likeness to Tunney. For another, the two had just participated in one of the most famous matches in boxing history in the ‘Long Count’ fight.

In that bout, Dempsey knocked down Tunney but the referee’s count was delayed. Some observers believe that Tunney was given more time to recover. He would ultimately beat the ten count and then come back to defeat Dempsey.

Do these cards depict Tunney and Dempsey? Given the timing of the set and proximity to that world famous fight, combined with the winner card seemingly featuring Tunney, I believe it’s possible. And I have seen the cards advertised as Dempsey/Tunney cards, too. Still, without definitive proof, it’s impossible to say.

Another one along those lines is one of the golf cards.

The card shown here is titled, ‘The Pro.’ That term, of course, could mean a couple of different things. It could mean the designated pro at a specific golf club. Or it could simply mean a golf professional.

Whatever the case, I have seen this card advertised as one depicting the legendary Bobby Jones. This one is a tougher sell than even the boxing cards of Dempsey and Tunney because there’s no real link.

The greatest argument for calling this a Jones card is probably that Jones was arguably the most famous golfer at the time. In 1927, the year before this set was issued, he won The British Open (The Open Championship) and, of course, this was a UK set. He also won the event the year before, as well as the U.S. Open.

Now, does it look like Jones? Well, there are some features here that look similar to Jones. It’s just not enough to make it conclusive in any meaningful way.

Finally, there’s one other golf card that certainly does represent a specific subject. The catch here, though, is that the golfer pictured is a fictional one.

The name ‘Colonel Bogey’ is often affiliated with a song call the ‘Colonel Bogey March.’ However, the song was supposedly inspired by a military man that also was a golfer.

Whether or not Colonel Bogey was based off of a real person is not entirely known. However, this card certainly depicts the fictional Colonel Bogey character as indicated by its title. The card depicts an older golfer in mid-swing and, like the other golf cards, is one of the more sought after cards in the set.