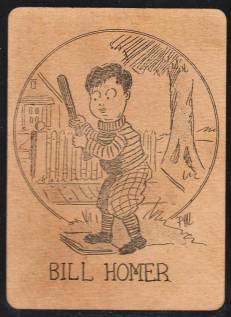 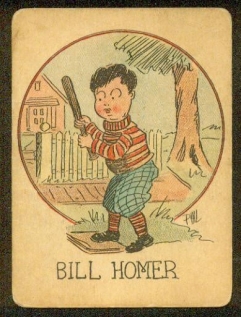 Old Maid is probably one of the most popular card games of all time. In the game, players are required to find matches of subjects without obtaining the dreaded Old Maid card.

The game has been produced heavily over the years numerous versions being issued. The subjects in the set are almost always humorous to a degree with cartoon depictions and usually are generic and unnamed.

Most subjects are not related to sports but on occasion, you’ll find one in a game that is. And at least two baseball cards are known in early forms of the game.

Both ‘players’ have the last name of ‘Homer’ — an obvious play on words for the term home run. One is named Bill Homer and the other, Harry Homer.

Bill Homer’s card features him wearing a sweater, baseball pants, and striped socks while awkwardly holding a bat with his hands apart. If you look closely, you can even see the baseball that is near him before he’s even really prepared to swing. He’s also standing directly on the base and it appears that the artist for this card may have had a very loose understanding of the game of baseball.

Of note with relation to Bill’s card is that an uncolored variation exists. While the color cards are not too hard to find, I have seen a grand total of only one of the uncolored versions (in my collection). It is unknown if the card is a proof or from a separate style of the game that was issued. But it does not have a playing card design on the back as are found on the other Old Maid cards and is blank-backed instead. 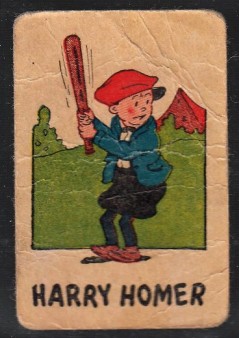 The card for Harry is a bit more realistic in terms of being a true baseball picture.

Shown here, Harry is holding the bat a bit more appropriately, hands together and choking up a bit. He’s not standing on a base an if I’m taking one of these guys to hit a home run with my life on the line, I’m clearly going with Harry.

My images of the cards in my collection don’t really give a great idea of the actual size of the cards. But they are vastly different.

I haven’t been able to conclusively date either set. However, they are generally cited as being from 1920s or 1930s games. More specifically, I have seen the set where Bill’s card resides listed as a 1920s game while Harry’s being from a 1930s game. Again, though, nothing conclusive and Old Maid’s popularity doesn’t help too much with the dating. Originating in the UK, it’s reportedly been around since the 19th century and is still being made to this day.

Both are great early collectibles that relatively inexpensive. You can’t always find these card but the complete games to which they belong can be found for as little as $15-$25. That said, you can expect to pay perhaps that much from a baseball card dealer due to their somewhat rare nature.