As Documented on Early Cards, Umpiring is a Hard Business

Early baseball cards depict the rough life of an umpire

Umpiring or officiating in any sport can mean lots of trouble. And early baseball cards give us a pretty clear idea of that as baseball umpires have been derided since, well, the beginning of the sport.

The earliest baseball cards were trade/advertising cards from the 1800s and we see references to umpires treated badly even then.

The H804-3 Bufford set gives us one of the earliest known cards depicting the abuse of umpires. This unique set is believed to have been produced in 1888 and was created by J.H. Bufford and Sons, one of the more popular lithographers of early baseball trade issues.

The card, depicted here, shows an umpire being carried off by players of both teams. It’s not a celebratory gesture, obviously, and the title, “The Umpire’s Lot not a Happy One,” is a good indication of that.

That there are only four cards in this short and somewhat rare set is a good indication of just how important the umpire was viewed.

Another umpire card is found in the H804-15 Red Border set. There are actually two umpires in this set (that is split into two subsets).

The red border cards are among the more popular trade issues. They are distinguished not by the maker of them, rather, by a thin red border. This design style was also used on other trade cards as well.

One of the cards in the series depicts a frazzled umpire, dressed well but clearly stressed out. Also of note is that, like the H804-3 card, the emphasis is that he is the target of punishment from players on two opposing teams.

Like the H804-3 cards, these are not scarce. However, they are fairly difficult to track down.

Badgering umpires continued into the 19th century tobacco cards, too.

One of the most popular ones is found in the N86 Duke Perilous Occupations set. This set includes workers in any number of difficult jobs and, you guessed it, umpiring is one of those.

This unique card is titled, “A Bad Decision by the Umpire,” and shows said ump being chased by players. The back of the card gives some more insight into the thankless job:

“Base ball is a game for the people, and good wholesome sport. The materials are inexpensive, and all that is wanted is a field. It takes the stoop from the shoulders, puts hard honest muscle all over the frame, and frequently gives the player hard knocks and dangerous falls. Sometimes the umpire holds a thankless position. In his anxiety to see that the provisions of the rules are observed – to judge good and bad balls, put outs and runs – he is liable to make mistakes, and sometimes, as in the picture, he is chased off the field. But the breeze soon blows over.”

I wrote more about the card and its specifics here.

Poking fun at umpires predictably spilled over into the 20th century cards, too. The practice was even seen in international sets. 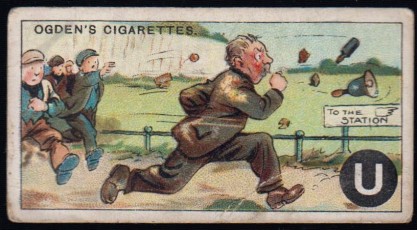 One of those is a somewhat obscure set, the 1927 Ogden ABC of Sport set. Ogden’s issued a ton of sets over several decades and this one feaures a different sport for each letter of the alphabet.

For the letter U, we are treated to a card depicting an umpire being chased by several men. Our American mindset makes us think of baseball when we see this but the sport is unidentified. And given that the card was produced overseas, one could even suggest that the sport is unlikely to be America’s pastime (even though baseball was being played in England at the time).

Different country and different sport — yet the hostility towards umpires remained the same.

A final international card suggesting the tough life of an umpire is found in another somewhat obscure set from Canada.

Cataloged as V49, these cards are believed to have been issued in the 1930s by Lowney’s Chocolate.

The set is known as ‘Just Kids’ as all of the cards in it depict children in a number of activities. It is primarily a non-sports set but there are two baseball cards in it and one depicts an umpire.

Even at an early age, children were not immune to poor treatment if they were the umpire. The card in this set shows an umpire weighing his decision as one team declares a runner out while another insists he’s safe.

There are surely plenty of other cards that may be discussed in this space. The theme, however, remains the same — umpiring can be a tough gig.