Today, relic cards are some of the most sought after modern issues. These cards, containing pieces of game-used equipment or game-worn uniforms, heavily desired by modern collectors. The luster has worn off a bit since cards with game-used bats and game-used jerseys are quite common today. But they remain highly popular ‘chase’ cards.

While most look at relic cards as being a fairly new phenomenon, in the late 1800s, an intriguing set was created that likely featured some of the earliest ‘relic’ cards of a sort. 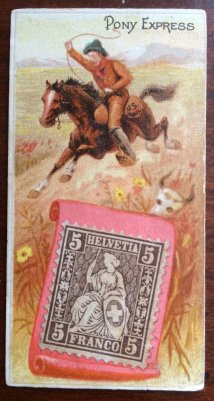 In the late 1880s, card collecting was beginning to take off, thanks to companies like Duke Tobacco, which were printing an endless string of cards. Duke produced some sports cards but they also issued a slew of non-sports issues. Among them was a really interesting issue from 1889 — the Duke Postage Stamps set, classified as N85 in the American Card Catalog. The card were issued in packages of Duke’s branded cigarettes.

A grand total of 50 cards were in the set, which was on par with several other issues. Like other 19th century tobacco cards, these are printed on card stock that is a bit thicker. And similar to other issues from the same era, that has helped their durability over time. In general, each card has some sort of mail delivery or letter writing theme, showing these sorts of things in different parts of the world.

The key feature of the card, though, was that each one contained an authentic postage stamp from among countries around the world. The stamps were affixed right to the fronts of the cards. Many of the stamps appear to be canceled but they don’t always seem to be. Those stamps, by the way, weren’t necessarily representative of the picture on the front. For example, this one for the U.S. Pony Express features a stamp from Switzerland.

Of course, that had to be the case for the American cards. These, after all, were distributed in the U.S. and the backs of the cards advertised that each card contained a foreign stamp.

Quality control had to be an issue with these cards, too. The stamps would have been placed by hand, meaning some were no doubt, affixed crookedly and what not.

We know that stamp collecting was popular at the time period but it’s also worth mentioning that cards that focused on the mail were also kind of ‘a thing,’ as well. While we generally take the mail for granted (well, I mean, unless we’re waiting for cards to arrive, of course), the mail was a really big deal back at the time. People were, I imagine, quite fascinated by it, and it was one of the first ways people were able to connect with others in faraway places on a somewhat regular basis. 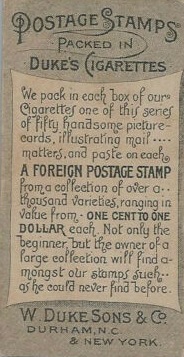 And, heck, mail was just more exciting back then. Instead of coming home to a stash consisting primarily of junk mail and bills, people sent actual, real-life, handwritten letters. If you had mail back then, chances are it was real mail from someone you knew. And given the fact that mail coaches and riders were sometimes robbed or even killed, that a letter even made it to its intended delivery spot was somewhat noteworthy.

I wrote about one of these mail card sets once — the Mail of All Nations sets, which, ironically, was a set you could receive by redeeming a set of baseball cards. Other types of early cards focusing on mail delivery existed, too.

One notable feature of many of these Duke Postage Stamp cards is that, as old-time collectors were wont to do, people made alterations to them. Specifically, these cards are often found with the stamps removed, leaving paper loss behind and, just as importantly, no actual stamp. As I mentioned, stamp collecting was quite popular and you can bet that many folks decided to remove the stamp and fill two collecting needs at once. Cards without the stamps, as you can imagine, are not as valuable as ones left intact.

Even intact ones are not highly valuable. The Pony Express card shown here is one of the more desirable cards in the set for American collectors. Even professionally graded examples in decent mid-grade condition, only sell in the $25-$50 range. Most low-grade cards from this set start around $5-$10.

I do suppose there are some that could possibly contain a rare stamp that might increase the value. But for the most part, these cards are relatively affordable given their age.