This 1930s UK tobacco card set includes the likes of George Washington and Mozart, with a twist 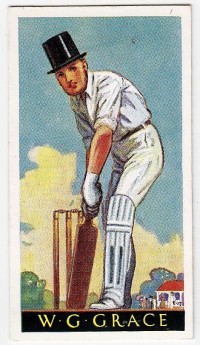 Godfrey Phillips was one of the popular tobacco companies out of the UK in the pre-war era. They issued numerous tobacco card sets that were found in their cigarette products and one of the more unique ones was their 1936 Famous Minors offering.

This set of 50 cards spotlighted the early years of some of the world’s most famous people. Now, if you’re solely a sports collector, this set will probably do little to intrigue you. The only real athletes in it are famed cricketer W.G. Grace and, to an even lesser degree, famous tightrope walker Charles Blondin. Blondin was so popular that he was known only by his last name.

Blondin, in fact, is the reason I stumbled upon this set at all. He has few cards and I picked his up along with the card of Grace, which led me to take a closer look at it. I didn’t find any other sports cards in it but it’s such a unique set that I’m still somewhat intrigued by it.

Aesthetically, the cards are basic and just have a very clean look. Color photos, emphasis on the name in an attractive black box, and a nice biography on the back. The simplicity of the design is a big reason I like this set.

Like several UK sets, backs of these cards actually have an adhesive so that, if wet, they would affix to something. Many of these types of sets had accompanying albums where the cards could be stored and my guess is that was the case here (though that is merely a guess due to the adhesive).

True to the name of the set, the biographies on the back talk more about the subject’s early years as opposed to the greatness they would go on to achieve. George Washington’s card, for example, talks about the fiction of his famous chopping down of a cherry tree and mentions that at the age of 16, he was actually a public surveyor before going into his militaristic rise. Grace’s card mentions that he became a cricketer at the age of 15. Blondin’s recounts his tightrope walking at the age of six and others follow in similar fashion.

The cards are your typical cigarette card size, measuring about 1 7/16″ wide and 2 5/8″ tall. With white borders, they are also printed on card stock that is slightly thinner than some traditional UK tobacco issues.

The checklist is a hodgepodge of famous people. You’ve got leaders, such as Washington, Alexander the Great, kings/queens, and Napoleon to famous artists/musicians such as Leonardo da Vinci, Mozart, Handel, and Michaelangelo. Others include subjects, such as Isaac Newton, Marco Polo, and Saint Patrick.

Price wise, this is an inexpensive set. Some of the bigger names like Washington or Grace can fetch asking prices of $10 or so. But in general, most of the cards here are a buck or two. And like many UK sets from the 1930s, you’re typically better off buying the entire set if you want more than just a few cards. Complete sets are generally in the $20-$25 range with lower-grade sets sometimes even cheaper.

Many 1930s UK tobacco sets do not have strong values and that is unfortunately the case here. These cards are not overly common but are not too hard to find, either.