There are all sorts of keys in the T206 set. Most of those are Hall of Famers, superstar players, and shortprints. But there are also some good finds to be had among the lower-priced cards.

Some of those are the cards with lower numbers on the population reports, that I outlined here. Here are a few others that are worth watching. There are many others that can be added to this list so perhaps a follow-up article will be warranted.

Ed Abbaticchio is not a household name by any means. Further, his nine-year career and career .254 batting average don’t jump out and make you believe his cards are great finds.

In addition to being a baseball player, he was also an early professional football player, suiting up in the late 1800s and early 1900s with the Latrobe Athletic association. His Wikipedia page mentions that he is credited with developing the spiral punt to allow the ball to go farther.

As an added bonus, Abbaticchio’s cards are the first ones in the unnumbered T206 set if you arrange the cards alphabetically. He is found on two cards and both are the price of commons.

Gavvy Cravath is another mostly unknown outside of pre-war collector circles. But make no mistake, he was a star player.

Cravath’s name may not be remembered too much today but he was one of the more feared power hitters of his time. He not only led the league in home runs but did it six times in a seven-year span. The first four times he did it, he actually led the entire major leagues in long balls.

But Cravath was more than a deadly power hitter. In 1913, his 179 total hits led the league. That year, he also led the league in runs batted in (128), slugging percentage (.568), OPS (.974), and total bases (298). That season nearly led him to the Most Valuable Player award as he finished second to Jake Daubert. During his career, he would lead the league in other categories as well, including runs and walks in 1915.

The good news is that his card won’t cost you more than the price of a common.

Harry Davis is another player who hasn’t really seen huge spikes in his cards. Still, he was an above average major leaguer, which led to a 22-year career.

As a young player in the late 1800s, he led the league with an amazing 28 triples and he was the back to back RBI champion in the American League in 1905 and 1906. And as if all of that wasn’t enough, he won two World Series titles with the Philadelphia Athletics.

Davis’ name carries some clout but his cards are still not hard to find at either common prices or slightly above those. He has two cards in the set and neither will cost you all that much.

When you think of early aces, most collectors would probably named Cy Young, Christy Mathewson, or Walter Johnson. But while George Mullin’s name isn’t usually mentioned in the same breath as those players, he was a very good pitcher in his own right.

He was also one of the stars of a Detroit Tigers team that went to three straight World Series in 1907, 1908, and 1909. The Tigers lost all three of those series’ but Mullin can hardly be blamed as he had a 1.86 postseason ERA in those contests, pitching six complete games in all six of his starts.

One of Mullin’s cards will cost you more than a common since it’s one of the six horizontal cards found in the set and those are a little pricier. But both of his cards are cheap and considered to be commons by most standards. 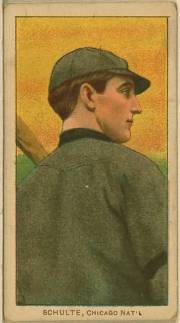 Wildfire Schulte is a player I’ve written about before. He isn’t a household name by any means but has a bit of a following in pre-war circles. Despite that, his cards are all relatively cheap by comparison.

Schulte’s greatest seasons were in 1910 and 1911. Those years, he led the league in home runs each time, also batting .300 in each season. His 1911 season, in particular, was when he really became known. That year, he led the league in round trippers, runs batted in, slugging percentage, and total bases. That was enough to win him the National League Most Valuable Player award.

Schulte has two cards in the set and neither will cost you very much in low-grade condition. His front facing card commands a bit more money but both are in the ballpark of a common.