In the Mail: One Crazy Week of Card Buying

The past week included some serious card buying

Typically, I haven’t written posts about many of my card purchases. I usually run a thread about them on Twitter but know that many of the site’s readers aren’t on that platform.

So I got the idea to write a little about some purchases here. Now, I’m not going to write about every single card I buy. But what I will do is when buying a large lot of cards, I’ll run through some of them and give a bit of commentary. And even if you do follow the Twitter threads on these purchases, you’ll get some value here because what I can write about there in terms of a word count is very limited.

Most of these larger purchases come via COMC. But I’ll be sprinkling in a few other cards if they came at the same time. With that said, here are the results of a COMC order as well as a few other odds and ends from the past few days. In all, it’s been a whirlwind of a week.

This year, I learned just how reasonable it was to collect the 1941 Play Ball set. By ‘reasonable,’ I mean it’s a relatively short set (72 cards) with no ultra expensive cards in low-grade.

I pieced together about half of the set over one weekend, buying cards from COMC and eBay. I took some time on the others but made it to 70 of the 72 cards in a few months.

What I didn’t expect was that the Ted Williams and Joe DiMaggio cards would be so difficult.

These aren’t cards that are hard to find, per se. But asking prices for them are generally high and since I was looking or low-grade cards, that makes it even harder because a lot of other collectors are looking for those cards, too.

I passed on a low-grade pair for around $400 or so earlier this year and that proved to be a mistake since, as I learned, it was an exceptional deal. Ironically, the collector that purchased those cards was in a collector group to which I belong. He offered this card up after upgrading it and I wasn’t going to miss out on it again.

There are the pencil markings on the front but the card has a clean back and is free of paper loss and creases. Now, I’m just looking for DiMaggio. 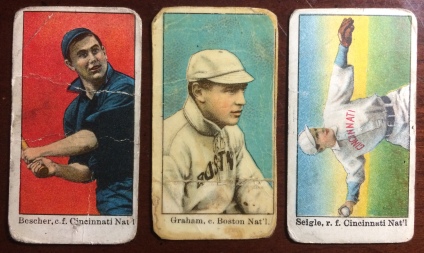 Speaking of filling sets, I made some good progress on another set I’ve focused on — the E90-1 American Caramel set.

The set is a tough one once you get past the halfway point. It has a ridiculous amount of tough shortprint cards and that scares a lot of collectors off.

I’m down to 25 cards left for that one and recently picked up these three. Now, these cards aren’t perfect. Both Bescher and Seigle have some markings on the back and the Graham is actually sealed in laminate. But they are all difficult finds and it was great to get all of them and fill the binder holes. I was even more thrilled as the Bescher and Seigle came as a result of a trade.

Finally, I also made some good progress on a third set, the 1911 T201 Mecca Double Folders.

I had no aspirations to collect this set but, earlier this year, I picked up the Ty Cobb/Sam Crawford card using eBay Bucks and negotiating with a seller. That’s the most expensive card in the set and, finding some cheaper commons, I figured I’d make a run at that one, too.

There are only 50 cards in it and, as I’ve written before, it’s probably the cheapest pre-war tobacco baseball-only set you can find. Decent Cobb/Crawford cards can be found for around $400-$500 and I’ve gotten plenty of low-grade commons for around $15. Picking up six here was a good find and I’m now more than halfway complete on this set.

You might recall that I recently wrote about working on too many sets. That number recently increased by two.

The 1915 Ogden’s Boxers set is one I had never really considered before. But finding a bunch of cards on COMC at only a few bucks a piece, I was hooked. And with only 50 cards in the set, it’s really manageable.

If you dabble in pre-war boxing cards, this layout might look familiar to you. Completely white background, the font, etc. However, it’s possible you’ve seen these cards but not necessarily in this set. That’s because Ogden’s produced a similar looking set in 1908 and 1909, using this same layout in their Pugilists and Wrestlers set. That release is well known and includes what many collectors consider to include the rookie card of Hall of Famer Jack Johnson. This set was issued in 1915 and is different from that one.

At any rate, my Ogden’s haul included a total of 27 cards giving me just more than half of the set. I hope to complete that one relatively soon.

I also began another set, which is sometimes seen as a continuation of an earlier one.

As mentioned above, I am working on the E90-1 American Caramel set. While that is the most popular of the E90 issues, American Caramel also released sets known now as E90-2 and E90-3. These are team sets — as I detailed here, E90-2 covered the 1909 World Series champion Pittsburgh Pirates while E90-3 included cards of Chicago Cubs and Chicago White Sox players.

I had been mostly content to stick with E90-1. The E90-2 and E90-3 cards are just sort of difficult to find and, as team issues, I was less interested in those. But that was before I saw a good deal on an E90-3 card of Hall of Famer Ed Walsh. A quick eBay purchase later of this one and an E90-2 card of Hall of Famer Fred Clarke and I’m officially collecting these sets.

Whether or not they are ever completed is up in the air. Honus Wagner is in E90-2 and, well, it’s not cheap, even in low-grade condition. But if I could put together the rest of the set, I’d be content with that. 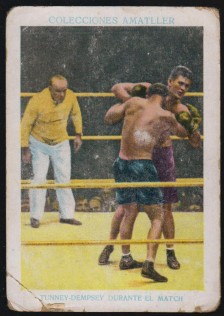 I’m always on the looking for some rare stuff out there. This stuff is not always expensive and fortunately, I found some really tough singles as well.

One was this 1928 Amatller Chocolates card of Hall of Fame boxers Jack Dempsey and Gene Tunney.

Amatller produced several sets and, while I had a tennis card in their tennis set, I did not previously have a boxing one. I found this one shown here on COMC at a good price and had to have it.

Amatller cards are pretty tough to find here in the states. PSA, for example, has only graded 15 total of this card.

Also shown here is a card of an American soldier that I was not previously aware of from a rare international set called Flags and Flags with Soldiers. I’ll have more on this card in a separate post a little later but it’s the key card for American collectors in a very tough non-sports tobacco set. Once I looked into the rarity of it, finding a card like this on COMC was, needless to say, a bit of a surprise. 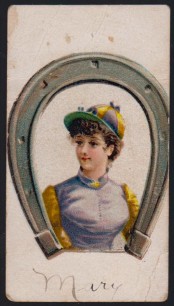 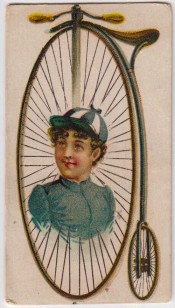 Also in the rarity category were these N228-5 Kinney Brothers cards.

Kinney issued six types of 19th century cards that all fall under the N228 header. This type here is under the fifth subset and these are small rectangular cards.

The unique thing about these cards is that a small advertisement on the back encouraged collectors to cut out the pictures. That has increased their rarity and finding them in uncut condition is not easy.

The baseball card is the key to the set. However, a few other minor sports are featured, including cycling and horse racing with a jockey. I found these cards and nearly hurt myself buying them only because I know they are not easy to find.

Too Good to Pass Up 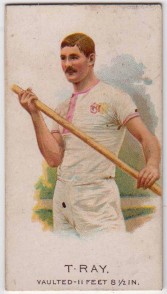 And while I didn’t list him in this article, Lewis is definitely one of those tougher Recruit-backed cards in the set. Even in low-grade shape, you can find dealers asking $50-$75 for his card on a pretty regular basis. They don’t always sell for that much but it can be a very hard card to find.

Currently, eBay has two low-grade ones for sale with asking prices topping $200. That’s too much but, you get the point. To date, PSA has graded only about 40 of them.

Ditto for this N29 Allen & Ginter card of pole vaulter T. Ray. While any Allen & Ginter’s Champions cards are somewhat rare, the N29s are much rarer than the N28 set. I am working on both the N28 and N29 sets and even though I had this one, it was still a good buy for the price.

I also grabbed a few other unique cards. One of those was this Joe Louis card from the 1930s Ardath Photocards set.

Despite the name, these are standard card size and feature all kinds of subjects. The card was issued shortly after Louis had won the heavyweight title and is one of his earlier cards.

Another unique card was this early card of cricketer Jack Hobbs. Now, I don’t collect much cricket but I do buy Hobbs cards, in addition to W.G. Grace and Don Bradman cards, when I find them cheap enough as they regarded as some of the greatest players of all time.

To top it off, this card of Hobbs here is notable for a couple of reasons. First, it comes from a cricket set issued by the publication Young Britain in 1922. The cards are somewhat rare in the U.S. and, even more importantly, most were cut apart. Each card includes two players but they were often cut to separate the individual cards. Uncut ones like this are a bit harder to find and it was a Hobbs card I did not have previously. This one also includes another star player in Percy Fender.

In addition to these cards I picked up a tons of odds and ends that I’m not going to bore you with here. Goudeys, T218 Champions cards, etc. Lots of stuff that isn’t too consequential. But this was one big week of buying cards.