Behind the Lens: A Close-Up Look at T205 Cards

Aside from collecting cards, my other favorite hobby is photography. I am quick to add that I’m no professional but I do enjoy taking pictures and experimenting plenty. About five years ago, I got a little more serious and bought my first SLR camera. I’ve since upgraded it and one thing I’ve gotten a bit more into is macro photography, getting real up-close shots of small subjects. The fact that I can do much of that in the house without having to leave during the cold winter days is a bonus.

I thought it would be great to try to marry these two hobbies in some way and, instead of merely photographing sports cards, I wanted to focus on something a little different –macrophotography of them. Seeing some of these cards up close reveals some very cool things and I’ll be doing these kinds of articles from time to time to give you an idea of what a card looks like up close. They won’t really focus on the printing aspect of the cards since that’s not an area of expertise for me. But they will hopefully allow you to see some of these cards in a different light.

If you’re a photographer and wondering about the equipment, I’m using a Canon 80D DSLR camera with a Laowa 25mm macro lens. Most of the shots here are taken at 2.5x magnification but the lens actually goes up to 5.0x.

Red Kleinow was a catcher in the early 1900s. He had a mostly insignificant career as a player, hitting .213 in eight seasons. But he’s found in several sets because he was around during the ‘boom’ of 20th century tobacco cards.

One of those sets he is in is the T205 set. I didn’t choose his specific card for any great reason. It just happens to be one of the cleaner T205 cards I happen to have (with a slight trim), which made capturing the printing on it a bit easier.

T205 cards, if you’re unfamiliar with them, make up one of the landmark sets of the pre-war era. They included excellent lithography but were one of the first sets to include both statistics and biographies of the players. They have distinctive gold borders and are often called the ‘T205 Gold Border’ set because of that. Today, these cards are considered to be among the most famous of all pre-war sets. 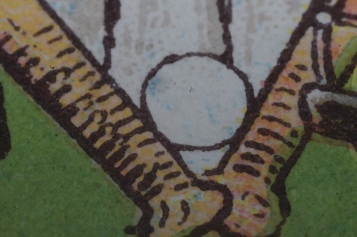 First things first, you’ll notice the equipment found on this particular card at the bottom.

Players from the National League had only a large blowup of the player’s head but American League cards, like Kleinow’s, had baseball diamond and equipment. Here’s a close up shot of the handles on the bats and the ball. While they look pretty nice on a card without seeing the magnification, blowing the image up allows us to see just how crude the artwork for the equipment is. The ball is far from a perfect circle, for example, and the wood grain work on the bats is, well, less than detailed.

Next, let’s take a look at the catcher’s mask.

The mask on Kleinow’s card makes sense because he was a catcher. But the mask appears on cards of even the non-catchers and that looks a bit more out of place.

In any event, you’ll notice some blue lines over the faceplate areas. Those are probably intended to be pushed further to the right as they don’t quite line up with the rest of the image.

This slight color shift is seen quite commonly on pre-war cards. But it’s notable here because unless you’re looking at the picture without magnification, you don’t really see it out of alignment. Technically, that should probably be considered a minor printing flaw but when graders look at something like this, I’m not sure it would even be counted since these kinds of issues were so prevalent on the older cards. It’s just so minuscule and while larger print errors are taken into consideration, I’m guessing this would fall under the tolerance limits of not being a flaw from a grading standpoint. 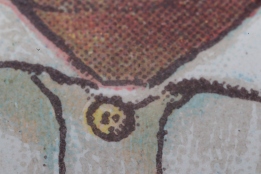 Next, I’ve got a close up of Kleinow’s head (left) area/hat as well as his neck/collar. Here, I really just wanted to show a bit more of his skin with the shadowing effect. You can see the print dots here in those shaded areas in particular a bit more than you can elsewhere because they’re darker to create the shading.

And if you look closely at the hat (picture on the left), you see that blue line again that we saw on the mask, just a bit out of alignment. We also get our first look at the gold of the playing diamond in that picture. So while we’re on that topic, let’s take a closer look at the gold borders. 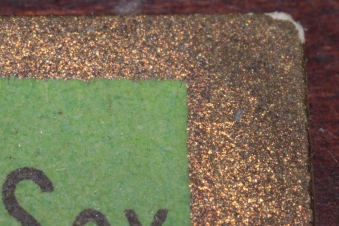 Here’s a close look at the upper right corner of the card with the gold border. The first thing you notice is that it’s the same gold that was used to create the line in the baseball diamond. That’s something I hadn’t really paid much attention to before, though, when you go back and look at the card as a whole, you can see it’s clearly the same.

The distinguishing characteristic is that you get a shimmering effect. That’s kind of important because without the magnification, you don’t really notice that on most T205 cards. But up close, it’s almost like a gold dust effect. At least that’s what it looks like even though the borders aren’t really made up of real sparkles or anything like that, obviously.

Finally, just to cover everything, let’s take a quick look at the backs. 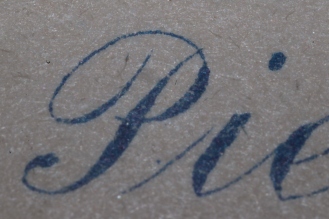 Nothing too off the wall here. And I’m not going to cover this as extensively because there are no real graphics here — only text.

But we’ve of course got blue ink for this card in particular since it is a Piedmont-branded card and that was their color. Here’s a piece of the Piedmont logo and the full text on the back matches this color of ink. That undoubtedly saved on printing costs as only one ink color on the back was needed. But other backs are different colors to match the color of the sponsor logo (Sweet Caporal cards have red or black ink, Sovereign cards have green ink, etc.).

And while this image isn’t the greatest, you can also see some of the fibers that make up the cardboard.

I sort of eased my way in with this article since this was the first one. Hopefully future ones will be a bit more in-depth.