A while back, I wrote about one of the latest pre-war non-sports releases, the 1940 Gum, Inc. Superman set. This time, I’ve got a review on one of the earliest in the N2 Allen & Ginter American Indian Chiefs sets.

Now, if you’re a baseball guy/gal, the site will definitely continue with a primarily sports card feel. Don’t worry — you won’t start seeing reviews on Garbage Pail Kids, Beatles cards, and whatnot. But I’ve gotten enough input out there from others that I know there’s an interest in at least some of the non-sports stuff and I want to look at some of the more popular pre-war non-sports cards.

The N2 American Indian Chiefs set is typically dated to 1888 and it was distributed by Allen & Ginter inside their cigarette packages. It came right around the time that a whole host of other cigarette cards were being issued.

Sports collectors hear the Allen & Ginter name and almost always think of their famous N28 and N29 Champions cards of athletes. But they produced all sorts of non-sports sets, too, and this is undoubtedly one of their most famous. In non-sports circles, it is heavily collected.

While these cards are very popular now (and must have been popular enough to produce at the time, of course), I always wonder what the sentiment surrounding them was like, given that Native Americans were not always looked at with great regard in those times. Some, no doubt fell in love with these cards and treasured them. Others, I’m sure, looked at them with great derision.

In all, the set has a total of 50 cards making it manageable for set collectors given some patience. And, as its name indicates, it includes popular Native American Chiefs such as Sitting Bull and Geronimo.

Looking at the cards, it becomes very easy for anyone familiar with Allen & Ginter to tell that this is one of their sets. There are the all white backgrounds, the same incredible artwork on others, and the same layout that is found on the Champions cards. And like some other Allen & Ginter sets, there’s a checklist on the backs of them.

Similar to what Allen & Ginter did with creating oversized variations (now known as N43) their N29 cards, they also produced a large version of these cards as well, using the same portraits on a larger card with additional artwork. That set is known as N36 today and, like the N43 cards in comparison with N29, are more valuable than these smaller N2 cards. 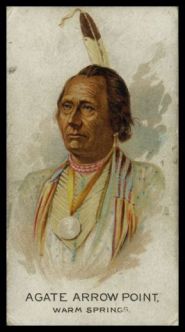 Those errors, in case you are wondering, are much tougher to find than the corrected cards, leading us to believe they were caught early in the printing process.

For example, here are the current PSA populations of the error cards vs. the corrected ones.

The Chief Gall error card technically seems to be the rarest based on these pops but it’s very close and all are incredibly difficult. The numbers are close enough that the differences could just be attributed to collectors with those card more or less inclined to submit them for grading based on condition, etc. In short, all are really tough to find.

The cards are striking enough that they are collected even by folks that don’t typically pursue non-sports cards. That has not yet led to outrageous prices but you won’t generally find these cards in dollar boxes, either.

Even low-grade ones are difficult to find much under $10, placing them near the level of some baseball sets, like T206. They don’t sell for quite as much but are close. They’re not all that cheap, either. Geronimo, for example, usually starts somewhere around $100-$150.

Here’s a full checklist of the set (not including the aforementioned errors listed above).