The Stats version of Gray’s card is a hot commodity

Recently, I wrote about a proposed ‘Big Four’ for the T205 gold border set. Those cards are some of the most expensive in the release and while I did not list Dolly Gray’s ‘Stats’ card, it is certainly one of the more desirable errors in the set.

Gray’s major league baseball career was not notable but in the minor leagues, he looked quite promising. He won 20 games in his first three years, capped by a 27-16 record with a 2.15 ERA in the famed Pacific Coast League. In 1907 and 1908, though, he really stood out, going a combined 58-25 in the league. That was enough to earn him a shot in the majors. 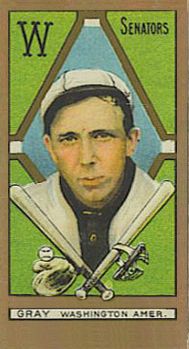 Gray’s incredibly bad 15-51 career record is not entirely his fault. He was stuck with the Washington Senators who were, at the time, one of the worst teams in the majors, despite having one of the greatest pitchers of all time in Walter Johnson. Johnson himself only managed a 13-25 record in 1909, Gray’s first year, despite the fact that his ERA was a low 2.22. But even by his team’s low standards, Gray floundered. In two of those three years, he won the fewest amount of games on the staff (the exception, surprisingly, was his rookie year when he won only five games but still had the third most victories on the team).

At any rate, those stats are notable for this discussion. See, the T205 cards were one of the first sets to include both statistics and a biography of a player, making them closer to what modern baseball cards looked like. Sure, the tobacco cards were still tiny by today’s standards and were devoid of things like real images and glossy finishes. But most cards at that time had either advertisements on the back, were blank, or perhaps had some cursory information or a checklist. What T205 did was just different.

The backs of cards were supposed to have statistics but, for some reason, no stats were affixed to most of Gray’s cards. Stats were added on a few of the cards, however, and those are the rare ones. Shown here on the left is the non-stats card and the card on the right has Gray’s 1910 statistics. Well, at least they are supposed to be his. 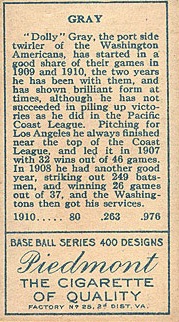 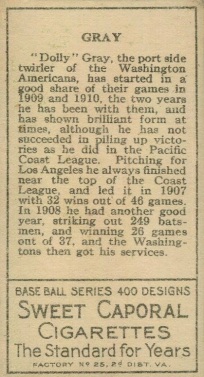 The interesting thing here is that the stats do not match Gray’s actual numbers. Pitchers’ cards showed a player’s wins and losses, along with a winning percentage, and this one doesn’t do that. If you’ve seen any number of T205 cards, the mistake sticks out like a sore thumb. The numbers shown here are in the format for a position player — those included a player’s number of games, batting average, and fielding percentage. Ironically, the .263 shown here for a player’s batting average actually matches Gray’s ERA for 1910.

I knew the stats were incorrect. But this Net54 post actually identifies the player who the stats belong to — Ed Phelps, a St. Louis Cardinals player. I’ve always believed the stats were added as a correction, but merely the wrong ones. But that post theorizes the reverse could have happened — the stats were first printed before it was discovered they were the incorrect ones, and simply covered up or removed later.

Whichever is true, we know that the Stats version of the card is much rarer than the No Stats version. As a result, it’s more expensive, too. Low-grade copies of Gray’s cards without the stats aren’t quite commons. The prestige of the Stats version has probably helped it in that regard and the card, even in low-grade, still usually starts around $25 or so. But low-grade Stats cards usually start closer to $300-$350.

PSA population reports give us an idea of the rarity. To date, about 130 of the No Stats version has been graded but only about half that many Stats cards have been graded. The actual ratio is certainly even greater than that 2:1 would suggest simply because collectors are more likely to have the rarer, more expensive Stats card graded than they would the No Stats version.

More than 100 years later, the Gray stats card remains one of the key errors found in the T205 set. 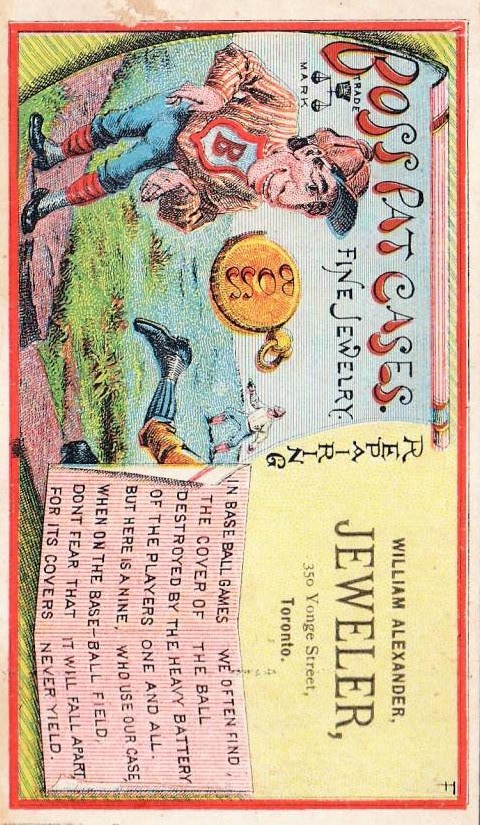