Bill Dahlen has two cards in the T206 set, though both used the same pose. Dahlen’s variations are due to a team change during production.

One of Dahlen’s cards pictures him with Boston while the second shows him with Brooklyn. Dahlen played in 1908 and 1909 with the Boston Doves before joining the Brooklyn Superbas in 1910, becoming their manager. He would remain in Brooklyn through 1913.

Dahlen is not in the Baseball Hall of Fame but he often leads the discussion of pre-war players that many feel should be in. His career statistics are not overwhelming by today’s standards but he was seen as a very good player and one that has often gone underappreciated. Some collectors believe that he will ultimately be inducted.

With the T206 cards being printed from 1909-11, Dahlen one might expect his earlier 1909 cards to be the more difficult ones. After all, he was in Boston for only the 1909 print run and would have seemingly had more overall cards printed in 1910 and 1911. But that isn’t the case. Dahlen was with Brooklyn for a longer period of time during the print run but he has fewer Brooklyn cards. 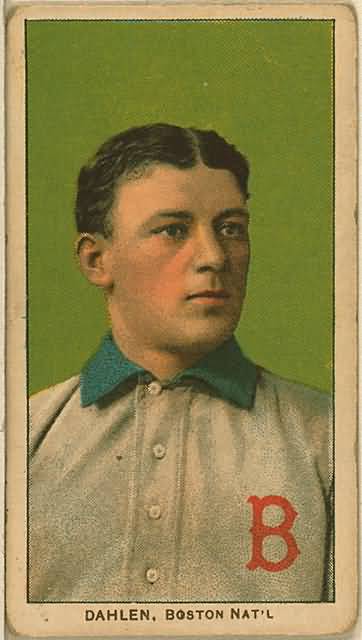 The two cards, if you’ve never seen them, are virtually the same. The primary difference is, in addition to Boston and Brooklyn names at the bottom, the color of the ‘B’ insignia on his jersey. Boston cards have a red ‘B’ while Brooklyn’s ‘B’ is blue.

The PSA population reports sort of backs that aforementioned point about rarity up. To date, they’ve graded about 400 of Dahlen’s Boston cards and only 300 of his Brooklyn cards. Also, consider that the Brooklyn card would also be graded at a higher rate because it’s more valuable.

However, the disparity of those in existence may also not be quite as great as some believe. And, certainly, neither card is exceptionally rare.

For example, in looking at the Dahlen cards available on eBay, there are actually more Brooklyn cards for sale than there are Boston ones. Part of that is likely due to the fact that the Brooklyn card is more expensive and thus, sellers are interested in moving it more frequently. And truthfully, even that’s a bit deceptive, since many more Boston cards of Dahlen have sold there recently than his Brooklyn ones have. But the current listings showing more Brooklyn cards available are still a bit of an eye opener when trying to gauge the rarity.

In any event, while the precise degree of rarity between the two cards may be up in the air, what we do know is that the Brooklyn cards are undoubtedly more expensive.

Dahlen’s Brooklyn cards are not in the Big Four or on the same level of the next two rarities, the St. Louis versions of the Bill O’Hara and Ray Demmitt cards. But, they are up there along with things like the Elberfeld Washington portrait, another card issued due to a team change.

Today, low-grade Boston cards of Dahlen start around $100-$150 while his Brooklyn cards start around double that price.

All of Dahlen’s T206 cards sell above the common player level as he is widely collected. But his Brooklyn variation is the one that’s the more significant of the two.