Unlike the star-studded N28 Allen & Ginter set, the baseball players in the follow-up N29 set leave a lot to be desired

The N28 Allen & Ginter set consisted of 50 cards from a variety of sports. The highlights are the ten baseball players, which are generally the most expensive ones.

That short list of baseball players in that set included legendary names, such as Cap Anson, King Kelly, and others. Six of the ten (the others are John Ward, Tim Keefe, Charles Comiskey, and John Clarkson) are Hall of Famers. 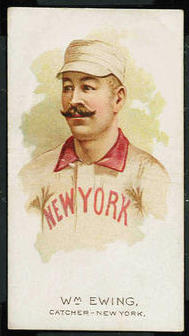 Allen & Ginter offered a second series to the set the following year (believed to be in 1889) known today as N29. But the six baseball players in it left much to be desired.

As expected, Ewing’s card doesn’t come cheap for a couple of reasons. First because of his stature as a Hall of Famer and, second, because the N29 cards are much rarer than the N28s. While most of the N28 baseball players have been graded more than 150 times by PSA, Ewing has only about half that amount graded. Even in low-grade condition, his card is hard to find for much less than $500-$600.

The others in the N29 set, safe to say, don’t have his name recognition.

One of those players is John Morrill. Morrill wasn’t even noteworthy enough to have his name spelled correctly as he’s called ‘Morrell.’ The set is called ‘Champions’ but it’s hard to see where he fits in. He lasted 15 years in the majors but was a modest player with only a .260 career batting average. He also was often among the league’s leaders in strikeouts and whiffed a major league-leading 86 times in 1887.

Then there’s George ‘Doggie’ Miller. Miller himself lasted 13 years in the majors. But, like Morrill, he was a modest player, owner of a .267 batting average. And Jim Fogarty, he of the .246 career batting average and seven-year career was an even less impressive player.

Now, the other two players in the set did have better careers. Neither was really a star, though.

Pitcher Pretzels Getzien (or Getzein as accounts spell it both ways), for example, won 59 games over a two-year period. And his .690 winning percentage in the second of those seasons, 1887, led the league. But twice (including that season), he gave up the most home runs in the majors. And his 145-139 career record with a 3.46 ERA confirms his mediocrity.

Arguably the second-best player in the set is Jimmy Ryan. Ryan played mostly with Chicago in the National League and lasted 18 seasons. He was a career .308 hitter, and in 1888, led the league in both hits (182) and home runs (16). Interestingly, he topped those numbers in 1889 (187 hits and 17 home runs) but neither of those were good enough to lead the league.

Ryan had a good career and hit well. But he isn’t considered a major star and, today, his cards don’t really sell for much more than the others.

All of the non-Ewing cards typically start around $100-$150 in low-grade condition. Considering the star power in the preceding N28 set, Allen & Ginter’s N29 set was lacking.

Now, before you go blaming Allen & Ginter, consider that they sort of had their hands tied a bit. That’s because the N29 set didn’t repeat players like other sets did.

We sort of see this same issue in the W512 and W513 strip cards, too. The multi-sport 1925-27 W512 set loaded up on all of the big baseball stars, like Babe Ruth, Ty Cobb, Tris Speaker, and others. The ensuing 1928 W513 set, meanwhile, settled for far lesser names as all new players were used.

Still, it’s hard to imagine some more well known players couldn’t have been found. And at the end of the day, the N29 set just falls a bit short.