Here’s the rundown on the famous Roy Hobbs baseball cards from the iconic movie, The Natural

Simply put, The Natural is one of the most famous baseball movies ever made. The 1984 film features the mythical Roy Hobbs played by Robert Redford as he seeks to turn around a struggling team. Some of Hobbs’ character is based on real major leaguer Eddie Waitkus.

But while the movie is great, card collectors have repeatedly been drawn to a scene in it that features real life baseball cards.

The cards have a 1940 Play Ball design and feature Hobbs on the front. The scene in the movie shows them being printed right on a press and they are among the cooler baseball cards ever depicted in a movie.

While the cards are known by collectors today, hardly any could tell you any details about them other than what they look like. And since a bevy of varying reprints have been made of them, that has contributed to the confusion.

But how did they come to be? What’s the backstory? I recently reached out to Andrew Aronstein, son of one of the founders of TCMA, Michael Aronstein. TCMA, famous for creating numerous original and minor league sets, was actually the designer of the Hobbs cards. 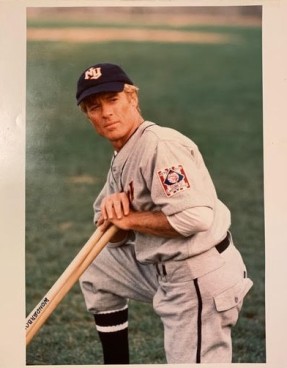 If you’re unfamiliar with them, TCMA was a famous producer of baseball cards. “TCMA got its start in the 1960s when my dad, who was a collector, developed a card set illustrated by his uncle Myron and aunt Margie under the name Sports Cards for Collectors (SCFC),” Andrew explains. “Shortly afterward, he partnered with another prominent collector by the name of Tom Collier and they incorporated in 1972.”

The initials of Tom Collier and Michael Aronstein give us the TCMA name.

“Their very first product consisted of two 8 1/2″ x 11″ reprint sheets featuring pre-war cards from their own collections,” Andrew says. “Known as Sample Sheet 1 and Sample Sheet 2, these sheets became very popular and, in 1975, were cataloged as RP-1 and RP-2 in Bert Sugar and Keith Olbermann’s book, “The Sports Collectors Bible.”

TCMA grew in popularity in the early 1980s and it was then that the company’s growth led to a pretty significant break.

“Sometime in late 1983 or early 1984, the production company for The Natural contacted TCMA inquiring about cards from the era in which the film took place,” Andrew recounts. “As it turned out, while The Natural was in production, TCMA was just starting their run to continue where 1939-1941 Play Ball left off. From 1983-1985 TCMA created 45 card sets for Play Ball years 1942-1949, utilizing a very similar border design as well as original George Burke photos in many cases, just as the original Play Ball cards did.”

One thing led to another and a deal was struck for TCMA to design the cards. Mark Johnson, the producer of the movie, reached out to the company and sent a photograph of Robert Redford as Hobbs. This photo was then used to produce various alternative crops, which were pasted on top of existing TCMA Play-Ball cards to create Roy Hobbs mockup designs.

One thing that has puzzled collectors is that, while the cards have a 1940 design, they are actually printed in color. That has led some collectors to believe that the makers of the cards did not know what they were doing. Instead, it was something out of TCMA’s control. “It was specifically requested by Johnson that the cards be created in color, despite the historical inaccuracy” Andrew says.

Another misconception is that TCMA or their printer actually printed these cards. However, that does not appear the be the case. “From what I understand,” Andrew says, “the cards were actually printed by a prop house in California, not by the printer TCMA used here in New York.”

The first two cards from left are mockup designs, using the photos pasted on top of existing TCMA Play Ball cards. The last card on the right is an actual finished Hobbs card with the blank back.

While collectors are familiar with these cards, what hardly anyone knows is that a card with elements from the 1941 Play Ball set was considered. The cards did not have a 1941 Play Ball design, per se. But it is clear that somewhere along the line, someone helping to design the cards found a 1941 Play Ball card of some dude named Gunboat.

Like the 1940 Play Ball cards, these proposed cards had at least two different crops that were considered. The major difference between these cards and the others is that these were art cards with a depiction of Hobbs as opposed to a real photo of him. They had a 1941 Play Ball ‘feel’ inside of the 1940 Play Ball frame. But the cards have a remarkably different look than the Play Ball cards ultimately chosen.

Here are two of these other types of card designs courtesy of Andrew.

So why can we say these cards had a 1941 Play Ball feel? And what’s this about some guy named Gunboat? An earlier iteration of this article mentioned they had a Diamond Stars-like feel to them. That is certainly true based on the design but we can actually tie them much closer to the 1941 Play Ball set because of a discovery I stumbled upon. 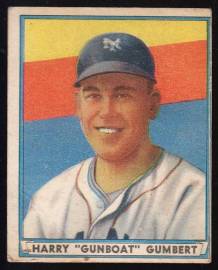 As I was digging through my cards, I found a 1941 Play Ball card of Harry ‘Gunboat’ Gumbert. The card stood out immediately as I found it shortly after Andrew shared these designs above with me.

Gumbert is a relatively inconsequential player. He played 15 years in the majors and, with 143 career wins, was certainly a decent pitcher. But his cards are generally commons and not much thought is given to them.

I recognized the color background and, after comparing it with the Hobbs cards, it’s clear that it’s the same one used for those mockups. As a result, Gumbert’s card has a very small connection to Hobbs and the movie as it was used to help design a prototype Hobbs design.

The distribution of these cards is not entirely known. They may not have been distributed to the general public but some may have been passed out at the film’s premiere.

Andrew has only a single card but says other authentic ones are out there. And he gives some clues to finding the real deal.

“Real ones will have a blank bank and a nice clear image,” he says. Cards with the standard design of regular 1940 Play Ball cards are not authentic and, of course, black and white ones will also not be real.