I love the E90-1 American Caramel set for all sorts of reasons. But, as I wrote for Sports Collectors Daily, one of the more unique aspects are all of the colorful sunset cards in the issue.

Depending on how you define the term ‘sunset’, there are anywhere between 25-35 of these cards in the set. Some of the sunsets are more artistic than others but, with about 120 cards in the entire set, cards with a sunset on them make up quite a bit.

Sure, you can lump them altogether. But, really, there are a few different types of them. 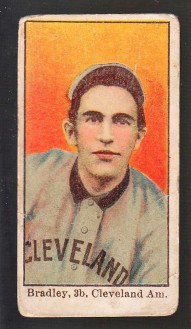 These are the cards that have a bit of a sunset on them. Some of the portraits might not be considered sunset cards but they clearly are, in my opinion.

The key thing here is that these are cards with a background of two colors with one sort of fading off into the other. Here’s one, for example, of Bill Bradley.

Bradley is one of the commons in the set and some would not consider this to be a sunset. But it’s a yellow-orange sky behind him and, for that reason, I sort of lump this in with the rest of the sunsets.

The reason I count cards like Bradley’s is because a card like Roger Bresnahan’s has a clear sunset, which uses these same colors. His just looks more like a sunset because it’s a full-body card showing a horizon.

The set includes all sorts of sunsets like these, which are a bit more mellow. 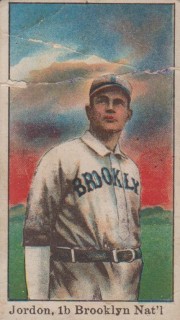 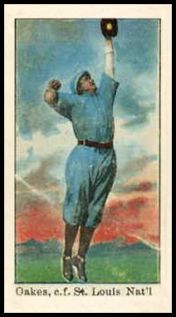 A second type of sunset found on the cards are ones a bit more dramatic. These include more than two colors and are very artistic in nature, even if looking a bit unrealistic.

These can include a complex mixture of colors and when discussing the sunset cards in the set, these are the ones more commonly thought of by collectors. Many of these have a storm-like appearance to them.

Frankly, I love these cards. I can’t get enough of them and an entire set of them would look great. Like I said, these aren’t sunset combinations you’re likely to see every day but they look incredible on a baseball card.

Of these, the two featuring Rebel Oakes and Buck Jordan are probably my favorites. Both have some great imagery and the Oakes, in particular, is just a fantastic picture. 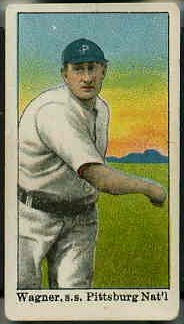 Along the lines of the second type here, another similar type of sunset card exists.

These sunsets are also fairly elaborate but have less bold colors. Instead, they use a ‘blander’ color combination with quieter colors.

Here are a couple of those to sort of explain what I mean. Cards of Honus Wagner and Harry Lumley also have sunsets but they aren’t nearly as loud or dramatic as the earlier ones that utilized reds and purples. The best separator between these and the last type is that these have the appearance of a sunny day.

These are just as cool, in my mind, but they are definitely different and should be in their own separate class. 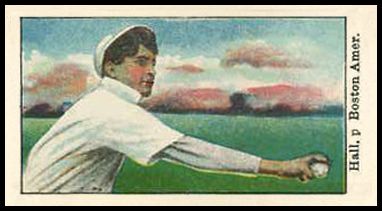 What exactly is a drab sunset? I’m not sure that such a thing exists in real life. But in terms of these cards, these are ones that don’t really fit in any of the two types directly above.

A few cards fit into this category. These sunsets exhibit pink, light purple, and more pale colors. They all generally have the same sort of theme, making you wonder if the artist was the same.

One of those is the Charley Hall card shown here.

If you really want sufficiently break this down, there are a few cards that belong here but don’t really have a home in these other categories.

One of those is the outstanding card of George Bell. And, no, I’m not talking about George Bell of 1980s Blue Jays fame.

The Bell sunset card is one of my favorites. It’s actually the card pictured at the top of my article.

Problem is, I don’t know in which category above it would belong to. It has an overwhelming pink color to it as well as a good mixture of yellow, but it’s not sufficiently drab enough to go into the category directly above.

There are a few others like this and if we’re being overly inclusive here, a separate ‘other’ category is probably needed to group a few that don’t seem to fit elsewhere.

King of the Sunsets

No article about sunset cards found in the E90-1 American Caramel set would be complete without mentioning the most important one. That’s the sunset variation of Dots Miller.

I wrote more about this unique card here, if you’re unfamiliar with it. This variation stands apart from the others in that most of Miller’s cards actually don’t have a sunset sky. But while most have only a plain yellow background, some have a red sunset element to match his cards found in other sets. Because those other Miller cards have the sunset, the plain yellow card should probably be considered an error. But however you look at them, the sunset card is the one that’s far more valuable and much tougher to find.