When Your Favorite Card Isn’t Necessarily Your Most Expensive One

What’s the prized possession in your sports card collection?

On Monday, I posed a question on Twitter about collectors’ most important cards. Specifically, I phrased it as such:

You must get rid of all of your baseball (or any sports) cards but are allowed to keep one. Which one are you keeping?

I enjoyed seeing and reading the responses, which were quite varied. There were some pre-war cards and some modern ones. Expensive cards and less expensive ones.

In asking the question to the Twittersphere, I also asked myself. I’ve got a folder of ‘favorites’ of some of my favorite cards scanned in and quickly headed there.

I’ve accumulated so many favorites over time that I think it would change if asked the question on a different day. But I ultimately settled on a card I’ve mentioned quite a bit on this site and on Twitter — my N557 Little Rhody America Baseball card graded an SGC 2.5.

You might notice the picture as its one found off to the side of this site. And I also recently wrote about it here. I’ve had a couple of them over the years and it doesn’t gets old when I see one, which isn’t often because of its rarity. But even though it doesn’t feature a real player, it’s just such a perfect card that embodies the spirit of 19th century baseball when the sport was finally starting to gain traction. The all black back of the card is also a thing of beauty.

If I’m picking one card, it’s probably that one. But a close second might be my Boss Pat Cases trade card shown here, another 19th century baseball card. 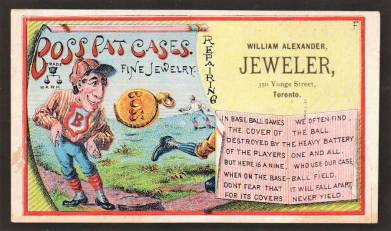 I’ve got a few of these, including one that is in better shape than one I’ve ever come across – an SGC graded 5. (This is one of my lower grade ones just because my graded card doesn’t show up well in a scan).

The card is a trade card for a company that made high end watches/covers. The scene is a very old baseball scene with players wearing the bib style of uniforms. This card isn’t quite as tough to find as the Little Rhody series but is not one you see every day in your local card shop.

Neither card is my most valuable one but if I were forced to give up all but one of my cards, it would probably be one of these two. Part of the reason I like them so much is the artwork. But another part of it is that they took me quite a while to hunt down – in the case of the Boss Pat Cases card, in the condition I wanted. Some collectors would surely pick their most expensive card as their favorite but I also expect there are some like me that have less valuable cards that are the ones hardest to part with.

Sure, I keep track of what cards are worth and, as I wrote recently, almost all of us are investors to some degree, whether we think we are or not. But at the core, I collect cards because I enjoy them. And the cards I enjoy the most aren’t my most valuable ones.