Two Types of 1878 Huntley and Palmers Biscuit Cards are Known 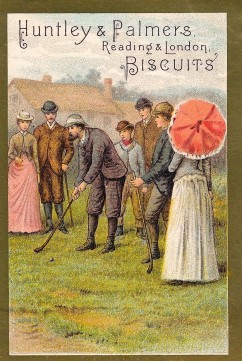 They can be dated to 1878 by the advertisement of the 1878 Exposition Universelle (World’s Fair) in Paris.

The type I would argue is the more common has a full bleed picture inside of a gold border. The second type is seen less frequently and has a semi-circle cropped picture with a white top. Both have a similar layout as the Huntley and Palmers name appears in the same font with a mention of their Reading and London locations. Both also have the same gold border and the same advertisement (or very close to it). But the difference in pictures and subjects is what makes them different. 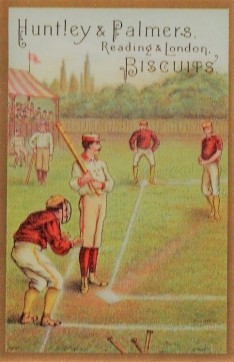 Most collectors are drawn to the full bleed type. Why? Well, that set has more common sports, including baseball, golf, and tennis. The baseball card, in particular, is one of the older such cards that you will find as most trade and tobacco issues did not come until the 1880s. Despite having generic subjects, those cards are quite desirable. In decent condition, the baseball card can easily sell for more than $100. Higher grade golf cards can, too. I’ve seen some references by sellers saying this is the first golf card.

The second type with the semi-circle is less desirable. It is a sports set but many are of the minor sports variety. There is a tennis card in it, but little else of great importance for most American collectors. The cricket card in it draws interest outside of the U.S., but with cards of bird hunting, yachting, and fishing, it falls short of the other set. A few sports, such as cricket and tennis, are repeated in both sets with different pictures.

The two checklists can be seen here. 12 cards appear to be in each set but I have found some that I did not know existed before in recent years so I’m not even 100% sure those checklists are complete. My checklists assembled here are the most complete ones I have seen to date for these sets.