I’ve told the story to others countless times but my collecting of baseball cards began with my grandmother, who once bought me a 1986 Topps rack pack. While I knew that I liked cards, I simply didn’t know much other than the fact that they were pictures of baseball players and had statistics on the backs most of the time. That was basically the extent of their complication to me.

But I was fortunate enough to have grandparents and parents who encouraged my interest in the hobby, even if they didn’t collect themselves. They routinely bought me cards and my parents, especially, drove me to card shows and shops.

Recently, I stumbled upon a book that I had completely forgotten about. But thumbing through the pages, I instantly remembered its origins and how I enjoyed it as a child.

The book is called, “The Complete Book of Collectible Baseball Cards,” and it was published in or around 1986. While the name meant nothing to me at the time, it was actually authored by Bob Lemke, who would lead the way on all sorts of other books for baseball cards through some really incredible research. My grandfather bought it for me but I can’t recall the occasion. But I remember him giving it to me and being pretty excited at the time. These were pre-internet days, after all, and there just wasn’t this kind of information accessible to collectors outside of books or other publications. This was the first real baseball card book that I can remember owning.

The book is a red hardcover book, though I seem to remember it originally having a cover. I always viewed as more encyclopedic in nature and it’s similar to the Standard Catalog publications that Lemke was involved with. It was a pseudo price guide but only very unofficially since it was a book and not a regularly updated magazine like Beckett or Tuff Stuff would ultimately produce. 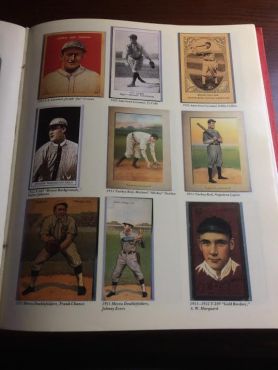 But in addition to the prices, it’s kind of interesting in that it makes some predictions about the future collectibility of sets. It even breaks down positives and negatives of most sets. Some stances, such as the 1986 Topps set featuring ‘an innovative design,’ are kind of funny in retrospect. But that also makes the book more interesting than your standard price guide.

Most of my time was spent in the beginning of the book because that is where the newest cards were. The ‘latest’ cards were from 1986 so it covers things like 1986 Topps, Donruss, and Fleer, as well as some oddball type of stuff. I spent most of my time in the 1986 section because that’s where my only cards were from. It would be a few years before I would even start owning any older cards.

Still, I occasionally would glance at the older stuff. And that was all found at the end of the book where there are some reviews of sets like T206 and Old Judge.

One of the things I particularly enjoyed were the pictures of the cards. At such a young age, I didn’t have much interest in reading too much about cards I couldn’t afford or had never seen. And while most of the book was in black and white, it contained some pages of full color cards and that really made them more ‘real’ to me.

Now, I’d like to say that seeing these cards opened up a whole new world of card collecting to me, but that wasn’t the case. The reality was that, as an 8-year-old, I didn’t have any aspiration of collecting those older cards. And I certainly didn’t have the financial resources. My main concern at that time was trying to put together enough loose change to buy a pack of Topps cards. An expensive card in those days was shelling out $2-$3 for a hot rookie or a star player. Anything beyond that just wasn’t feasible.

Plus, I didn’t have the interest. Just as kids today want cards of Mike Trout and Aaron Judge, I wanted cards of players that I grew up watching, like Dwight Gooden and Mike Schmidt.

But what the book did was make me aware of these older cards. Otherwise, at that age, I would have never even had an idea that such cards existed. And there, I first heard of things like tobacco cards and early candy cards. One of the biggest takeaways I had was that baseball cards had been around much longer than I would have ever believed.

Seeing the book recently and flipping through it brought back a lot of memories. And when I think about it now and when I first began to learn about older cards, that book is what served as sort of a tutor in a time when I was just learning about the hobby.