Most of the recent cards alleged to be altered on the Blowout Forum have either been more common issues like T206 and Goudey, or they’ve been post-war cards. Don’t get me wrong – many of those are big cards, including more Ty Cobb and Babe Ruth examples. But what caught my eye recently were a pair of 19th century cards.

If you’re new to the altered cards scandal, by the way, here’s a quick overview on what’s been happening.

The 1894-95 Mayo set is one of the more unique tobacco card issues. For one thing, it’s one of the earliest tobacco baseball sets featuring major leaguers. For another, the cards look much different than most and are sandwiched in between the early sepia style cards that used real photographs and the 1900s tobacco cards, which were mostly color lithographs. With their black borders and all black backs, they are a sight to behold. 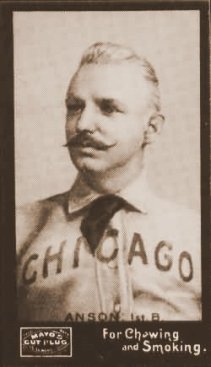 Recent Blowout posts here and here allege, respectively, that some Cap Anson and Kid Nichols cards have been altered. The Cap Anson card saw quite a jump in value, according to the post. If the two sales are indeed related to the same card, the Anson was sold as a PSA Authentic graded card in March 2017 for about $1,700, recolored/regraded, and sold again as a PSA 5 for $5,450. Similarly, the Nichols went from a PSA 4(MK) to a straight PSA 5, more than doubling its sold amounts, going from a shade under $2,500 to more than $5,300 (again, assuming the two cards are indeed the same).

We’ve seen bigger jumps in value on more expensive cards before. But the reason these allegations with the Mayos are noteworthy is because it’s an incredibly rare set. To date, PSA has graded only a little more than 600 of these N300 Mayo cards and many players have had only a few examples graded, speaking to the rarity.

Anson is a wildly popular player, of course, and he has 31 cards graded by PSA to date. But again, keep in mind that cards are resubmitted and if these examples were indeed the same card, it would show up twice in the registry unless PSA fixed it. In other words, that 31 number could be inflated. Nichols, for what it’s worth, has 23 cards graded and the theory about that number being slightly high would apply, too.

We are fortunate that some of these cards have survived such a long time. However, it’s hard to imagine that collectors can be all that thrilled that some of the few we still have among us could have undergone alterations.