The 1938 Goudey set has 48 basic cards but is only really credited with 24 different fronts. The first 24 cards in the set are merely repeated with cartoon sketches to create a ‘high-number’ series.

But while other players in the set have two cards, Hall of Fame catcher Ernie Lombardi actually has four. Now, it’s not that Lombardi is supposed to have four cards. But error and correction cards have given him more cards than others in the distinctive release.

Here’s a closer look at the four variations.

I hate to start off with the showstopper of the four right up front but it makes the most sense for how I’m laying this out.

This card, simply put, is easily the rarest of the group. And frankly, I don’t even know how many have ever been seen. This card is the reason for the variations and incorrectly shows Lombardi as a member of the Boston Red Sox.

I have have heard a few collectors state that it does not even exist. And most often, you’ll only see reprints of it. But famed auction house Christie’s auctioned an uncut 1938 Goudey sheet and it included the famous Lombardi Red Sox error. My guess is that no one at the auction house even realized what they had as they did not even mention the card’s significance in the description. However, after it sold for $50,000, my guess is they learned it was more important than they may have initially believed.

Over the years, I have heard this card was not distributed in packs and that the few copies of it only exist in hand cut form — cut from sheets like this. But I’ve never been able to verify that.

Because the card is so rare, it is difficult to even definitively state just how valuable it is. but it’s easily the king of the four variations. 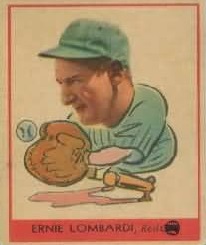 From the toughest to the easiest.

At some point early on in the distribution (perhaps, even prior to it), Goudey realized their goof. That the mistake was caught early is evidenced by just how few of the Red Sox cards there are.

Instead, a large number of the cards were printed and then the error was discovered before they were distributed. We can deduce that because of how the company dealt with the issue.

Stuck with a bunch of cards with the Red Sox name on them, Goudey came up with a quick fix. Their idea was to print a black baseball over the ‘Sox’ portion of the card and then add an ‘s’ to Red to make it ‘Reds.’

I mean, I’ve seen worse fixes, I guess. And this is probably better than throwing your hands in the air and simply leaving the Red Sox error stand. But given that no other cards have a black baseball on them, the whole thing just looks kind of bootleg. This is the easiest of the No. 246 versions to find.

While the Reds version with the baseball is the most common, this one is less so.

Why this card was created is anybody’s guess. After all, Goudey had essentially fixed the error with the baseball version that covered up the ‘Sox.’

Perhaps Goudey concurred with my earlier assessment of the low-quality nature of the earlier version and decided to fix it once and for all. But instead of merely having a change of heart, a more accurate hypothesis is that they simply didn’t want to discard all of the error cards, decided to fix those as best they could, and then really fixed the error when they were going to print more cards. Thus, these cards were probably part of a second run.

That second run was surely smaller because these cards are not as plentiful as the ones with the baseball.

Those three variations were all for Lombardi’s low-number series cards (No. 246). And fortunately, Goudey did not make the same mistake on the high-number cards of the catcher.

Lombardi’s high-number card, like the others in the set, has the cartoon drawings in the background. However, no variation of this one exists. All of Lombardi’s aforementioned variations are only found on his No. 246 cards and you won’t find any Red Sox or baseball overprint nonsense here.

The card’s picture looks just like all of the others, using the same image of Lombardi.

Determining exact rarity for the four cards in comparison against each other is difficult.

Even with the advantage of pop reports, we’re still mostly left guessing in terms of how rare some versions are against others. The reason for that is because grading companies did not always distinguish between the different variations. PSA and SGC have started tracking how many of the different variations they have graded but that doesn’t extend back to the ones they previously graded — a fairly large part of the overall population.

But here’s what we have in terms of the pop reports among PSA, SGC, and Beckett at the time of this printing.

Based on all of that, we can make a few general observations.

First, the Red Sox version, as stated, is next to impossible to find. We know this less by this data (since many No. 246 cards do not identify which version was graded) and more on not seeing them in the open market.

Second, the fully corrected version of card No. 246 is much harder to find than the makeshift version with the baseball.

All in all, it’s a fascinating error in a somewhat lackluster set that was not one of Goudey’s best efforts.