A Look at Some of Lou Gehrig’s Most Interesting Cards

Lou Gehrig had an illustrious career that ended in 1939 right at the end of the pre-war era. Nearly everyone is familiar with his story of ALS and his retirement from the sport at 36, dying shortly after at the age of 37. But he still had a career that spanned 17 years and was known for his consecutive games streak, playing in 2,130 straight contests.

It’s unsurprising that he has plenty of baseball cards. Here are a few of his more notable ones that have a bit of a story.

For all intents and purposes, this is the card most defined as Gehrig’s rookie. Note that Gehrig is in a few W461 Exhibit sets but the 1925 edition is the key.

Many collectors aren’t too familiar with Exhibit cards but they were incredibly important to the hobby and were printed for decades. This particular set was issued in 1925 and is blank-backed.

Gehrig saw time with the Yankees in 1923 and 1924 but did not become a full-time player until 1925. Thus, it’s understandable that he didn’t find his way into earlier issues.

The card is one of the more popular issues of the post-1900 pre-war era that isn’t mentioned all that much, to be honest. Even in very low-grade condition, it still sells for five figures.

It should be pointed out that Gehrig was also included in a few multi-year sets beginning in 1925. He was in the W590 strip card set issued from 1925-31 and also in another Exhibit set of postcards believed to be issued during the same years. But because the years are not marked on the cards, it is not possible to date when a particular one was printed.

Gehrig, like most of the game’s big stars at that point, was featured in the 1933 Goudey set.

Like a few other players, Gehrig has more than one card in the set. But as was also the case with Jimmie Foxx, Gehrig’s second card was merely a repeated version of his first one. Both cards had the same picture just with a different card number.

As I’ve covered here, while the two cards are essentially the same, one is tougher to find. Gehrig is found on both card numbers 92 and 160 but No. 160 is the more difficult one to find. Despite that, pricing for the two is not always as different as you might expect with some people paying nearly as much (or as much) for the more common one.

While I wish Gehrig received two different poses in the 1933 Goudey set, the company actually did that in the following year.

Gehrig was the spokesman of the 1934 Goudey set, offering a commentary on the backs of cards for players featured in the set. While many players retained their 1933 images, Gehrig got two completely new poses.

Gehrig’s presence in the set is even more interesting given that his more popular teammate, Babe Ruth, is nowhere to be found. Ruth was the de facto poster child the year before as he was featured on four different cards but his absence here is puzzling to say the least.

All kinds of theories have developed as to why he was not included but none have ever been definitively proven. Even more bizarre is that Ruth does appear in the very similar 1934 World Wide Gum issue, which was essentially Goudey’s Canadian arm. 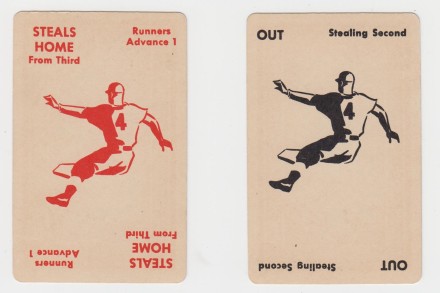 Never heard of this one? Most collectors probably haven’t.

Part of the reason for that is because Gehrig is not named on a card. No players are actually named as the cards featured only generic baseball players. But one in particular sure looks like it could be Gehrig.

I go into greater detail here but, in particular, the card of a sliding baserunner could be viewed as Gehrig for a number of reasons.

The card is the only one in the set that features a player with a jersey number — and that was Lou’s No. 4. It also featured a player that appears to be stealing home (one of the cards featuring the pose is actually a runner stealing home) and Gehrig was the top player achieving that feat in the 1920s and 1930s. In fact, stealing home was even his first recorded stolen base and SABR wonders here if he may have been the only player to ever accomplish that feat.

I’m not 100% convinced the card features Gehrig but several signs suggest that it could.

Mentioning Lou Gehrig cards without mentioning his consecutive games streak would be kind of fruitless. But frankly, there aren’t a ton of pre-war Gehrig cards where that’s the focal point. Contrast that to modern times where Cal Ripken’s breaking of Gehrig’s streak was celebrated widely on all sorts of cards. In other words, the hobby’s come a long way.

At any rate, at least one card did make sure to mention how notable Gehrig’s achievement was, and that’s his 1934 Quaker Oats Ask Me Game card, which was issued in a set for their puffed wheat product.

These cards were part of a trivia game that was mailed to customers. They have a stop-sign type of design with corners that appear to be cut but that is how they were actually distributed.

Gehrig is featured as an answer to a question about the player with the most consecutive games played. The card is interesting because his 1,350 games mark is what is cited since that was where the streak had stood at the end of 1933. At the time, he had just broken the record of Everett Scott, who played in 1,307 straight games. Gehrig, of course, would go on to play in hundreds more before his streak would end.

The 1934 Butterfinger photos featured a variety of players and Gehrig found his way into the set.

The photos are pretty thin and printed on paper stock. However, a few were printed on thicker stock and contained advertising print on them. As I’ve covered here in the past, these are significantly harder to find than the regular photos and it’s likely because they were used as store or display advertisements.

Not every player is known with the ad overprint but approximately 1/4 of them are. Gehrig’s is one of those.

You can see a picture of Gehrig’s ad photo here.