Crack that Slab: When is it Okay to Free a Graded Card?

Even if you want to, it’s not always best to de-slab those graded cards

I’ll admit it — I prefer most of my cards in raw, ungraded condition. Now, I certainly do own some graded cards and, as I’ve written before (and non-Blowout scandals aside), there are plenty of reasons why grading companies are necessary. But if I could, I’d probably keep all of my cards raw and unslabbed.

Don’t get me wrong. I love the way cards look in slabs. And if I only had a few cards in all, I’d probably try to have them all graded just for the look. But when trying to store thousands of cards and be able to see them, etc., graded cards are just not real practical. I keep all of my cards (even my graded ones) in binders and that really optimizes space.

Because of that, I have been known to de-slab a lot of cards. Cracking open graded card cases is relatively easy. In all, I’ve cracked more than 200 of them. My general take in terms of ease is that SGC’s are generally the easiest, PSA’s are the most flexible and make the result a lot less predictable, and Beckett’s are the most difficult. All, can be done fairly easy, though, and you can see a number of ways to do that on YouTube.

But while I remove most of the cards I buy from their graded tombs, there are several examples when that’s not a great idea.

Now, as we know from the trimming scandal, graders aren’t perfect. In fact, you might even say grading companies have shown themselves to be a bit careless. All of that said, you’re being naive if you think they’re going away.

Collectors will still pay much more money for a high-grade card when it’s a slab than they will when someone asks them to take a chance on a raw card. Period. Even though buying a high-grade card in a slab may not guarantee you’re getting a card that hasn’t been altered, chances are you you probably are. For all of the talk about altered cards that have been discovered, it’s still a relatively low number when you take the entirety of all cards in pop reports with high grades.

Point blank, if you’ve got a high-grade card (or even a mid-grade one from the pre-war era), it’s best to leave it alone. If you really can’t stand to keep it in the case, I’d recommend buying a lower-graded raw one and selling or trading the graded one. I’ve done that plenty of times.

Sure, cracking a high-grade card may seem like a lot of fun. But there’s literally not much point to doing so. In general, most of the cards I crack open are graded a 3 or less. Anything above that is more likely to stay in the slab. Even that’s not a hard and fast rule, though. More expensive cards will stay graded, even if only authentic. Some lesser graded ones will also stay slabbed if they are particularly fragile.

Are you planning to sell a card? If so, best to leave it in that slab in most cases.

Sure, some collectors might not mind raw cards (my hand is raised on that one). But I’d always rather buy a graded card than not if the prices are comparable.

Even if you aren’t planning to sell a card immediately, if there’s a chance you might in the future, you may want to keep it slabbed. Even in the case with low-grade cards, buyers would almost always rather have a graded one if the price for a raw one in similar condition is the same.

It should be pointed out that some sellers won’t take that advise. And that’s sometimes because they’ve got something to hide. For example, a seller may crack a low-grade card if it has great eye appeal and try to convince the buyer that it could receive a high-grade. But that’s simply not being honest and cracking a card under that guise as a seller is just poor form. It’s always best to disclose a card’s history if you know it before you sell it.

And as a buyer, never ever (ever) buy a raw card in the hopes that it will achieve a high grade (or even a numerical grade at all, to be honest). We’ve all done it to some degree but it’s never a great idea as it can only lead to disappointment if you find out a card was trimmed or altered in some other way. 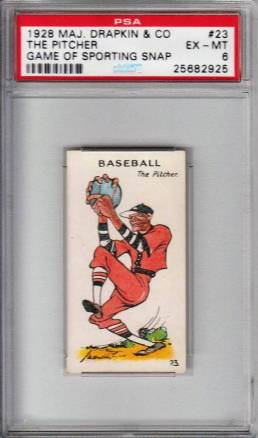 So, I have a subset of the baseball cards from the 1928 Major Drapkin Sporting Snap set. Most collectors couldn’t tell you anything about it and you don’t see the cards around all that often. It’s a somewhat tough issue but I wasn’t really planning on pursuing the entire subset.

When I first found a card available, I immediately purchased it. I debated cracking the card as it was a mid-grade issue and, well, I just really wanted to. But I left it alone thinking I might buy more. I just wasn’t convinced that was the only one I was definitely going to buy.

Turns out that was a good decision.

I’ve since purchased the entire set with three of the four graded. The fourth will eventually be sent in for grading itself.

Now, if I had purchased the other three cards in graded condition, I would have been kicking myself for cracking open the first one. I would have wanted to grade that one as well and that, in the end, would have cost me more money and I would have also had to wait for the card to return.

Point being, if there’s a chance you want to put together a subset, set, or collection of graded cards, you might want to think about before cracking one.

Collectors change their minds all the time and I’m no different. So it stands to reason that, before you crack open a graded card, make sure it’s what you really want and that you won’t have any regrets later.

Here’s the thing — while you can always have a raw card graded, you can never put a card back into a cracked case. Well, I mean, not unless you carefully do it and don’t mind committing fraud as some collectors have done.

There is no ‘undo’ button when you crack open a card. There’s no white out here. If you open a slab, it’s opened.

Now, some collectors will be quick to point out that you can always have that card re-graded. That’s entirely true. And, heck, some collectors even routinely crack open cards they feel deserved higher grades and tried resubmitting them in hopes of landing a better grade. Sure, you can resubmit a card for grading that already exists in a slab but many collectors don’t want to do that as they feel a grader’s opinion of it will be compromised.

Regardless of any of that, the point is that no card is guaranteed to receive the same grade when it is reslabbed. Heck, I was even told once by a grader that a card they open for reslabbing (due to a cracked case, mislabeling, etc.) is not even 100% guaranteed to receive the same grade that it had. That would be a rare case but you get the point. If you open a card, make sure you’re positive that you won’t want it graded later. 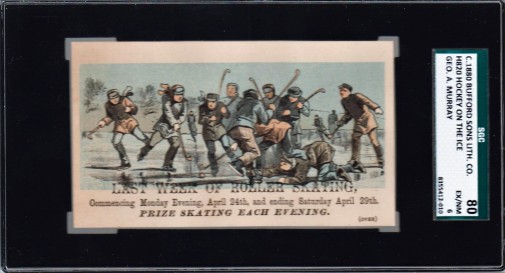 So, you’ve made it this far and none of these things apply to you. If you decide to open that slab, I recommend doing one thing – keeping the flip.

The ‘flip’ is the label that shows a card’s grade. Now, that doesn’t mean that if you decide to sell it, you’ll be able to get the kind of price you would for a card slabbed in that condition. After all, why would someone pay you a PSA 3 price for your raw card when they can buy a still-slabbed actual PSA for that price?

But keeping the flip can be helpful for two reasons.

First, if you do sell the card, a buyer may that your word into consideration if you tell them a card was previously graded in such a condition and can offer them the flip. Again, don’t expect the same price as a card still graded but it might help you make a sale over a completely raw card with no grading history. Or if you’ve lost the flip, it’s always a great idea to keep some pictures of your card while still graded. That may also help prove it received a grade you said it did.

Second, it’s always helpful to know how a card was graded. That will help you in your own ability to accurately assess how other raw cards you have may be graded. Try to determine why a card received a grade that it did. Look for flaws. That will, in turn, help you to better assess other cards you want to send in for grading. And if you have the flip, you’ll always have a particular card’s reference point and you won’t need to rely on your memory or keeping a cumbersome database.