What are the best cards from the Play Ball series? Glad you asked.

Play Ball printed baseball cards from 1939 through 1941. While some other sets were printed during that time, Gum, Inc. (the set’s producer) was arguably the most important company producing baseball cards at the time.

They had only three sets but plenty of key cards exist. Here are what I consider to be ten of the best. This isn’t a clean cut list of the most expensive cards and there aren’t any real parameters here other than my own feelings. These are simply cards I consider to be notable for one reason or another and anyone else’s list would almost certainly be different.

The only rule I really followed here was no double dipping between the 1940 and 1941 cards since those pictures were the same. If I included a player’s 1940 card, I didn’t include their 1941 issue (and vice versa).

Many collectors will probably be surprised to find this card on the list. But Berg is an iconic figure and this is one of his final cards, if not the last contemporary one as his career ended.

Berg’s final season was 1939 but he still squeaked into the 1940 Play Ball set. He is noted as a retired player on the back of the card but also cited as a coach for the team. His card is unique because he was listed as a coach on the back but shown in a hitting pose on the front.

If you’re not familiar with Berg, baseball was just one of the things that made him interesting. After his career in the sport, he served as a U.S. spy, which has made his cards even more desirable. Berg wasn’t a star on the field by any means but it’s his post-career work that has driven his prices up.

One of the last contemporary cards of a baseball player turned U.S. spy? I’ll take it. 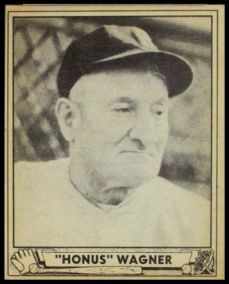 This card is deceptively intriguing. The 1940 Play Ball set has many former players in it and, at first glance, Wagner seems to just be one of those.

But collectors will notice that a recent image of him is used and shows him as an older chap. He’s also in full uniform and wasn’t the team’s manager, so what gives?

Wagner was actually a coach on the team, serving as a hitting instructor. He was such a beloved player in Pittsburgh that keeping him on the team in any capacity was a smart move. And the fact that he was a .328 career hitter and eight-time batting champion probably didn’t hurt, either.

Overall, it’s just a cool card of a legendary player. 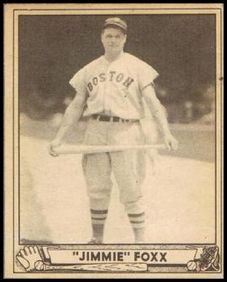 If a card is making this list purely for aesthetics, it’s this one.

Foxx’s card wouldn’t make many top lists, I’m guessing. He’s a major star, no doubt, but the card isn’t super expensive and, as a low-number card in the 1941 set, not even one that is all that difficult to find.

But the picture on this one is just fantastic. It’s a classic pose with Foxx’s massive arms making his jersey look a bit odd with the large sleeves.

A similar case can be made for the one I present below with Ted Williams’ 1940 and 1941 Play ball cards in terms of which one to use. But in this case, I just love the actual photo of Foxx in his 1940 Play Ball set. 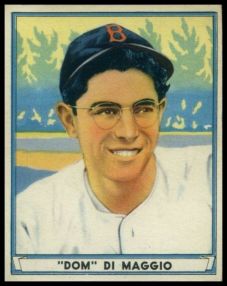 While brother Joe steals the spotlight in the Play Ball sets, Dom’s lone Play Ball card is a key one.

One of my favorite things about the card is that Dom hardly looks like your prototypical ballplayer. The glasses don’t help. He looks more like your typical milkman or 1940s gas station attendant than he does major league slugger. But don’t let the looks fool you. DiMaggio was plenty good and is one of the more underrated players of his time.

Had he not been overshadowed by Joe, my guess is that his seven all-star appearances and nearly career .300 average (.298) would stand out more. And while it’s often pointed out that players like Joe DiMaggio and Ted Williams missed some prime years due to serving in World War II, so did Dom, who sat out in 1943, 1944, and 1945. Give those years to him and you can probably add about 500 hits to his already impressive 1,680 total. Not quite a Hall of Famer but a very, very good player nonetheless.

Joe DiMaggio finally makes an appearance on my list with his 1939 Play Ball card checking in at No. 6. That will likely be an abomination to many collectors. Too bad. My list, my rules.

So what’s my beef with this card that would end up much higher on some other lists?

In all seriousness, you can make a case for this being higher — particularly if you’re looking for the most expensive cards. I’ve got no real bone to pick with it. But while it’s a great card, it’s not even close to his rookie issues of 1936, despite the fact that it is often erroneously listed as such.

That doesn’t necessarily matter to me. After all, only three rookie cards appear on this list at all. But I do happen to believe that the card is artificially pumped up a bit by the false claims of it being a rookie. It’s commonly listed as such on eBay, for example. DiMaggio has several 1936 issues that qualify as that — his 1936 World Wide Gum card, his most notable. Heck, he’s even in the 1938 Goudey Big Heads set twice, which was issued a year earlier this card.

The black and white card looks great and is a classic picture of Williams. But the colorized card is also one of his firsts and also a really nice look.

I’m going with the latter here but could have a different opinion if you asked me tomorrow. Heck, I might change my mind by the time I finish this article.

Key player, valuable card, nice aesthetics — this one checks all the boxes and certainly has earned a spot in the Top 5. 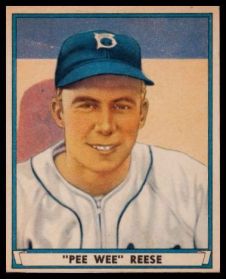 Pee Wee Reese’s rookie card would probably be a bit underrated on other collectors’ lists of top Play Ball cards. But it’s an important one for several reasons.

First, it’s a high number card in the 1941 Play Ball set, boosting its value and making it a rarer card. It’s also more valuable than a lot of collectors not pursuing this set probably realize. The card is tough to find, even in lower grade, for much under $200.

Now, it is important to note that this card may not be a Reese rookie at all. That’s because some collectors believe that the high-number cards from the 1941 set were actually issued in 1942.

However, the card is mostly accepted by the hobby as being a rookie issue and is classified as a 1941 card. Further, it has never been definitively proven that some cards were printed in 1942. A key high number rookie of a Hall of Fame player is certainly worth of being on this list.

One of the most important Play Ball cards actually features a player who had long since retired — Shoeless Joe Jackson.

Like the other banned players from the 1919 Chicago Black Sox team, Jackson’s major league career ended after the 1920 season, a full 20 years before the 1940 Play Ball set was produced. But while post-career cards are often frowned upon, this one is important for a few reasons.

For one, its value is through the roof. Half-decent low-grade copies of it start in the $700-$800 neighborhood, a somewhat obscene value. But the fact remains that, while likely overvalued, this is a card that collectors are willing to pay for and that helps raise its importance.

Additionally, the card is sought after as a World War II era card, even though Jackson had finished playing. The reason for that? In part, it is almost surely because Jackson did not have many cards from his playing days and also because, even after the World Series scandal from 1919, Jackson barely appeared on other cards.

I’m not a huge fan of post-career cards and I certainly don’t think this is one of Jackson’s better cards. But given the age of this one, its popularity, and the few Jackson cards that exist, it is one of the better, more important Play Ball cards. 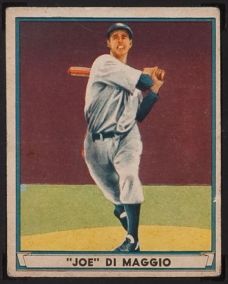 Some will be surprised to this card so high on my list but this is probably my favorite Play Ball card of them all.

The Foxx from this set made my list for the aesthetics and, similarly, this one does, too. It’s just a really nice action shot of DiMaggio here when many of the other cards on this list are portrait poses. I think it’s one of the better action poses in the entire series, featuring DiMaggio’s full, iconic swing.

Adding to its intrigue is that the card is a high-number issue, making it a bit harder to come by. Pop reports might suggest otherwise since this is one of the most-graded cards in the set. But as I’ve written before, pop reports can also be deceiving as the top cards will always be graded frequently as collectors buy and sell them with more regularity and for greater amounts.

I could look at this card all day. Decent low-grade copies of it start around $700-$800, though the figure rises to more than $1,000 with little improvement on condition.

As is the case with most people that assemble meaningless lists like this, I had a pretty clear-cut top card before even starting this article.

This spot belongs to Teddy Ballgame.

Williams is not only an all-time player but his 1939 Play Ball card is tops on the list because it’s his rookie card. The card in this slot won’t surprise any serious collector as it’s not only the most important card in the Play Ball sets but one of the most iconic pre-war cards in general.

Williams’ Play Ball rookie has shot up in value over the years. Very low-grade cards have gotten much more expensive and usually start in the $1,250-$1,500 range. Nicer mid-grade cards start around $4,000-$5,000 these days.

Iconic rookie card of one of the most important players of all time — it’s easy to see why this one tops the list.