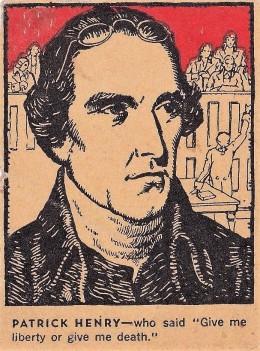 The Hall of Fame pitcher bails out an otherwise forgettable set

The 1930s Post Cereal Famous North Americans set is exactly what it sounds like. This food release included cards of famous North Americans throughout the history. Classified as F278-50 in the American Card Catalog, it’s not a set that too many are familiar with. But those that are typically know it for a single baseball card featuring Hall of Famer Christy Mathewson.

The set is almost entirely a non-sports one, so it would otherwise go under the radar for sports collectors. But because Mathewson is in it, it’s somewhat tracked by by sports fans.

The cards have a unique look with black and white cartoon images of subjects and a bright red background. They almost sound a little like the 1914 and 1915 Cracker Jack cards but really look nothing like them by comparison.

All sorts of interesting characters are found in it so, for non-sports collectors, it is somewhat popular. George Washington, Abraham Lincoln, Buffalo Bill, Benjamin Franklin, Pocahontas, and Alexander Hamilton are just a few of the household names in it. Still, as a 1930s issue, there just isn’t too much demand for it with the cards for even many well known personalities hovering around the $5-$10 mark.

One of the issues with the cards is that they are hand cut. These cards were printed on Post Cereal packages in panels with four to a panel. So it’s unsurprising that you’ll usually find them with jagged or, at the very least, slightly uneven edges. 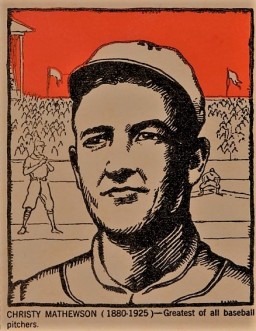 While the set includes some famous people, including presidents, the key to the set is easily the Mathewson.

A large portrait of Mathewson is featured on the card with a baseball scene in the background. Mathewson’s name is on the front and it includes his years of birth and death. His card makes a bold claim in calling him the ‘Greatest of all baseball pitchers.’

As stated on his card, Mathewson died in 1925. Thus, this wasn’t only a post-career card (his last season was in 1916) but a card that was printed after his death.

Despite all of that, it is desired because of its age. After all, a card like this is different than a 2000s era Topps card picturing the famous pitcher.

In lower-grade condition, you can generally get it around $100-$125 when it’s offered. The problem is that these cards are somewhat hard to come by and you don’t see the Mathewsons all the time. Because of that, sellers can be known to jack up the price based on the rarity. The card is somewhat rare, no doubt. But given that it was produced well after his career and is a hand-cut card, it doesn’t carry the same value as Matty’s tobacco or early candy cards.