Many collectors have seen the 1935 Rice-Stix cards … but what about the shirts? 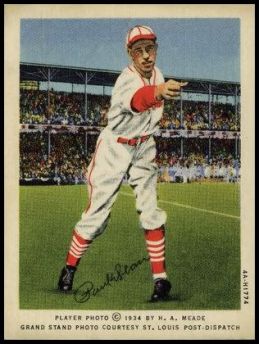 The 1935 UM-7 Rice-Stix cards of Dizzy Dean and brother Paul Dean are heavily sought by collectors. They aren’t super easy to find and are often in low-grade condition when they pop up for sale. eBay usually has a few, but often at exorbitant prices. Today, the cards usually sell for at least a few hundred dollars, even in low-grade condition — Dizzy’s obviously sells for more. The photos on the cards, as stated on them, were from the St. Louis Post-Dispatch.

But while the cards are relatively well-known to collectors of pre-war era stuff, what is lesser known is that they were distributed as part of a promotion for Rice-Stix shirts.

Rice-Stix was a large business operating out of St. Louis into the 1950s. How big were they? Wikipedia contends that they were the biggest U.S. clothing manufacturer in the 1950s.

At some point, the company decided to produce shirts featuring baseball brothers Dizzy and Paul Dean. The fit, surely, was an easy one. Both played in hometown St. Louis and Dizzy, in particular, was possibly the best pitcher in baseball at the time. His brother Paul was no slouch, either, winning 19 games both in 1934 and 1935, around the time these cards/shirts were distributed.

Creating a product revolving around two of the local baseball team’s star players? Not a bad idea. Unfortunately, the shirts are, um, not so great.

The shirts were packaged inside of a decorative box bearing the same images of the pitchers as is found on the cards. The boxes, like the shirts, are extremely rare. Part of the reason for the rarity of the boxes is that they were not given to everyone making a purchase. Rather, these were boxes that held several shirts and likely were how the stores received them. Thus, while the stores had the boxes, my guess is that not many made it into the hands of customers.

Hardly any collectors would have ever seen the shirts or boxes until recently. The boxes, as I said, are very rare. And like most apparel, I suspect 99.9% of the shirts would have been worn, filtered down through the secondary market/Goodwill, and then ultimately discarded. But in 2015, REA gave most collectors their first glimpse of the shirts. Shown here is a picture from REA’s auction (the shirts and box sold for nearly $2,300, speaking to their rarity).

The shirts were polo shirts and at least printed with a single-color fabric. But with pointed collars and a single button at the top, they mostly look out of style today. Who can say exactly what colors were available but REA’s auction showed the shirts in white, a bright yellow, and a dull looking tan. Woof.

Worse still, they included a picture of the brothers on the chest — the same images used on the cards. A far better look would have simply been to include the signatures of the brothers or something a bit scaled down. With the logos, these (especially given the colors) just scream fast food restaurant or something.

Now, I get it. The company wanted to tie in the brothers. But the picture just looks out of place on a polo shirt. At least for grown men. The shirts also feature the phrase, ‘Me and Paul’ on them, which is obviously from the standpoint of Dizzy. In other words, it’s just all kind of confusing.

They may not look all that bad in the context of the 1930s. But, man, I can’t get behind this. In the words of Al Czervik, anyone caught wearing these shirts should be given a free bowl of soup.