Recently, I compared two of the more popular 19th century tobacco card sets in Allen & Ginter’s N28 and N29 sets. This time, I wanted to take a look at comparing two of the most popular 20th century sets, T205 and T206.

Plenty has been written on both sets so this won’t be an exhaustive overview of them. If you want to learn more about the sets, search on the front page in the box at the top on either and you’ll find several articles about them. Instead, I want to take a look at some of the distinguishing characteristics of both and how they line up with each other. I’m not sure the end goal is to declare a ‘winner’ as much as it is a reasonable comparison of the two. 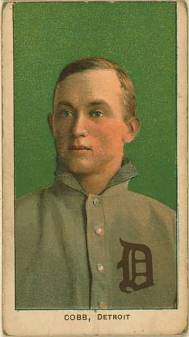 Both layouts are pretty attractive and are a big reason of why collectors flock to these cards. While both are great, they certainly are different.

T206 cards have a white border and look like a lot of other traditional cards from that era. The artwork in the set is certainly better than most but the look in terms of the design of the card is similar to others. White border, standard cigarette-sized card, player info on the bottom. It’s a very common layout for cards in that time.

Where the T206 cards differ from many others, of course, is in the back. Numerous advertisers are printed on the backs and some of those are quite rare.

T205 is markedly different from T206 and, frankly, most other cards. The distinguishing characteristic of those is a gold-colored border. Further, two different styles are present with a large headshot for National League players and a smaller headshot inside of a baseball diamond for American Leaguers. T205 has various back advertisers, too, but are not nearly as diverse as T206. Another big selling point of T205 cards is the presence of a bio and statistics on the back. They were one of the first (if not the first) sets to do that.

This one’s pretty close but T205 is the winner here in my mind. The layout is more distinguishable from other cards with the gold borders and the bio/stats on the back make for a more substantial card.

The T206 set is more than twice as large as the T205 issue and, as you might suspect, has a more extensive checklist.

The T206 set not only has a larger variety of the types of players in it, but also has more stars. Many of the players in it are also featured in T205. The difference is that T206 has two, three, four, and, in the case of Hal Chase, even five cards for many players.

That’s one of two things that makes the difference here. The other? The presence of the Big Four in the T206 set.

Led by the most expensive card of all time, the Honus Wagner T206 card, the Big Four found in that set are among the most desirable pre-war cards of all time. All are rare and there’s just nothing collectively like them in the T205 set. The Cycle-backed 1-loss Mathewson error and the Hoblitzell No Stats cards in the T205 set are certainly rare in their own rights. And the many varied errors add to the intrigue of T205’s checklist, too. But no one would put those cards up against the Big Four in T206.

A gaggle of Hall of Famers, Honus Wagner T206, Big Four — no comparison here. This is akin to taking a knife to a gun fight.

I’ve written about this before but the rarity (or lack thereof) of the T206 set is sort of its fatal flaw. Despite the fact that it was printed in massive quantities, cards are selling for record prices and demand has managed to outpace supply. But there is little doubt that there are a large number of these cards still around more than a century later.

At the time of that linked article, there were more than 300,000 graded T206 cards with only about 70,000 graded T205s. T205 isn’t exactly scarce, either, but the cards are much rarer than T206. That’s one reason I sometimes wonder if that set is the better long-term investment. 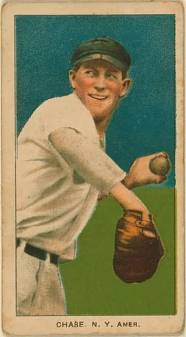 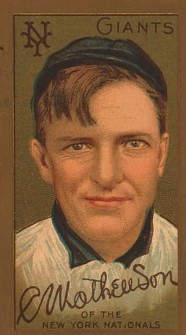 The artwork in both sets is flat out gorgeous. Each set undoubtedly has some duds but when you’re talking more than 700 cards between the two, that is bound to happen.

Most of the cards are wonderfully done and some of the cards are all time greats. The Mathewson from the T205 set shown here, for example, has been cited by some as one of the top pre-war art cards in history.

I think the quality of the images in T205 is a little better than in T206. But I think the more varied pictures in T206 give it an advantage of T205 in that area. Result? A push. Ask me tomorrow and the answer might be different. Really tough call here.

The T206 set is certainly collected by more people. While T205 is heavily desired, you’ll find even modern collectors wanting to add T206 cards to their collection, simply because it’s the set the Wagner comes from.

Both are in demand, clearly, but the amount of interest in T206 is just crazy. Interestingly enough, its availability helps greatly with that. I’m not convinced it would be as collected if the cards were harder to find. Collectors can find both types of cards relatively easily. However, you’ll find more people attempting to tackle the T206 set, even though it’s much harder to complete, even without the Big 4.

This one, as you can see, is pretty close. You’ll find collectors on both sides with their own preferences. Personally, I think the T206 set is the most important one of all time, in any era, so that will always get my nod. Does that make it better? Not necessarily, but you can make an argument there, too. As someone that collects both of these types of cards, I can easily understand the allure towards collecting either.