Dating the Overland Candy Wrapper Series is a Challenging Task

While commonly listed as a 1936 or 1938 set, that information is inaccurate

On some rare occasions, the baseball ‘prize’ for children wasn’t found inside of a package. Sometimes, the packaging was actually the collectible. As I’ve written about previously, some cards were printed directly onto candy boxes and those can be quite valuable today.

But one of the more unique packaging efforts that featured players is on a rare set from the 1930s. See, instead of printing player depictions onto boxes, the Overland Candy Company actually printed them on wrappers that held their product. Based in Chicago, Illinois, Overland sold a candy product for one cent, packaged inside of a 5″ x 5 1/4″ wrapper.

Classified as R301 in the American Card Catalog, the Overland Candy Wrappers have previously been identified as both 1936 and 1938 sets at various times. But neither of those are technically correct and the set, as we’ll see shortly, actually spans over numerous years. 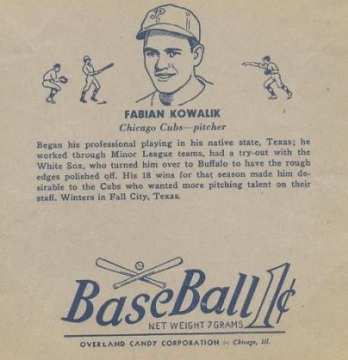 It is easy to see how 1936 could have been viewed as a possible year. That is because, at least some of the wrappers were almost certainly printed at that time. We can tell this by looking at the wrapper of a relatively unknown player named Fabian Kowalik. Kowalik had a moderately nondescript career, going 3-12 as a pitcher over parts of three seasons in the majors. It’s his last season, 1936, that is the key here. That year, Fabian started with the Cubs, then pitched for the Philadelphia, then went to Boston. His wrapper biography mentions he pitches for the Cubs but pictures him with the Phillies. That tells us it would have been printed at some point in 1936.

While many wrappers discuss 1934 dates, indicating they could be a 1935 issue, I haven’t seen any evidence yet to definitively declare the earliest ones would have been printed that soon. Still, it remains a viable possibility. Many card biographies refer to the season before as they wanted to give the collector the most up to date information. Card companies obviously are still following that practice today. For that reason, I’m not sure I would definitively state none could have been produced in 1935.

More than One Year

… How do we know they weren’t printed in only one year? Because some of the players featured in it were not even in the majors in 1936.

There are several instances of this and other evidence on others proves some were printed later than that. Ken Keltner, for example, is in the set but his career didn’t start until 1937, also helping us to prove that his would have been issued after 1936. Joe Gordon did not play in the majors until 1938, yet he is also included.

So we know from all of the wrappers mentioned so far that the set started no later than 1936 and ran until at least 1938. But could it have run even later than that?

Yes, and in fact, we know from others that it definitely did.

How Late Can They Go?

The wrappers undoubtedly continued past the late 1930s and into the early 1940s. Again, more wrappers and their biographies prove this.

For one thing, Pete Reiser is included and his career didn’t begin until 1940 when he started with the Brooklyn Dodgers. And this Net54 thread suggests a few others with things that didn’t happen until 1942, meaning they would have been produced either then or in 1943.

What’s it all mean? Essentially, we’ve got an issue that started in 1936 and ran through, at the very least, 1942. While that gives us a clearer picture of the dating, we’ve still got some questions. Were some printed in 1935? Were some printed later than 1942? Were ones that were printed earlier reused and printed over several years (thus, making them more plentiful)?

Despite some clarity on the dating, there are still more questions.