What is the True Number of Cards in the T206 Set?

The T206 set is no less than the most iconic baseball card set of all time. With more than 500 cards printed, it’s a massive issue. But how many cards belong in the actual set?

Surprisingly, there’s no clear cut answer accepted by everyone. Here are some possibilities from the greatest number of cards to the least.

Keep in mind, these are simply some suggested numbers based on popular theories. Mixing and matching certain cards could present even more scenarios. I simply developed a few of what I consider to be more common ones.

525 is somewhat of a popular choice these days for some collectors, even if it’s not really the accepted number.

That number includes the standard 524 cards plus a Ty Cobb rarity. This Ty Cobb cards has the same picture as his red background portrait card found in the T206 set. The only difference is the back, which has an advertisement for a Ty Cobb brand of tobacco instead of the more common T206 advertisements, such as Piedmont or Sweet Caporal.

Great debate has ensued over the idea that this is a T206 card with reasonable arguments found on both sides of the aisle. Personally, to me it looks very much like a regular T206 card. But I also consider it to be a one off card of sorts and a special premium as no other card in the T206 set (or elsewhere) is found with the Ty Cobb advertisement back. Because of that, I would leave it out of the recognized set.

Now, the same pose on the front as found in the standard set so, even if you consider it a T206 card, why would it be in addition to the ones already mentioned? The argument some collectors have made for calling it No. 525 is that it is not merely a different back like the others and that it is a special premium card, separate from the rest. Thus, it should be treated differently. I don’t really agree with that but the argument is out there.

By the way, in case you’re wondering about the official ‘rule book,’ (aka, the American Card Catalog), Jefferson Burdick did indeed call the Ty Cobb-backed card a T206 issue.

The card is ultra rare (despite a recent find of them) and is one of the more expensive pre-war cards around. 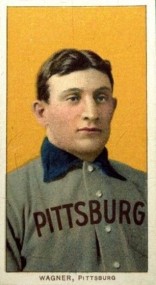 524 is the most accepted number when trying to nail down a checklist for the T206 set.

It includes the standard 520 cards, as well as the Big 4 rarities, but does not count the Ty Cobb mentioned above. The king of those rarities, of course, is the Honus Wagner card. The Wagner is highly sought after because of its rarity. It was printed in small numbers as it was yanked early from production.

Many theories exist as to why it was pulled but the two most prominent ones are that Wagner did not want his name associated with tobacco products or that Wagner simply could not reach an agreement for his image to be utilized. Whatever the case, the card is rare and is, pound for pound, the most valuable baseball card on the planet.

The other cards in the Big 3 are the shortprinted Eddie Plank, and a pair of error cards for Joe Doyle and also for Sherry Magee.

Many collectors pursuing the set shoot for 520 and then quit. But there are undoubtedly 524 different cards printed. The only real question is if all belong when trying to determine the truest number of cards in the release. 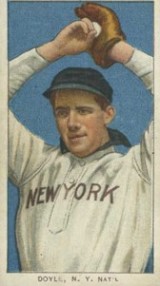 While not often cited, I think a reasonable argument for 522 could exist as well.

Here, we count everything in the standard 524 but leave out the Doyle Nat’l and Magee errors.

Now, to be clear here, each card does have a corrected counterpart and a completely different card, per se. Joe Doyle was a pitcher for New York, but he was with the American League’s Highlanders, not the National League’s Giants. His early T206 cards stated he was a member of the Giants and added the ‘Nat’l’ designation after his name on the front. The error must have been found quickly as that part of the printing plate was likely covered up to remove the error from subsequent cards.

Similarly, some Sherry Magee portrait cards have his last name mispelled as Magie. This was not caught as quickly as the Doyle but it was corrected later.

So if legitimate corrections for these cards exist, they are truly different cards, right? Well, yes. The argument here, however, is that not all error cards are always counted as being part of sets.

Take, for example, the Jimmy Dykes cards found in the 1933 Goudey set. Dykes has a card in the set with a legitimate error, listing his age as 26 on the back, and also a second with a legitimate correction, fixing the mistake and changing it to 36. But when the checklist for that set is cited, it’s almost always called a 240-card set.

Then, think of post-war sets like Topps issues, which had many corrections and errors. Those cards are never really figured in to the total number of cards in the set. They may be mentioned by some as cards needed for a master set, I suppose, but they are never considered actual additions to a card set because the corrected cards fixed a mistake that wasn’t supposed to be there. Why T206 gets a special treatment is probably more about the hypersensitivity around that set than it is about trying to use logic when determining how many cards should really be counted in the checklist.

And as more icing on the cake for the 522 crowd, this is actually the number cited by Jefferson Burdick in his American Card Catalog. While he does not have a checklist, my guess is that he did not count the Doyle/Magie errors. He did count the O’Hara/Demmitt team changes and we know that because he valued them at $1 in his book, which was significantly higher than the $.10 commons for others.

Some collectors might even try to make an argument for an even smaller set. The idea here is that there are many cards with the same pictures but only slight differences.

For example, cards of Bill Dahlen, Kid Elberfeld, Ray Demmitt, and Bill O’Hara all have cards with only slight uniform modifications on their pictures. I throw this option out, though, because the pictures are indeed different.

Others might point to cards with even smaller differences. Specifically, cards of George Brown and Frank Smith have the exact same picture but with only print at the bottom that is different on some cards reflecting team changes.

There’s a better case for these cards than the others but, again, these are different cards that were intended to be different and update the set as the years went on.

I don’t see much of an argument here.

Finally, a word about oddities is needed here. There are many of them found in the T206 set. A bunch can be explained away with issues with printing plates. Some, like the newest one, the Pfeffer ‘Chicaco’ card have obscured letters, almost certainly due to part of the printing plate being obscured.

These have been deemed as actual variations but, in my opinion, should not be counted as completely different cards. I think a middle ground of recognizing them as unique (and even valuable) but not counting them as truly different cards can be reached.

So what about me? Where do I stand?

While a strong case can be made for 524, I think the real number should be 522. Until we start counting errors in all sets across the board, I don’t personally know why we make an exception for T206. The Magie and Doyle error cards were corrected but, to me, should only be counted in a master set context.