A sale of a rare autographed postcard will raise some eyebrows

I had watched with great interest as a 1934 Exhibit card was being auctioned this month. Typically, autographs don’t do much for me personally, but this Exhibit was particularly unique. 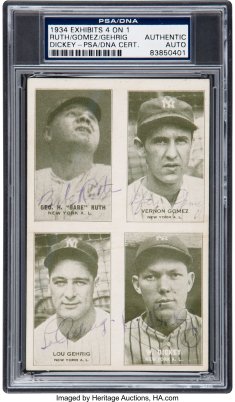 This Exhibit card included four New York Yankees on it, including Babe Ruth, Lou Gehrig, Lefty Gomez, and Bill Dickey. All Hall of Famers and all four had actually signed the amazing piece that was being offered by Heritage.

The card sold this weekend and the final selling price was a healthy $38,400. But while that is a strong price, it’s also a significant drop from when the card previously sold.

Why the drastic drop? Beats me. But all kinds of things could be at play here.

Perhaps the 2016 sale had two collectors that desperately wanted the item going back and forth, well exceeding the true market value. Perhaps interested bidders the last time around have acquired other pieces or are targeting other items. Maybe potential interested bidders weren’t aware of it. Could be anything, really.

Whatever the case, it’s a brutal reminder that while most pre-war cards are rising in value, some stuff may have peaked. At least for the time being. And as I’ve cautioned before, when you’re dealing with higher end stuff, there’s just inherently more risk if trying to turn a profit because there is a much smaller buying pool than, say, there is for things like T205 beaters. All it takes is one or two fewer bidders to dramatically alter the landscape and cause huge swings in prices.