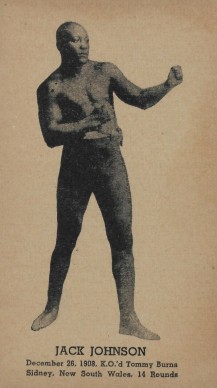 This somewhat mysterious set is believed to have been produced in or around 1946, though it is sometimes said their production lasted many years.

The cards have the look of Exhibit cards, though they are not usually grouped as such. They are called the Kid Herman issue, named for the fighter.

Cards measure roughly the size of an Exhibit card or postcard and picture images of famous boxers against blank backgrounds. Several of the fighters pictured had retired by the time the set was issued. Fronts include an image of the subject along with his name and the result of one of their famous fights.

A few different variations appear in this set as the cards were printed in (at least) blue, black, and red ink. The black ink variations seem to be the most common with blue and red ink variations being significantly tougher to find. They are sometimes called postcards but that is not the case as they have blank backs.

Most cards are printed on a brownish type of cardstock but some cards have been seen printed on colored cardstock. Additionally, while most do not have borders, some of the colored cards do have a thin black border.

The set of 16 cards is believed to have initially been sold for the price of a quarter with cards distributed inside of an envelope. We know 16 cards made up a complete set as that is printed on the envelope.

One of the envelopes is pictured here. This avoids calling the product postcards but does mention they are ‘Postal Card Size pictures’ of heavyweight champions from the legendary John Sullivan to Joe Louis, who was the then current title holder.

The envelope featured a red-tinted photo of Sullivan.

After the printing of this set, seven other cards were believed to have been issued in a second printing in later years. The later seven are: Ezzard Charles, Cassius Clay, Jack Dempsey, Rocky Marciano, Floyd Patterson, Jack Sharkey, and Jersey Joe Walcott. Some of the later cards have been found with a punch hole, though the reason for that is unclear.

Below is the checklist of the original 16.