What’s the deal with Mike Donlin and rarity?

Several cards of the underappreciated pre-war player are considered rarities

Mike Donlin is a name that most modern collectors probably aren’t familiar with. But if you collect pre-war cards, you’ve likely come across it. That’s particularly true if you happen to be a set collector.

Despite being in relative obscurity these days, Donlin was not a common player. His cards are generally considered to be commons but he was a very good player. In fact, he was probably one of the more underrated players in the pre-war era. Donlin played a total of 12 years in the league and compiled a career .333 batting average. That remarkable average is actually 28th all-time in the major leagues. Donlin hit for a higher average than guys like Stan Musial, Rod Carew, Honus Wagner, Jimmie Foxx, Joe DiMaggio, Mickey Cochrane, Zack Wheat, Hank Greenberg, Ichiro Suzuki, Johnny Mize, and many other household names across many generations.

Only once did he hit under .300 and in 1905, he led the league in runs scored. He was also a pretty good power hitter. His ten home runs as a second-year player, for example, were third in the National League that year. He finished in the top four in home runs four different seasons (1900, 1903, 1905, and 1908). He may not be a Hall of Fame player but he was very good.

Many players will have an obscure card in a set for all sorts of reasons. Maybe it was shortprinted on purpose to cut back on the number of redemptions a company would have to make if it offered a prize for a complete set. Sometimes, it was to send collectors on a wild goose chase for a card that was never there, such as was likely the case with Nap Lajoie’s missing card in the 1933 Goudey set. But Donlin has several cards that are pretty rare in some popular pre-war sets.

One of Donlin’s toughest cards is found in the T207 set. Donlin’s T207 card is not only one of his more difficult ones to find, but is one of the rarest cards in the entire set.

To date, PSA and SGC have combined to grade only 22 total and his card is no easy find. Just how tough is it? I settled for this brutal version (pictured right) and still had to pay nearly $300 for it. In more than two years of looking, this was the only one I’ve seen for sale to date. Decent copies, when they are made available, easily top $1,000.

To a far lesser degree, two of Donlin’s T206 cards are also rarer than most of the commons/minor stars in the set.

Donlin has a total of three variations – one of him seated, one of him fielding, and a third with him wielding a bat. But it’s the first two that are the tougher ones.

With only about 420 total graded copies, Donlin’s seated version is often viewed as the most desirable. For years, price guides have heralded this as his most valuable version and that sort of crept into the minds of collectors. To this day, even knowledgeable T206 collectors will often cite this as the best Donlin to have.

However, as I covered in that link above, PSA has actually graded about 100 fewer copies of his fielding card. That one, going by their pop report, seems to be the tougher card to pull. And in comparison to other commons in the set, it is one of the rarer finds.

The card is not overly rare such as the T207 is. But it is still one of the tougher commons in the massive T206 set. 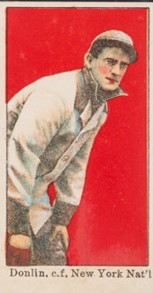 The E90-1 American Caramel card set, like T207, has numerous tough cards. And, you guessed it – Donlin’s card is rare there, too.

To date, PSA and SGC have combined to grade only a total of 61 Donlin’s from this issue. That does not make it the rarest card in the set but it is still extremely tough. As a point of comparison, about 2/3 of the cards in the set have been graded more often by PSA than Donlin’s issue.

Even in low-grade condition, the card generally commands at least $100.

It is worth pointing out the the E91-A Donlin cards appear a little more plentiful as SGC has graded more copies than several other cards. But SGC, like PSA, has graded only two in the E91-B set (Sheckard and Chas Phillipi) fewer times than Donlin.

Other set examples where Donlin cards appear to be a shortage are likely out there as well. I simply noticed these as they were sets I was collecting. I haven’t researched beyond these four issues but I refuse to believe they are the only instances where there appear to be a shortage of his cards. The coincidences are too strange.

Who knows, really. One interesting thing is that player cards are often hoarded. They are not only hoarded sometimes by family members but also by collectors with no affiliation with the family. Donlin does strike me as a player that could be presumably collected by pre-war enthusiasts. He was a very good player that didn’t reach the Hall of Fame and his cards are often regarded as commons. For that reason, it’d be easy to scoop up his cards at reasonable prices and decrease the market on them. But that’s just a theory.

All we really know is that, based on the population reports, Donlin cards are rarer than many others in several pre-war sets, adding to their desirability.