To Slab or Not to Slab: The Graded Sports Card Conundrum

I’ll admit to mostly being a fan of raw cards. Most readers here know what I’m talking about when I use that term but, if you are not, these are cards that have not been graded or authenticated by a third party.

Buying raw cards always presents some risk, I suppose. But that’s also the case in buying graded cards, too. Still, that risk is minimized greatly if you know what you’re doing and you don’t play guessing games as to what a card could grade at. You can hit it big by doing that but in general, it’s not a game you want to play.

Typically I’ve gone the raw card route for buying but lately, I’ve been adding a few more slabbed cards to my collection for an assortment of reasons.

Whichever you prefer, graded or raw, how and what you collect will typically drive the bus when it comes to determining if you need to grade your cards. Here are some of my thoughts on the topic.

My Rules for Grading

So, should you be slabbing your cards? I can’t speak to your personal preferences. But my rules for slabbing are pretty simple and have served me well.

If it’s expensive, slab it – Now, cards in slabs can still be damaged. The plastic cases in which they reside aren’t shatterproof and there’s still a chance mishaps can happen with them. But, in general, I like having more expensive cards protected in them.

‘Expensive’ is a relative term, obviously. My own personal rule is generally to slab a card worth about $300 or more but pick a level that suits you. It can also be a little loose and that’s where the other rules come in. I’ve slabbed less expensive cards and I’ve kept cards raw that have been worth more. I’m in a relatively low-stress environment with no kids and a dog that barely moves around much. But if you have younger kids running around or mischievous pets, you may want to consider that and slab less valuable cards you can’t afford to have damaged.

Resale – If you are planning to keep a card for a long time and not interested in selling it, having it graded may not be as important. But if you have a card you’re expecting to sell soon, you may want to consider grading it.

Value plays a role here, obviously. It’s generally not going to be worth grading a $10, $20, or $30 card if you’re selling it right away. But if you’ve got a $500 card where authenticity will play a role, potential buyers will usually feel more at ease if a card is graded.

Many buyers won’t even touch certain cards over a particular dollar value – particularly if it’s from a seller they aren’t familiar with. Even if you’re 100% a card is authentic and even if a buyer feels good about it, if it’s priced the same as a graded card, you might miss out on a sale.

Good Condition – The reason why most people grade cards is to preserve ones that are in high-grade condition and that’s definitely a good idea.

Obviously, the value of the card plays into it. Is it worth having your nearly perfect Don Mattingly 1991 Fleer card graded? Eh, probably not. Your best bet in that scenario is to have it grade a perfect ten and still have it be worth only about $20-$30. Anything less than a 10 and, considering your shipping/grading costs, you’ve probably lost money. Lots of cards fit that mold.

The condition needs, too, depend on the card you’re having graded. For example, it may not make sense to have a 1970s common card graded if it’s only going to receive a 4 or 5. But if you have something like a tobacco card graded in that condition, it’s certainly worth your time. Without qualifiers, PSA 5 T206 cards, for example, roughly start in the $100-$150 range

If you have really low-grade stuff where extra dings to corners and such won’t matter, grading those is less of a concern. But if even minor damage to a card will significantly alter the value, it might be worth your time. 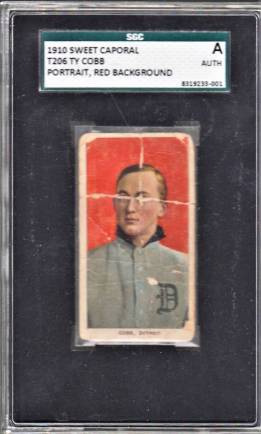 Bad Condition – All of my stuff isn’t in lower-grade condition but much of it is. My general thought with collecting is that I’d rather have more cards and the best way to accomplish that is by spending less on them to buy others. Plus with set collecting, which often involves many expensive cards, settling for lower grade ones makes it easier (and frankly, faster) to finish a set.

If you’re willing to settle for lower-grade cards, that can lead you to some pretty ugly stuff. That, again, is true in set collecting where buying really damaged cards to merely fill a hole happens quite frequently. I try to avoid the really ugly stuff if I can but I’d also 100% of the time rather have a card than not have it – even if it’s just temporary until a better card comes around.

Frankly, I’m not too concerned with keeping a raw $25 T206 in a binder that already has some damage to it. But condition plays a role for me when determining slabbing in two situations. First, as mentioned, if a card is in better condition, I will want to slab it to protect it. What most people don’t realize is that it works the other way, though, too.

Sometimes a card can be in such bad condition that it makes sense to slab it. Cards that are damaged to a point that they’re fragile are good candidates for grading. I’m talking really heavy creases on the verge of a tear, so much paper loss that the thickness of it is compromised, etc.

For example, here’s a Ty Cobb T206 card that I own. I bought it initially fill a hole in a set and just never upgraded it. Now, this card has obviously seen better days. But it’s still Ty Cobb, and even in its present condition, still worth hundreds of dollars. It has several creases, including a small separation/tear. Not wanting to damage it further, I figured slabbing it was a wise thing to do.

Most people only think of grading cards for cards in high-grade condition. While that’s a great idea, grading cards specifically for this purpose is also usually a good idea if it’s a valuable but fragile card. 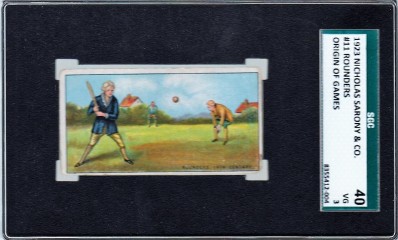 Irreplaceable or Sentimental Cards – We all have them. Cards that might not be worth a ton of money but still mean a lot to us.

While it might not seem this way, there are a lot of these kinds of cards in pre-war collecting. A lot of stuff that seemingly should be more expensive sometimes is not. That’s particularly true for a lot of technically rare things.

I collect a lot of mainstream pre-war stuff but also find myself into the weeds quite a bit on rare items. The rare stuff really fascinates me because the pursuit of it is often long and drawn out.

For me, a good example of this is the card shown here – the 1923 Sarony Origin of Games Rounders card featuring an early form of baseball. Submitting it, I knew it wasn’t likely to get a high grade. But I looked for probably over a year before finding one and am a big fan of this card.

Don’t get me wrong – a lot of the rare stuff is often expensive. But sometimes, it’s less so. The problem is that the rare stuff that takes some time to chase down can be hard to replace if you need to do that. If you’ve got something, even if it’s not technically worth too much, grading it might make sense just for an added measure of protection.