In 1911, the folks at the good ol’ American Tobacco Company were likely having a fine time. They were wrapping up production on their famous T206 set, churning out millions of cards that had spread through the public like wildfire. The conglomerate would be dissolved that year but they still produced the popular T205 gold border issue that season.

The company likely spared no expense in having the artwork for players drawn up. In all, 208 unique card fronts were produced, though there are technically many more given all of the back advertisements for each card as well as a number of errors – some of which are still being found today.

The artwork on the cards was done virtually to perfection. Some collectors even argue that the actual detail on the cards far surpasses that found in the T206 set. And given the striking gold borders, it had to quickly become a favorite.

But just before the set was released, tragedy struck.

Hall of Fame pitcher Addie Joss had pitched only nine years in the big leagues entering the 1911 season, all with Cleveland. But he’d made quite the impression. He never had a losing record as a pitcher and was often flat out dominant, as evidenced by his career 1.89 ERA. Twice he led the league in that mark, including posting an unreal 1.16 ERA in 1908. His worst ERA mark? 2.77 as a rookie. Besides that? 2.26 in his final season. Joss won 27 games in 1907 to lead the league in that category as well and was one of the game’s top hurlers.

But as he was preparing for the 1911 season, he became sick that spring and died shortly after from tuberculosis meningitis. All kinds of tributes, as you can imagine, were made in his honor. In particular, an exhibition tribute game was held that summer to raise money for his family.

Joss likely had a card designed for the T205 set already. Fortunately for collectors, the American Tobacco Company kept him in it and simply made the card a tribute instead. 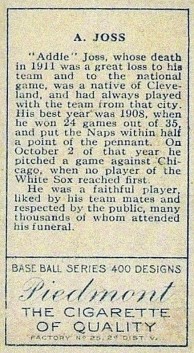 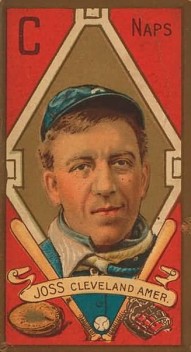 Joss’ card, if you’ve never seen it, is as incredible as any in the set.

His face, like other cards, has all kinds of detail to it and the subtleties, such as the slightly crooked hat, add even more to it. Additionally, I would argue that the red, white, and blue theme with it looks incredible.

I’m also so glad that Joss was an American Leaguer.

If you’re unfamiliar with the T205 set, American League players included in it were set against a baseball playing field. It’s one of the more iconic designs in the pre-war era. The National League cards were good, too – don’t get me wrong. They also allowed the artist to include a slightly larger head on the player, which, when done correctly, made for a great visual. But something about Joss getting the baseball playing field design just seems right. So when you add in the classic diamond background design used on the American League cards in that set, it’s just a very special card.

But for as great as the front is, it’s the back that makes it stand out in an already popular set. Most cards had statistics and biographies of players and T205 was one of the first, if not the first, to pull that trick. But Joss’ card couldn’t be typical as he had tragically just passed away.

So, instead, the company made it into a tribute. Joss’ card reads as follows:

“Addie” Joss, whose death in 1911 was a great loss to his team and to the national game, was a native of Cleveland, and had always played with the team from that city. His best year was in 1908, when he won 24 games out of 35, and put the Naps within half a point of the pennant. On October 2 of that year he pitched a game against Chicago, when no player of the White Sox reached first.

He was a faithful player, liked by his team mates (sp.) and respected by the public, many thousands of whom attended his funeral.

Sure, the company could have gone completely sappy and more overboard than that. No one would have blinked at that given the circumstances. But one of the great things I love about that writeup is that they reminded fans how great of a player he was in addition to the off-the-field stuff. To me, it was really the perfect way to issue the card.

The card, as it stands, is already quite special. However, it is even more desirable these days as it is often believed to be one of the set’s several shortprinted cards. The Joss card is not an easy one to come by and prices for it have climbed in recent years. Today, a modest PSA 3 starts around $750-$850. Anything beyond that, and you’re usually over a grand. Even lower-end ones start around $250-$350.

Given the bumps other T205 and T206 cards have seen in the past decade, it’s a card that appears headed on an upward trend. 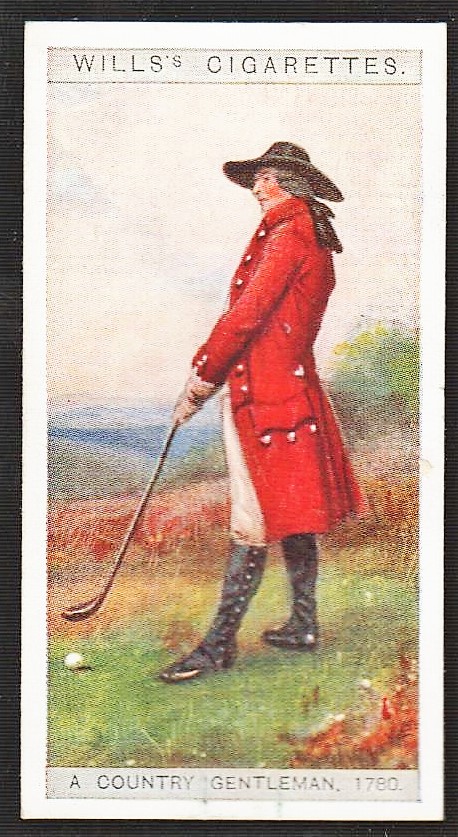