A lot has changed over the years, right? Well, some things haven’t.

The idea of putting pictures of baseball players onto cards is something that’s been around for a very long time as the earliest cards date to more than 150 years ago. But just like today, using a player’s likeness on cards in the pre-war era wasn’t something that was entirely free and you had to have permission to do it.

We all know that from the famous Honus Wagner T206 card, which was reportedly pulled from production because the American Tobacco Company didn’t have his permission to include him in the release. The result was a card that made its way into the public for a very short time before printing of it ended prematurely, causing a great shortage of it and, in turn, making it the most desirable card in the hobby today.

As always, there were challengers to these sorts of rules. Companies that wanted to produce cards of players without forking over the money necessary to use their pictures and names in sets of cards. That practice has continued into modern collecting with a slew of unlicensed sets.

Putting generic pictures of players onto cards is really no good. I mean, these sorts of pre-war cards are certainly collected today and a good number are even heavily desired. But if you were using them to help peddle a product or attract customers, it was much better if you could include a player’s name and picture on them.

But if you couldn’t legally use a player’s name on your product the best way of featuring them was to use a somewhat concealed likeness of them. One where they would be instantly recognized by fans but that would also be ambiguous enough to keep you out of hot water.

The W552 strip cards are a somewhat under-the-radar issue. They were produced by the Mayfair Novelty company in 1919, which is evidenced by the copyrighted name and date found on uncut sheets of these cards. Uncut sheets of these are relatively common and still in existence a century after their production.

The cards featured very generic looking pictures of players in different positions. And instead of real names of players, they are simply called things, such as ‘batter’ and ‘shortstop.’

Shown here, they featured player from two different teams – one wearing a cream-colored uniform and the other wearing a light blue uniform. There are 12 cards in the recognized set, but in all, there are more than 40 including numerous variations.

Unlike some other strip card sets, these weren’t actually all printed in strips. Some were as a 10-card uncut strip of a partial set exists. But a second format is the one pictured here – a 12-card sheet with four rows of three cards in all.

Today, the cards are not abundantly common but are not too hard to find, either. And usually, they can be found for around $10 – sometimes less. Dealers unfamiliar with them will ask for more because they’re old and they don’t want to be taken. But they are easily known in the pre-war community to knowledgeable collectors and not generally expensive.

But while the pictures are supposed to be generic, at least three look very familiar.

The most recognizable pose in the set belongs to a card marked, ‘First Base.’ While it displays a player with a glove, the pose almost certainly belongs to player-manager Hughie Jennings.

Jennings was famous for his antics as a manager and the famous Ee-Yah pose was made with two arms up in the air and a leg off the ground. Comparing the pose to the card here, you don’t need me to tell you the similarities. 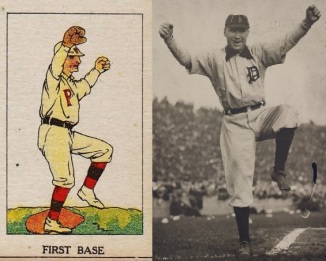 Now, there’s the matter of the ‘P’ on his jersey. But that is because only two teams were depicted – one with a ‘P’ and one with a ‘C.’ Some collectors feel the ‘P’ stands for Pirates and the ‘C’ represented Chicago. But even if those were the teams that were to be represented, this is clearly a Jennings pose. The most likely scenario, then, is that players were included without regard to team affiliation.

Another issue? Jennings was a lefty and he’s shown here as a right hander. But this set had so many issues with reversed printing and so many crazy poses that that hardly matters. One of the two shortstop cards featuring a player pitching. A second shows a centerfielder without a glove running the bases. A third pictures a batter hitting on the wrong side of what is likely to be home plate. There are too many miscues to think that the pictures shown would have players wearing the right glove and such.

But back to the subject at hand. We most often saw Jennings making the pose as a manager/coach. So why would Mayfair have depicted him as a first baseman? After all, Jennings hadn’t really been a regular player since 1902, appearing in only a handful of games late in his career. Well, the card could have been a nod to him in 1918. Jennings played a single game that year and he did so at first base.

For Jennings, it was his first time in the field in a major league game since 1909. In that year, he played only twice but also played at first. In fact, while Jennings primarily played at shortstop, he played a total of 331 games at first base, suiting up there more than 25% of the time over his career.

Okay, so why couldn’t Jennings have been the shortstop card? Well, about that … 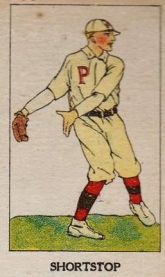 The biggest reason Jennings probably couldn’t be the shortstop in the set is because a far more famous shortstop was featured.

If you look at the shortstop card, the picture here appears to depict Hall of Famer Honus Wagner for a variety of reasons.

One is that Wagner looks to be wearing the correct Pirates uniform. Two things are notable here. First, the presence of the ‘P’, which, as stated, some believe was for the Pirates. But the more important thing here is the style of striped socks. Wagner is pictured in many images with this same style of sock.

Then look at that pose. Wagner has been photographed before with a similar kind of leg kick when making a throw, as shown here. That particular image even has Wagner with the ‘P’ on his uniform as shown on this card. Comparing the two, it just looks like a Wagner pose.

Given that the player shown is also a shortstop, Wagner’s given position, this appears to be another example of his likeness being used without proper credit.

A third potential link with a player to a card in this set is probably a larger, but not utterly ridiculous stretch.

A fielder card in the set is sometimes listed as a Joe Jackson issue. Despite the popularity of Wagner, a Jackson card would probably be even more desirable given his lack of contemporary cards.

So why is it sometimes considered to be a Jackson card? In particular, it has drawn comparisons to Shoeless Joe’s 1914 Polo Grounds game card. 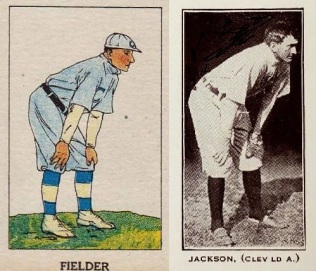 With the two side by side here, it’s easy to come to that conclusion. Certain minor details even stand out. There’s the exact shape of the uniform sleeves sticking out to form a point. He’s wearing a long-sleeved undershirt just as he is on the card. The belt and corresponding loops. Even some of the uniform creases are exactly the same. The biggest difference is that he is wearing a hat on the W552 card while he isn’t in the Polo Grounds card picture. But every other card in the set shows a player with a hat on so it would have stuck out like a sore thumb if one didn’t appear only on that card.

Beyond the similarities in the pose, there is one other noteworthy thing here. And that’s that the player on the card is sporting a ‘C’ and that is something that would apply to Jackson. He not only played with the Chicago White Sox but also spent several years with the Cleveland Naps. Again, the teams could have been generic here. But like Wagner’s ‘P’ uniform card, the ‘C’ would match up with another player in this instance.

So, are these cards featuring the players mentioned? If I had to make a call one way or the other, I would say yes. There are too many similarities between them. But without names tying them to the cards, it may be a while before collectors connect the dots on them.

That’s not to say it can’t happen. Real players are attributed to generic issues all the time. One of the more famous pre-war ones, of course, is the 1929 Churchman/Imperial Sports and Games in Many Lands set, which features a baseball player that everyone knows is Babe Ruth. That card has long since been identified as a Ruth image and is labeled and priced as such despite the fact that his name is not physically on it.