What Happened to the 12 Minor Leaguers in the T205 Set?

There are lots of reasons to love the T205 set, one of the most collected pre-war issues around. For one thing, they’re significantly rarer than the massive (but more popular) T206 set. For another, they’ve got great pictures, a terrific checklist of players, and piecing together a set isn’t impossible.

One of the lesser discussed parts of the set, though, is the collection of minor league players. Those, too, help make this set even more desirable.

Like others in the set, these cards also had the trademark gold borders with the same type of layout on the backs. That’s really where the similarities end, though.

The name and team at the bottom are also distinctly different as those are in a horizontal name plate. Finally, the border for the pictures are also not the same. The picture of the player is found in a frame that kind of looks like a decorative mirror of sorts. At the top are two vertical banners or shields with the first letter of the player’s team printed on them. As is the case with Doc Adkins’ card here, his has a ‘B’ for Baltimore. 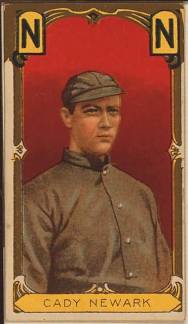 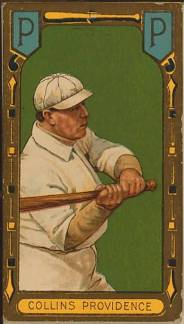 In all, a total of 12 minor league players are featured in the set. Most had insignificant careers but some did a little better.

The cream of the crop here is Jimmy Collins. Interestingly enough, Collins’ major league career had already ended when the T205 set was released. But he wasn’t exactly finished as a player. After hitting only .217 in his last season of the majors, Collins played three years of minor league ball, including two with Providence – the team he is featured with on his T205 card.

Collins must have only just barely made the cut. He did play in 1911, the year the set was released, but appeared in only eight games before his career was over. Despite the lack of relevance of his career at the time, his card is the most desirable one of the minor league subset. Other players took a similar path to inclusion in this set with these minor league cards coming at the end of their major league career rather than the beginning.

After Collins, the only players with more than five years of major league service were Sport McAllister and Hick Cady. McAllister spent seven years with the Cleveland Spiders, Detroit Tigers, and Baltimore Orioles, hitting .247. Like Collins, his major league career had ended by the time his card came out. However, Cady’s was just beginning as he would go on to begin a seven-year career in 1912, playing mostly with the Boston Red Sox. As a .240 hitter, Cady also wasn’t a star but he did manage to win three World Series rings in Boston.

Other players in the set included, Doc Adkins, Emil Batch, Jack Dunn, James Frick, Charles Hanford, Wyatt Lee, George Merritt, John Nee, and James Phelan. They had shorter careers in the majors or did not appear there at all.

Of somewhat small note, Dunn would go on to manage and be a minor league owner of the Baltimore Orioles during the time when Babe Ruth spent a brief stint with the club. It is said that he needed to sell Ruth off (along with other players) to meet payroll and later called it his greatest regret.

While the players for the most part were not stars, these cards are very desirable and sell for more than commons in the set. They are sometimes formally called shortprints while others don’t refer to them that way. Regardless of if they were legitimately shortprinted or not, their cards are not as commonly seen as many others and generally treated as such.

They don’t sell for the crazy prices of some of the extreme rarities in the set, but even poor ones will generally start around $20-$30 for pretty low-grade condition. Collins is the most expensive and hard to get for much under $75-$100.