Ty Cobb Green Background T206 Cards on a Tear but Will it Last?

I’ve written quite about T206 cards lately – in reality, even more than I care to. But they’ve routinely been in the news and remain a hot commodity.

And when it comes to T206 cards, there’s none hotter right now than the Ty Cobb green background card.

That popularity scale pretty much follows the perceived rarity of these cards. As I’ve mentioned before, PSA, Beckett, and SGC have graded just under 1,100 green Cobbs, which is the fewest of the four. Contrast that with the 2,700 red background Cobbs, which is easily the most and you can see why there’d be a significant price bump there.

What is fascinating to me is that the green background cards really aren’t much rarer than Cobb’s bat on shoulder cards. The three grading companies only have slightly more of those on the books with about 1,150. 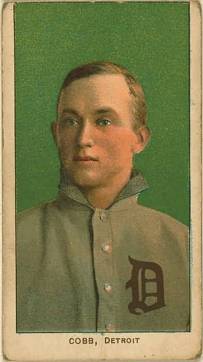 Despite the fact that the green background Cobb cards and the bat on shoulder cards are virtually the same in rarity, the prices are now worlds apart. That’s thanks to a significant increase in price on the green background Cobb card in the past couple of years. Now, the card has always been more than the bat on shoulder variation – at least in recent years. But the disparity has grown to staggering amounts lately.

These days, low-grade Cobb bat on shoulder cards usually start around $700-$800 for a non-beater. Meanwhile, good luck at getting any green Cobb card that isn’t heavily trimmed or a beater for much under $2,000. Consider that with regards as to where the cards previously were. A few years ago, you could get low-grade Cobb bat on shoulder cards for around $500 with Green Cobbs around $800-$1,000.

It’s not just other Cobb cards that the green background Cobb is surpassing, either. The card, once in line with the heavily shorprinted St. Louis variations of Ray Demmitt and Bill O’Hara, has flown by those, too, and is clearly the fifth most desirable card in the set behind the famous Big 4 (Honus Wagner, Magie Error, Doyle Nat’l, and Eddie Plank).

So why is the card rising so dramatically in price? Beats me. As is the case with many cards that take off, there’s often no simple driver behind it. A lot of times it starts with a few higher-than-expected sales, others hurrying to get in, and then full blown madness.

The case of the green background Cobb is a little harder to understand, though. It cannot merely be attributed to an increased demand for Cobb cards in general. I do think we’re seeing that, for the record, but if that were the sole reason here, other Cobb T206s would have experienced similar dramatic jumps.

We could merely be seeing a rise in collectors pursuing T206 sets and team sets. But given how considerable an undertaking is, I’m not sure that’s entirely the case, either.

While others in the T206 set are desirable, there’s a sudden rush to get Cobb’s best T206 card – and that’s the green background issue. So we’re seeing a lot of people targeting not only Cobb cards but that specific card all at once. Then, because the price is on the move, you’ve got the usual investor types throwing themselves into the mix as well, looking for the card even if they don’t particularly need it for a set or some other collecting goal. While somewhat plentiful, demand is outpacing supply, which is pretty much straight out of any economics book when trying to determine why prices rise on anything.

As with most other cards, set collectors, however few there may be, are certainly playing a part here, too. Think back to any set that you ever collected. If one card started rising dramatically in value and you could afford it, the mindset is typically to acquire that card before it does any more damage to your wallet. For ones where the price is out of reach, they’ll hold and hope it gets more affordable. Add in people that are set collecting and you have a whole ‘nother batch of folks with their finger in the batter.

I realize that none of that explains a whole lot, though, and the ‘why’ part of this equation is mostly unanswered. In short, people want it and are paying through the nose for it – that’s essentially it.

So is this a glitch in the Matrix or are these prices here to stay?

I caution not to simply look at the rarity part of the equation. Look at things like the 1952 Topps Mickey Mantle card as a barometer. The card is not all that rare by any measurable statistic yet ones in great condition will buy a nice house and better conditioned ones are topping seven figures. Rarity is really not a factor when it comes to that card and is a good reminder to us that that’s only part of the equation.

I don’t know if the Cobb prices will come down but I would expect some others, particularly the Cobb bat cards to catch up a little, whether that’s because they increase in value or the green background card comes back to earth a little. The case of the Cobbs is different in that regard since three others are in the exact same set and rarity should, and probably will, play a bigger part at some point. The Cobb green background is the rarest card but not by a wide margin. So while I expect it to continue to be the most desirable Cobb, I’m not sure that it will continue to blow the others out of the water once people get wise.

Get wise? What do I mean by that? My guess is that if you asked most collectors to give you the estimated rarity numbers of the four Cobb cards that most could not do it. I sure couldn’t have done it without recently looking them up for that initial Cobb article I wrote. I expect there are quite a few out there that think the Cobb green background cards are drastically rarer than all of the others and that is simply not the case. At some point, I think that information will slowly make it’s way to collectors, who will eventually pursue some alternatives.