Still working on a name for this thing. Until then, though, we’ll stick with Pre-War Bargains.

Last time out, I looked at the 1905 New York Giants postcard, which remains an exceptional buy for a Christy Mathewson piece. This time, I’m jumping ahead a few decades to the 1930s. 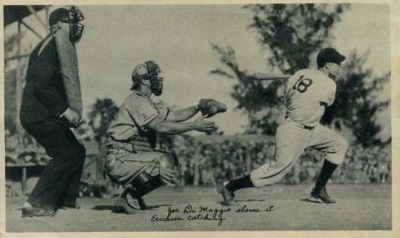 The 1936 National Chicle release was a premium set of small photographs. Printed on a glossy stock, they are paper thin and difficult to classify strictly as a card. However, most collectors do consider them a card of sorts and they’re sought after practically as if they were traditional cards as they have an American Card Catalog designation (R313). They are known as the ‘Fine Pens’ set because the the names or captions printed on them were written with a thin pen.

The whole set is a bargain, really. Many of the photos in lower-grade condition can be found starting as little as $2-$3. I’ve gotten quite a bit off of COMC for under $5 and eBay is a good place for them, too.

My choice for a bargain to watch comes straight from that set and is a Joe DiMaggio card. Any DiMaggio would be notable, obviously, but the reason why this one is so important is because it’s a legitimate rookie issue. DiMaggio does have some earlier Zee-Nut cards and a postcard but those are minor league issues. This is from DiMaggio’s first season as a major leaguer.

DiMaggio’s photo features him swinging the bat with a catcher and umpire behind him. Many of the photos have captions and his reads, ‘Joe DiMaggio slams it – Erickson catching.’ He is wearing an unfamiliar No. 18, perhaps playing in a spring game or something. Baseball Almanac says he wore No. 9 in his rookie year before switching to No. 5 in his second season.

DiMaggio had other 1936 cards so this isn’t his only rookie.

Most collectors, in fact, would call his 1936 World Wide Gum card, a Canadian issue, his truest rookie card since it’s more in line with what a traditional baseball card looks like.

In addition to that one, DiMaggio has some other small photo issues similar to the Fine Pen. He has two cards in the 1936 Goudey Wide Pens (yep, they’re called that because the names were written with a thicker pen) set and is also in the 1936 Colored Photos set. If you’re not particularly thrilled with this DiMaggio, those are other options.

This card is not dirt cheap but it is significantly less than his others. Even the Goudey Wide Pen photos generally cost more. You can get these starting around $250-$300 in lower-grade condition.

Like I said, it’s not dirt cheap. But consider that DiMaggio is one of the iconic players of all time. Try getting something like a Mickey Mantle, Ted Williams, Willie Mays, or Lou Gehrig rookie for that kind of price. Also, compare that to the thousands of dollars you’ll pay for a World Wide Gum card in low-grade condition and it’s downright affordable. If you’re looking for a cheap DiMaggio rookie, this is probably as low as it goes.