Bill Burns, or ‘Sleepy’ Bill Burns as he’s sometimes referred to was an interesting character.

Burns reached the major leagues as a player and, at times, was even pretty decent. He posted an ERA under two in each of his first seasons with the Washington Senators but had rotten luck. Despite barely giving up any runs, Burns was still well below .500 in those years (1908 and 1909) with a 14-25 record. As time went on, Burns’ ERA went up and he continued losing. He was ultimately out of baseball after five seasons, pitching for a slew of teams, including the Senators, White Sox, Reds, Phillies, and Tigers.

While playing in the major leagues for five seasons would often define a person, Burns became known more for being a part of the infamous 1919 Chicago Black Sox scandal. He was believed to be the middleman between the players on the team, who agreed to throw the World Series, and businessman/gambling man Arnold Rothstein.

There’s enough there for a separate article in and of itself but that’s not what I’m interested in, folks. Instead, I want to point out a mystery that has dragged on for decades. 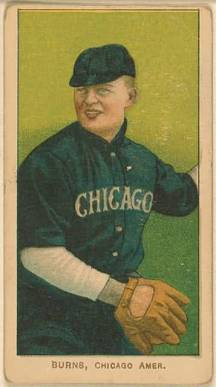 Burns was fortunate enough to have his career run smack dab into the production of the famous T206 set. While he struggled quite a bit later in his career, as stated, Burns was once a promising pitcher, despite his record. After two decent seasons, the decision to add Burns into the set was probably close to a no-brainer due to the large checklist of the release.

At the time of the production, Burns was a member of the Chicago White Sox and is pictured as such. We get a smiling Burns as the left-hander is rearing back to throw. Burns is wearing a dark White Sox uniform and all appears to be mostly normal.

If you just glance at Burns’ card, you might not even notice anything out of the ordinary. But upon closer inspection, we’ve got something that just doesn’t make any sense.

Burns is left-handed and is readying to throw a ball. But the problem is that Burns is shown wearing a glove for a right-hander. We know that because it’s placed on his right hand but doesn’t fit properly. The thumb is in the wrong place on the glove and it’s obvious it’s not on the correct hand.

So what happened here? A few theories exist.

Another idea that has been floated around is that perhaps Burns was goofing off for the picture. T206 cards were drawn from actual photographs and perhaps a picture was used where Burns was merely joking around. Call it his much less vulgar Bill Ripken 1989 Fleer moment, if you will.

A third and much more interesting theory is out there, though. And that is that Burns was ambidextrous.

I’d heard of that idea before but had never thought of this as a possibility. Recently, I happened to be reading Burns’ bio on the SABR website, which offered this explanation from the Minneapolis Tribune.

Burns was ambidextrous; though he never pitched right-handed in a game, he did in batting practice “with considerable speed.

The thing that stuck out to me as a card collector was his weird T206 card with the glove. Now, ambidextrous gloves were (and still are) indeed a thing. Here are photos of them and they’ve been around for more than 100 years. The interesting thing is that some of them even have six finger holes. Why is that important? For that, we have to look at Burns’ Turkey Red card from the same era.

I started poking around looking for other Burns images. Anything to show him with an ambidextrous glove. I didn’t see any real images and nothing really stuck out to me until I went to his Wikipedia page and saw his T3 Turkey Red card. Bingo.

This card is using the same picture as Burns’ T206 card. The only difference is that the T206 card is a ‘zoomed-in’ version and doesn’t show his whole body. The interesting thing about it is that it appears to show Burns with a glove with six fingers.

The T206 artist shows a glove with only five finger holes and perhaps adjusted his artwork because a glove with six fingers didn’t make sense. Or perhaps they obscured the sixth finger. Possibly, even, the glove just looked so weird to them that they did the best they could. But the Turkey Red artist is maybe the one that has it right. Even if Burns didn’t have a six-finger glove, it’s possible that it just looked that way as many ambidextrous gloves appear to have six finger holes.

Here is a close-up of the glove on that card.

The next question is, were ambidextrous gloves even around in Burns’ day? This site says yes. The gloves were apparently first patented in 1911 and even though that is slightly after Burns’ T206 was produced, they easily could have been around in the years before then as unpatented products.

I always sort of just accepted the fact that someone goofed on the card or that Burns, himself, was goofing when the picture was taken. But it’s hard to believe that two artists botched the images of Burns’ glove. His glove may have been unclear in whatever photo they used and that could have led to some confusion.

But given the fact that he was ambidextrous, it’s possible that what we’re seeing is a player actually wearing an ambidextrous glove. And if that’s the case, it makes the card even more special.