In 1913, the Tom Barker Game was released. This game included a deck of cards that were used to simulate real baseball.

The cards were popular because, unlike some other sets, they featured pictures of actual players on them, in addition to printed actions in the border areas to dictate the game play. Many collectors flock to these cards, which are often found in excellent condition and can be more affordable than tobacco and caramel cards.

Cataloged as WG6 by Jefferson Burdick in his American Card Catalog, the set included a total of 54 cards with black and white images and colorful red ink backs.

But while the regular Barker Game cards are somewhat easy to find, a rare variation with a unique overprint stamp is known for a business called Fenway Breweries.

To get a better handle on the Fenway Breweries cards, some context about the business is helpful.

Fenway Breweries was a brewery located in Boston, Massachusetts. To baseball fans, the location would be evident based on the Fenway name as Fenway Park is the home for the Boston Red Sox.

First, the company wasn’t around long. This page says they opened in 1915 and closed in 1918. Those dates will raise some eyebrows of those familiar with this set as the Barker Game set was produced two years earlier. But I’ll get into that in a bit.

The business was located at 89 Conant Street. Google Maps indicates there are several 89 Conant Street addresses near Boston but none in very close proximity to the baseball stadium as they show up around a half hour away in a few different directions.

However, this site provides a bit more information. A brewery operated by James McCormick began at 95 Central Street in Massachusetts in the late 1800s before moving to 89 Conant Street around 1915. He would appear to have started the Fenway Breweries Company since their name popped up at that address at the same time. The company was also known as Fenway Bottling Company. That date is actually 1916 as records show Fenway Breweries was having their plant built by a company called Rams-Dell & Littlefield as announced in the spring of that year.

But the company was later readdressed to 100 Longwood Avenue in Boston around as well, meaning they appear to have had two addresses – both the Conant Street address and Longwood Avenue address. We know they still had a presence on Conant Street because a 1918 Boston Register and Business Directory still listed Fenway Breweries on Conant Street, even though that was the year they ceased operations.

While the Conant Street location doesn’t do much to link the brewery to the Fenway neighborhood, the Longwood Avenue address sure does. That address is right in Fenway and located only minutes away from Fenway Park. The name now makes much more sense given the context of the second address. It is possible they operated out of two locations – both Conant Street and Longwood Avenue.

As for Fenway’s products, they apparently had at least seven:

Not sure about you, but I’ll have the Extra Porter Brown Stout. 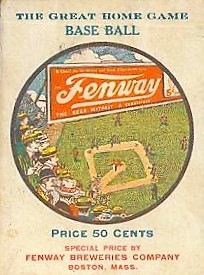 Likely looking for a way to advertise, Fenway Breweries turned to baseball cards. More specifically, they turned to the Tom Barker Game cards.

But, why the Barker set? Well, there seems to be an easy explanation for that.

The Barker game set was produced locally in Boston, right where Fenway was located. The game was developed by the National Baseball Playing Card Company, Inc., which was located in Boston. If that name sounds familiar to you, it’s understandable. The company also produced the WG5 National Game set, which is eerily similar to the Barker Game set.

The National Baseball Playing Card Company was incorporated on February 12, 1913 and dissolved, ironically, in 1915 – the same year Fenway Breweries reportedly opened for business. Using a local game to promote their business made sense.

The company apparently partnered with the game to use the cards to promote their new business. Not only did they use the game but they had their own box created. As seen here, the game was sold for fifty cents and was advertised as a special price by Fenway Breweries. A large Fenway logo on a wall is shown and the field, no doubt, is supposed to represent nearby Fenway Field. 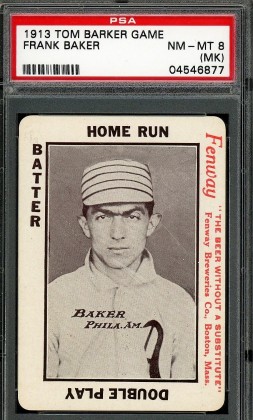 The set included the same cards as those in the regular Tom Barker Game with two exceptions – the Home Run Baker card and the score card.

The Baker card featured his same image and design but was different from the rest. Baker’s card included an overprinted stamp identifying it as a Fenway Breweries issue. While most believe that the Baker card is the only one with an alteration, a score card also had an overprint with only the names, Fenway, Ale, Porter, and Lager on it in the four paths of the baseball diamond. The scorecard did not have any mention of the Fenway Breweries name, slogan, etc.

The Baker card includes a red Fenway stamp along with an advertisement for the company, stating that it is ‘The Beer without a substitute.’ In addition, the full Fenway Breweries Company name is printed along with their Boston, Massachusetts location.

In terms of rarity, the cards are not easy to find. To date, only about a dozen have been graded by PSA and SGC combined. How many of the Fenway sets were produced is a complete unknown.

Of note, of course, is that the cards were produced in 1913 and Fenway Breweries did not begin operations until 1915. A likely scenario probably meant the Fenway had their name printed in either 1914 as they were planning to begin operations or 1915 to promote the company after it had first opened.

One thing that’s confused collectors is why Baker was chosen. He wasn’t a local player. The cards weren’t numbered so he wasn’t necessarily the first one in the set. Even if you go by alphabetical order, Baker’s card still would only be second behind Grover Alexander.

Why exactly Baker was chosen remains a mystery. He was currently playing for the Philadelphia Athletics at the time and while he was one of the best players in baseball at the time, he was not a local product.

Two things come to mind, though neither offers much in the way of concrete proof.

What is notable is that in 1915, the year Fenway Breweries opened, Baker was completely out of the majors. He couldn’t come to terms on a new contract with the Athletics so in 1915, he played baseball for local teams in Pennsylvania, Atlantic City, and Easton. SABR notes that many local towns held Home Run Baker days when he would appear in their towns so it is possible that he played in Boston and that somehow led to an involvement with the brewery. He would join the Yankees in 1916.

There is also a potential link in 1914. That year, Baker’s Athletics played against Boston’s Braves in the World Series. If you’re looking for Baker’s biggest link to Boston around that time, that is almost certainly it. If the overprint was added in 1914 just before the company began operations, that could help explain why his card received the stamp.

But why not a member of the Braves instead? After all, it would make sense to highlight a local player, right? The problem is that the Braves were not a star-studded team, by any means. In fact, only one player from the team was included in the set and that was Bill Sweeney. The problem with using Sweeney is that he was gone after the 1913 season. The only representative in the set was manager George Stallings. There simply were no other Boston players in the set to be used.

Without any proof for either of these cases, though, Baker’s selection remains a mystery. But regardless, it’s a truly rare and unique card.

It should be noted that while most of the known Fenway Breweries overprints were found on the Barker Game cards, they were also printed on the National Game cards as well.

While all versions are rare, the National Game ones are seen far less than the Barker Game cards.