The T206 set is arguably the most popular baseball card set of all time. Printed from 1909-11, it was an obscenely large issue for that time period containing a total of 524 cards.

The set, of course, is also most known for producing the hobby’s most famous card – the elusive (not to mention, expensive) Honus Wagner issue. Don’t be fooled, though – there’s more to the set than that.

One of the trademarks of the set is that it includes a variety of different tobacco advertisements on the backs. That’s because it was used in tobacco products (mostly cigarettes) for many different brands. Some backs, such as Piedmont and Sweet Caporal,  are more often found than rare backs, such as Drum or Broadleaf.

To the subject of the backs, one mystery has caused much debate over the years and that’s the subject of if the T213-1 Coupon cards should be reclassified as T206 issues. 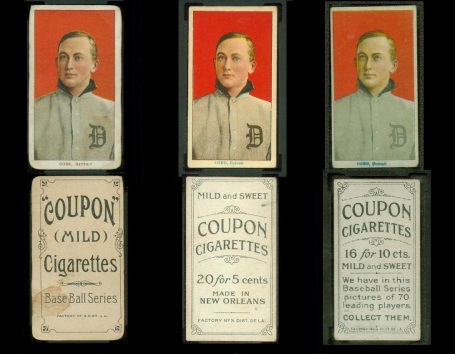 Coupon was another cigarette brand that put its advertisements on the backs of its T213 cards. And if you look at them, well, they look pretty similar to T206 cards – particularly one type.

The three types had different fonts on the front for the name/team (T213-1 has the brown ink used on the T206 cards while the T213-2 and T213-3 sets used blue ink) and different back advertisements, interestingly showing the price increases over time. For example, the second type advertises 20 cigarettes for five cents while the third indicates that 16 cigarettes now cost ten cents.

It should also be noted that a fourth back exists but does not have a separate classification. The fourth back is the same as the third but has a black overprint over the original Factory number at the bottom, replacing it with Factory 8 text above. That, however, is inconsequential here.

Now, all three sets utilized the same pictures found in the T206 set. That, however, is not enough to declare they should be T206 cards. After all, lots of different sets (particularly early caramel and candy cards) used the same artwork.

For the record and as a point of comparison, T213-2 and T213-3 have a different style of border as shown in the picture here. Those were also printed later and, as the T206 printing occurred before their time, they are obviously not T206 issues.

While all of the Coupon cards look like T206s, T213-1 does especially for a multitude of reasons. Let’s take a look at a few.

First, look at the backs. The T213-1 Coupon cards have the exact same back design as American Beauty, Broad Leaf, Cycle, and Drum. The Each of those four cards are considered T206s. The T213-1 Coupons are the only ones that are not, for whatever reason.

As a point of comparison, I’ve shown the back of a T213-1 Coupon here compared to the back of a T206 Cycle. Pretty similar, right? Same border, same font. The only difference here is the Cycle name and the Coupon name, and those varied across all brands. If there’s one piece of evidence that links these two sets together, it’s probably this one. You’ll just never convince me these two sets are not the same.

Second, as stated, the cards used the exact same front design with the exact same images of players as found on T206 cards. Again, that’s not a reason in and of itself that they should be considered T206s, but it’s one piece of the pie and helps build the case.

Third, the font color and type on the T213-1 cards is the exact same as found in the T206 set. It’s the only one of the three Coupon types you can say that for and it’s one big reason that many collectors feel they are in fact T206 cards.

Finally, the production of the T213-1 is believed to have occurred in 1910. That would mean that they were printed during the exact same time as the T206 cards.

In summary, they were printed by the same company using the same back design, using the same pictures, with the same font, and in the same time period. That’s a pretty easy match for me.

Some that don’t feel these cards are legitimate T206 cards point to the card stock. The stock on Coupon cards is much thinner than T206s and there’s no disputing that. But to me, that’s mostly inconsequential. The idea that the printer couldn’t merely use a different stock of paper doesn’t really fly with me. We know based on their rarity that not nearly as many Coupon cards were printed as opposed to Piedmont, Sweet Caporal, or many others. For a smaller print run, it’s conceivable that they would have been less concerned with using the exact stock available.

Better evidence is offered in that all T206s weren’t alike, anyway. The American Beauty cards are narrower than the rest because they had to fit into their smaller boxes. Some have theorized that the Coupon cards were printed on a thinner stock due to packaging issues of their own, such as thicker cards not being as practical or as accommodating to the packaging. T206 cards (and other tobacco cards, in general) were used as stiffeners for the packs but perhaps that was not the purpose of the T213-1 Coupon cards.

In the end, while an interesting piece of evidence, card stock hardly outweighs all of the other similarities mentioned here.

Burdick’s Role and Lack of Information

Many collectors are wary of reclassifying these cards based on Burdick’s designation in the American Card Catalog. That’s more than fair, of course. But it’s also worth pointing out that Burdick did not have all of the information we have today on the Coupon cards.

For one thing, Burdick identifies only two different types of Coupon cards instead of three. He believed only two types existed, one type with a brown font and a second with a blue font. However, we now know there are three different types as two use a blue font (T213-2 and T213-3) and were produced at different times.

Speaking of different printing times, Burdick also did not believe any of the cards were printed during the same time as T206. We now know that the first type was printed in 1910, during the middle of the T206 run. Instead, Burdick listed these cards as a 1914-15 issue.

That’s important. Really important. Why? As he believed they were printed several years after the T206 run, realistically, there’s just no way he could have classified these as T206 cards, even if he wanted to. His mention that they were ‘as T206’, his way of stating they were similar as he did for other issues, was about as far has he could have gone given his believed dating restrictions.

While Burdick did an amazing job with the American Card Catalog, obviously, he simply didn’t have all of the information we have today, through no fault of his own. Other classification errors are known to exist in the book so we already know it isn’t perfect.

So why did he classify the Coupons separately from T206?

First, I’d say that he believed they were all printed later than what we know today, based on his 1914-15 dating. Second, he may have also believed the Coupon cards deserved their own separate classification because there were two different types. No other T206 card had an alternate font type/color for name and team on the front. Because of that, he may have felt conflicted about lumping all of the Coupons in with T206 because some of them had blue and different type fonts. The easy solution was what he chose – to classify them as something else, thus keeping all of the Coupon cards together, and still acknowledge that they used the same pictures and were similar to T206, which he did.

Would Burdick have made a different observation if he had all of the information we do today? My personal belief is yes.

Should the T213-1 Coupon cards be considered as T206 cards? I also believe the answer to that is yes. The similarities are too blatant and, printed during the same time period, I don’t know what more evidence is required.

So the question is, can the classification ever be changed? Well, there are two big sticking points here. First, there is no true keeper of the American Card Catalog after Burdick’s version. So changing it would probably only be acknowledged by the collecting community if it was modified in future publications, such as the Standard Catalog, etc.

Second, old time collectors are often difficult to change and the classification as it’s known today has stood for decades. There will always be pushback on this until completely, definitive evidence is found linking the two.

Personally, I’m fine with keeping the classification as it is. Ultimately. I think it’s kind of unfortunate. By continuing to exclude the T213-1 Coupon cards from the T206 series, we’re left with an incomplete story of T206, which is the most significant baseball card set of all time. That’s sort of a shame and a loss for T206 collectors pursuing back runs, etc. That said, I also don’t know that it’s all that important that the designation change. The basic reality is that a new American Card Catalog has been needed for some time to correct mistakes and add unknown issues but we’ve all managed without one. That likely isn’t happening anytime soon and while I’d love to see a change, I’m not personally expecting to see one.

And somehow, we’ll all manage.