All 1933 Goudey Babe Ruth Cards are not Created Equal

The 1933 Goudey set is one of the most iconic releases in baseball card history. There are any number of reasons to collect it but, aside from the shortprinted Nap Lajoie card, the biggest cool factor for the set easily stems from the four Babe Ruth cards.

Even though one is double printed, many collectors generally lump all of these Ruths together without giving much credence to the fact that one could be better than the others. There is no doubt, though, that the four Ruths shouldn’t be judged equally at least in terms of rarity.

Before we look at what the pop reports have to say about the Ruth cards, though, here they are in case you need to get familiar with them.

This card shows a half-body shot of Ruth in a swing follow-through. It’s easily defined by the full yellow background.

This is the only card of the four that features a full body shot of Ruth. The pose is the same as the yellow and red background parts as he’s pictured in the follow-through of a swing but it shows a larger picture of Ruth in his full uniform with a stadium backdrop. This card is arguably the most attractive and was double printed. Instead of Card No. 106 being added to production sheets, a second Ruth #144 card was instead. This explains the large quantity of them compared to others and confirms its double printing.

This card is the same as the yellow background card but only with a red background instead.

This card features Ruth sitting down with a bat at the bottom.

All four cards are pictured here. 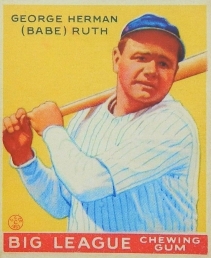 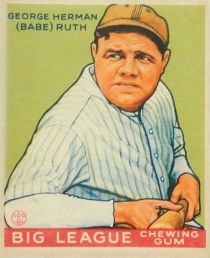 The cards aren’t commonplace but all four cards are relatively plentiful by many pre-war standards. To date, PSA, SGC, and BVG have combined to grade more than 5,000 of the four types combined. But while they aren’t terribly hard to find, one is significantly easier to locate.

Judging by the pop reports, the green background #181 cards are a little easier to find. The three grading companies have combined to grade about 1,300 of those.

Finally, with about 1,550 cards graded, the full body pose #144 cards are the least rare. They are considered to be a double printed card and that makes it little of a surprise that they are the most plentiful in the pop reports.

In other words the rarity looks like this when considering the three pop reports:

Despite that information, there really isn’t much variance when it comes to pricing. Some knowledgeable sellers will ask for a little less for the full body cards that were double printed but to many, a Ruth is a Ruth.

All of this being said, keep in mind that, while the pop reports are generally a decent indicator when trying to compare the relative scarcity of cards, they aren’t fool proof. While unlikely, perhaps some collector is out there hoarding a few hundred raw, ungraded versions of the red background cards and they aren’t as rare as they seem. Or maybe we see fewer green background cards submitted for grading and that brings those closer to the red/yellow background issues.

For now, though, if you’re looking to buy or sell a 1933 Goudey Ruth card, there’s no question that some appear a little rarer than others.