The 1938 Lew Fonseca Kellogg’s Box Panels are a tough issue for pre-war collectors. They aren’t nearly as numerous as the Wheaties issues from the 1930s and part of that probably had to do with the fact that they included generic pictures of an unknown player and baseball tips from former player/manager Lew Fonseca instead of the oversized card format for specific major leaguers that was found in the Wheaties issue. Less collectible and, ultimately, less valued by kids in that era. Fonseca’s name was used in the promotion but his picture didn’t appear on the panels.

But while you might have heard about this rare issue, what a lot of people don’t know is that the panels were part of a much larger Kellogg’s promotion for an actual baseball school – more specifically, baseball clinics. 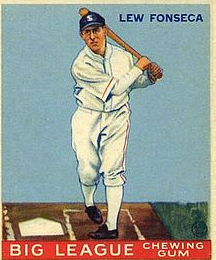 The entire program for the clinics really revolved around the involvement of former player Lew Fonseca. By 1937 when the program began, Fonseca had been out of the majors for several years. The last time he was seen was as a manager for the Chicago White Sox in 1934 and he last played in 1933 for the team.

But even though Fonseca was out of playing and managing, he remained close to the sport. He got more heavily into production in the 1930s and had a pretty long career in filming baseball highlights.

While other players and coaches were involved (some with bigger names), Fonseca was really the centerpiece. He was used as the spokesperson of sorts with his name appearing on the Kellogg’s box panels. He also was listed as the writer of a promotional book that detailed the clinics. And he, of course, appeared in those clinics. Not only did he appear in them, in fact, but he was listed as the overall director.

In 1937, Kellogg’s received a copyright for the Kellogg’s Baseball School name, according to the Library of Congress’ catalog from the copyright office. Aside from the copyright number (23968-23971), the only other piece of information was that it was granted on June 19, 1937 and included the phrase, “Calling all boys, come to Kellogg’s Baseball School.” The company could have simply used that phrase in their advertising and called it a day. However, they chose to copyright it as it sort of became a calling card for the school.

The ‘school’ began the same year of the copyright – and shortly afterward. The copyright was received in June and advertisements ran for the school in the Chicago Tribune in July, advertising the participation of Fonseca and other instructors. It appears as if there wasn’t much time to waste in securing the copyright.

Advertisements ran in the Chicago Tribune newspaper because in 1937, the clinic was only in that city as part of a trial run. That city was likely chosen since it was where Fonseca last played and managed as a member of the White Sox. Chances are good that he lived there. The response was overwhelming. More than 40,000 children participated over a ten-week period as the clinic was at various playgrounds in the city. A playoff/championship game was held afterwards and a whopping 20,000 people came just to see that. Whatever strategy Kellogg’s took, it had paid off in a big way.

The plan, now, was for national expansion.

After the success in Chicago, Kellogg’s wanted to run these clinics around the country. The first step was to produce a promotional book explaining the school’s efforts in Chicago and explain the steps for national growth. In 1938, the clinics were to be held in Boston, Chicago, Detroit, and Philadelphia. I’m not sure how the books were developed but they aren’t too hard to find today online.

In it, the book (with Fonseca listed as the author) outlines two simple steps for growing the promotion. Both parts revolved around those box panels (one is shown here along with the book).

First, Kellogg’s would use Fonseca’s name on a series of baseball tips to get kids prepared and interested in playing baseball in general. These were printed on the backs of their cereal boxes with a total of 12 in the series. The tips covered all sorts of things, such as how to pitch, hit, play the infield, play the outfield, catch, and play specific positions. A picture of a generic fielder was used to mimic the motions.

Second, the company would advertise ways that children could obtain the necessary equipment to play. The bottoms of the panels on the back included a special offer to obtain Spalding baseballs. In addition, the sides of the boxes also advertised other equipment that kids could receive in exchange for box tops. In their promotional book, Kellogg’s suggested that the school was an efficient way to not only equip the next generation of baseball players but also to get them top-level instruction.

Kellogg’s followed through with the planned expansion in Chicago, Detroit, and Philadelphia, but I wasn’t able to find any mention of clinics held in Boston. And in addition to Philadelphia, it appears that the clinics were held in other nearby cities, too, including Allentown, Reading, Harrisburg, and York, PA, as well as several other nearby cities.

The clinics were free and participants only had to show up with a glove. Kellogg’s provided the bulk of the equipment.

Newspapers from those cities advertised the promotion again in July and August of 1938. The idea, however, seemed to be slightly altered. Instead of running the ten-week camps in every city, some were limited to a single day. For example, the York camp was only on July 22nd, according to the York Gazette and Daily newspaper. A week later, the Harrisburg Evening News said the clinic was coming there on July 29 with the same instructors. The idea was pretty clear – instead of only spending so much time in one large city, run a bunch of shorter clinics in smaller ones.

The clinics were outdoors and that caused problems, too. The July 22nd event in York had to be rescheduled until August because of rain. It isn’t known if weather affected any other areas at any point.

With more cities, more instructors were needed. Kellogg’s added a bunch of talent to the roster, including former players and managers, such as Connie Mack, Jack Coombs, John Barker, and Ira Thomas. That group taught around the Philadelphia-area clinics.

The End of the School

For whatever reason, the school appears to have ended in 1938. That, perhaps, was understandable with that year bringing about the start of World War II. Maybe logistically, it became too much of a mess. Or, possibly the plan was to end things in 1938, anyway. I haven’t seen any references to the school beyond that year.

A lack of success doesn’t appear to have been the reason. Prior to the start of the clinics in the Detroit area in 1938, the Detroit Free Press estimated a whopping 50,000 kids would participate. Others were, of course, much smaller. The smaller cities around Philadelphia, for example, anticipated a few hundred at each clinic. But overall, factoring in whatever Chicago did (and Boston, if the school was held there), it was much larger than the successful 1937 year.

The school only apparently lasted for two years but considering that tens of thousands of kids got to attend free clinics from major leaguers, it was a pretty successful idea.