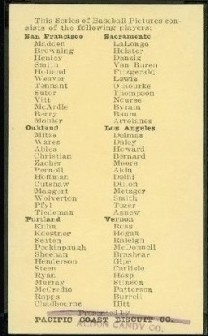 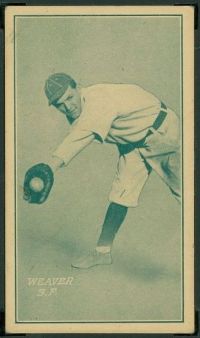 This unique set featured minor leaguers from teams in the Pacific Coast League. While the D310 set was technically distributed by the Pacific Coast Biscuit Company, a candy company added their overprinted stamps to the back, thus, creating somewhat of a new set.

The Aldon Candy Company added their purple overprinted stamps to the back. The cards I have seen to date have this stamp at the bottom over the Pacific Coast Biscuit Company name, making it a bit hard to read. However, I am not sure if the placement of the stamp has been anywhere else on the backs.

The D310 set largely contains minor players – some of which made it to the major leagues. Easily the prize of the set, though, is Buck Weaver. Weaver is famous, of course, for his role on the 1919 Chicago Black Sox team. Banned with other members of the White Sox for the gambling scandal surrounding the 1919 World Series, his cards are in high demand.

There are a few other interesting players here and a few sought after cards by collectors. Overall, though, Weaver is by far and away the key to the set. In all, the six Pacific Coast League teams are included (Los Angeles, Oakland, Portland, Sacramento, San Francisco, and Vernon) with 12 players from each squad represented.

However, like most cards with overprinted backs, it is not known if every card can be found with the overprint. Nor is it known how many of these cards the company stamped.

While collectors value overprinted stamps and they add significant value in other sets, these cards mysteriously have not gained much traction over the years in terms of earning a premium.

Presented here is the entire checklist for the D310 Pacific Coast Biscuit set. As stated, it is unclear which of these cards can be found with the overprint.